With IFA around the corner, it’s time for manufacturers to put out their wares. And French OEM ARCHOS will definitely not be left behind. It isn’t anything out of the ordinary for it to announce new members of its Android smartphone roster but it is somewhat a surprise, perhaps even a pleasant one, to see it put out a Window 10 smartphone. This makes it one of the first few manufacturers to reveal a new device that will run Microsoft’s new OS tailored to fit small sizes.

At the top of the list is the Diamond S, the latest and so far only other member of its top smartphone line. The name suggests premium and, to some extent, it delivers but on a tighter budget. The handy 5-inch screen goes only up to 1280×720 pixels. There is an octa-core CPU from MediaTek that runs at 1.5 GHz at the fastest. 2 GB of RAM might be OK, but the 16 GB storage might not. Thankfully, there’s room for a microSD card. The smartphone runs Android 5.1 right off the bat. It does boast of a 16 megapixel camera on its back, with a selfie-loving 8 megapixel on the opposite face. Appearance-wise, the Diamond S plays the premium part, with a sleek and slim physique and a glass finish. In all honesty, you might easily mistake this for a more expensive Sony Xperia.

The 50e Helium and 50 Cesium are practically identical twins, separated at birth and differentiated by their upbringing. Both lie squarely at the low-end, powered by a Qualcomm Snapdragon 210 CPU, assisted by 1 GB of RAM. Storage is at 8 GB but microSD card expansion is capped at 32 GB. The 5-inch display also bears 1280×720 pixels. Don’t expect too much from the cameras, though, at 8 and 2 megapixels, back and front, respectively. 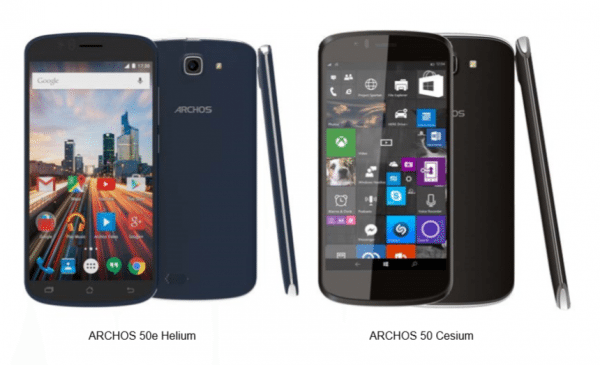 The 50e Helium runs the latest Android 5.1 just like its other Helium brethren. The 50 Cesium, on the other hand, will be running Windows 10. Considering the novelty of that OS, this might be a bit more interesting. That means Cortana, Office mobile, and, of course the promise of Continuum and Univeral Apps. All of which still have to validated in the wild.

All three smartphones will launch in November. The ARCHOS Diamond S will go for 159.99 GBP ($251). Both 50e Helium and 50 Cesium cost only 99 GBP ($155). The launch of the 50 Cesium would imply that Windows 10 Mobile will already be available by then. All three will also be on display at IFA 2015, though considering Microsoft is still keeping Windows 10 Mobile under wraps, the 50 Cesium might be seen running either with Windows Phone 8.1 or a very early Windows 10 build.