We’re not exactly used to Archos making waves within the tablet industry, but the company definitely turned some heads when it announced its new GamePad last year. The idea is simple: make an Android tablet and give it physical controls for gaming. Mobile gamers frequently complain about touch controls and how they’re not usually as good as dedicated controls, so why not?

As it turns out, the idea of putting physical buttons and thumbpads on a tablet isn’t quite as crazy as it seems. Adjusting to the GamePad’s controls will definitely take a bit of time to get used to if you’re a daily tablet user, but gamers who use Xbox 360 or PS3 gamepads on a regular basis will probably feel right at home. The GamePad is lighter and slimmer than I expected too, though the downside to this is that it doesn’t feel like it would stand up to much abuse.

Unfortunately, not all games are going to work with the GamePad’s physical controls right from the start. Some will, but for others, you’ll have to map the controls yourself. The process of mapping the controls to the buttons seems pretty straightforward, and of course, you can always use touchscreen controls if you don’t have the the time or the desire to deal with mapping. 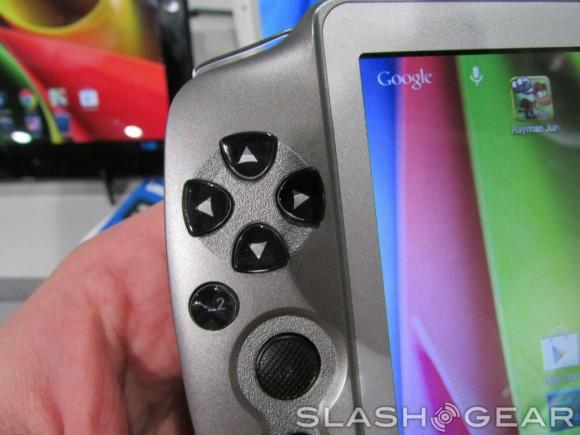 You’ve got a 7-inch 1024×600 display to work with, and though it looks decent, it didn’t look as sharp as I think a display on a gaming tablet should. A 1.6GHz dual-core processor and a quad-core GPU are working on the inside, so the GamePad should be able to handle most of the games you download from the Google Play Store. It definitely isn’t the best tablet we’ve ever seen, but it does get the job done and the physical controls are great for those who would rather stay away from touchscreen controls. For $169.99, that’s about all we can ask for. Be sure to check out our CES portal for much more from the show!