Archos is hoping that embracing more open standards will propel its home automation platform into contention, adding IFTTT support among other things to its Connected Home system. Officially launched back at CES 2014, and promising a mixture of wireless security and convenience gadgets that hook up to an Android-based tablet, the system is now gaining IFTTT (If This Then That) support, the “platform glue” which can link devices and services from different manufacturers together, triggering cascades of actions in the process.

Exactly which actions and triggers – the “outputs” and “inputs” of IFTTT – will be supported by Archos’ system are unclear at this stage, since the Smart Home platform isn’t yet showing up as a channel for the service. 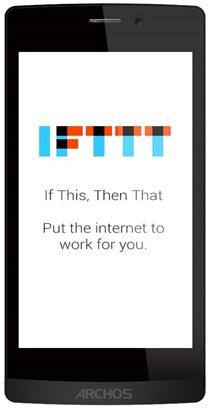 However, according to Archos there will be the ability to “automate common tasks” such as switching on a connected thermostat when presence is detected, or remotely triggering lighting from particular tweets.

It’s not the only change that has been made. There’s now Foscam security camera support, too, which will allow the IP cameras to beam their video directly into Archos’ Connected Home app. It’ll also mean that camera recordings can be triggered by other components in Archos’ system, such as a door sensor opening.

The platform already had support for the 433MHz wireless band, which is commonly used for devices like wireless garage door openers.

It’s also an opportunity for a price cut, with Archos trimming the Tablet Gateway to $99.99.