The feather-laden dinosaur Archaeopteryx lithographica* was a flying dinosaur. The first fossil feather ever found was once believed to have originated from Archaeopteryx. In a study published this week, doubts have surfaced that this feather belonged to said creature. This study also made clear the value of Laser-Stimulated Fluorescence (LSF) on old fossils. Using LSF on old fossils, new information can be found.

Since the discovery and documentation of a fossil feather from the Solnhofen quarries. This single feather, discovered in 1862, was the first fossil feather ever discovered by modern humankind. The calamus – the quill bits – of the feather were shown in the original research paper published on the specimen, but do not appear in the specimen itself.

*Archaeopteryx lithographica means “ancient wing of printing stone.” It received its name upon the discovery of the stone we’re talking about today. As such, its name might not make as legit an amount of sense as it once did – we’ll see!

As the calamus could not be seen by the naked eye, researchers went in with x-ray fluorescence and UV imaging to see what they could see. They saw no quill or quill-like bits. This is described in the new research paper as the “mystery of the missing quill.”

Research done for this new study utilized Laser-Stimulated Fluorescence (LSF) to attempt to detect unseen chemical leftovers of what must have once been in place. As they used LSF, researchers detected in this specimen the geochemical halo of the original calamus, exactly as it’d been illustrated in the original research. 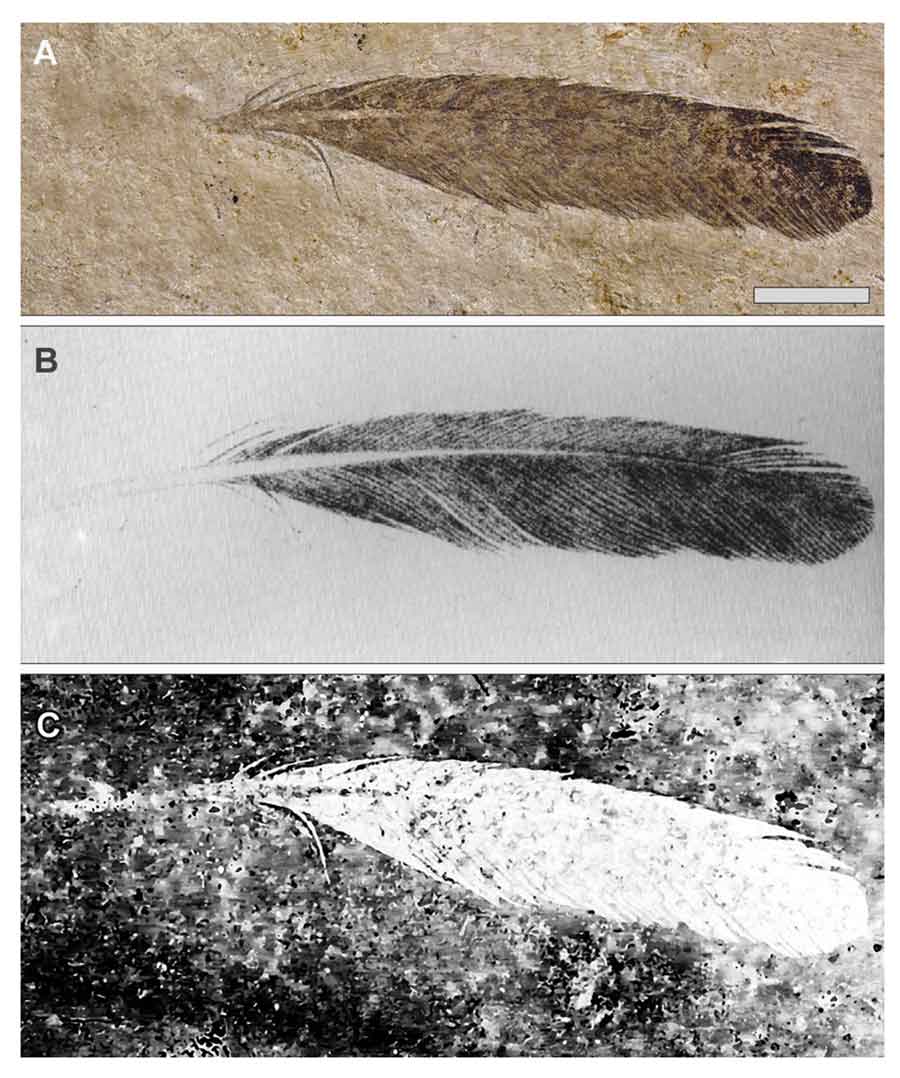 What happened to the calamus? It would seem that there might’ve been a mishap. “Microscopic examination revealed past preparation had engraved around the outline of the feather and inadvertently prepared away the calamus at some unknown point in the past,” indicates the new research. “Thus, the recovered geochemical halo is a chemical breakdown residue fluorescing immediately beneath the surface of the original carbon or manganese dioxide film.”

This new research suggests that the feather may not actually belong to Archaeopteryx, and in fact wouldn’t be attributed to Archaeopteryx if it’d been found today. Impressions of feather parts found preserved in more complete Archaeopteryx fossil compositions are different enough from this original feather that the researchers on this project “caution against the isolated feather’s association with Archaeopteryx.”

They also suggest, in their research, that “based on known feather preservation in Archaeopteryx, this study raises the possibility that the isolated feather may belong to another basal avialan or even a non-avialan pennaraptoran, increasing the low theropod diversity of the Solnhofen Archipelago.” It might be from something else, and if it is, there’s more out there than we knew about before now – imagine that!

NOTE: The above illustration of the dinosaur of which we speak today was created by artist Todd Marshall

Now, off to use LSF on the rest of the fossils sitting in museums around the world. There’s more invisible bone remnants to be found, and more dinosaurs to be uncovered – en masse!

For more information on this subject, see the research paper Detection of lost calamus challenges identity of isolated Archaeopteryx feather as published in Scientific Reports. This paper can be found with code DOI:10.1038/s41598-018-37343-7 authored by Thomas G. Kaye, Michael Pittman, Gerald Mayr, Daniela Schwarz, and Xing Xu in the February 4th, 2019 issue of this scientific publication.