As I’m sure you’re very much aware, Apple released news of a brand new set of MacBook Pros this morning, and along with them has come something called a Thunderbolt. It’s a relatively brand new bit of technology, this Thunderbolt, that was developed by Intel under codename “Light Peak” and promises to be the new name in data transfer between devices. How fast is it? Why it’s 12 times faster than FireWire 800 they say, 20 times faster than USB 2.0, quicker than a speeding bullet!

The big number being touted by this new technology is 10-Gbps – that’s gigaBITS. What this number represents is 1.25-gigaBYTES of data traveling from one device to another inside 1 single second. The closest technology to this kind of speed that’s been adopted by any sort of wide-spread device at this time has been USB 3.0, a version of USB sort of skipped over by Apple, which at its fastest only goes half the speed of Thunderbolt.

In addition to this speed, Thunderbolt is able to daisy-chain multiple devices without a hub – an ability USB has never had. With this ability, Apple is saying that a single MacBook Pro is able to support six devices, making it easy to hook up to one of those fantastical 6-display setups you’ve seen in your gaming or video-editing dreams.

Additionally, Thunderbolt is bi-directional AND is 10-Gbps of data AS WELL AS 10-Gbps of video. What this means is that in theory it’s actually 20-Gbps which means it could easily send 4 or 5 uncompressed HD videos to TWO 27″ Cinema Displays. Fantastic! 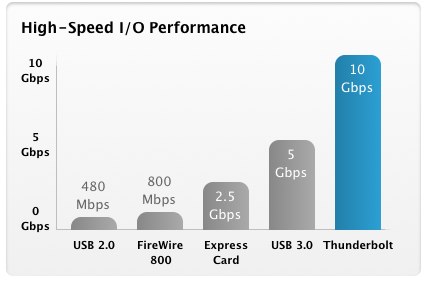 Is it a new port then?

But why didn’t they just, I dunno, upgrade USB or FireWire?

It was Apple, if you’re not familiar, who was originally responsible for developing FireWire in the early 1990’s to work as a means to fast disk access and streaming of video and audio date. Intel then created USB as a peripheral standard with slightly lower speed than FireWire. At some point in there, Apple adopted USB, showing their love for it by having it be the only serial port on the first iMac. After that, Intel released USB 2.0 which immediately started competing with FireWire, USB becoming cheaper all the while, FireWire remaining more expensive as it devices that use it need more sophisticated controllers. What does ThunderBolt do? It blasts Apple ahead with speeds way above any FireWire port with a simple and easy to implement new system.

And the best part? Well not the BEST part, but a very interesting part? The PCI Express design of Thunderbolt allows it to work with USB or FireWire, cords going from one to the other, eventually (we’re not sure why not immediately,) allowing Apple to drop all of the other ports altogether.

What about my USB-powered external harddives?

Thunderbolt supports electrical power for bus-powered devices, meaning they’ll need no extra power plug hanging from the wall. PCI Express support is already included in Intel’s mobile and desktop chipsets, making it simple to add to all new systems. Finally, again I must state the fact that this port works backward with the DisplayPort plugs that would have been plugged into that port before in addition to new PCI Express signals makes this out to be what appears to be a godly new system as chosen by Apple as one of their new standards. Sounds pretty neato!