Last week it was revealed that Apple had requested and was granted permission from the California DMV to test its own self-driving technology on public roads. Now documents that were filed as part of the application have been published, and they detail the safety and training procedures for employees who will work with the software platform and act as backup drivers to take over the controls when needed.

The documents are titled “Development Platform Specific Training” and refer to the self-driving car platform as the “Apple Automated System.” Obtained by Business Insider, these pages indicate that Apple will be using three 2015 Lexus RX450h SUVs as their test vehicles, with six certified drivers.

These drivers must pass seven different tests, which include basic maneuvering and taking control of the vehicle during specific situations like a tight U-turn or sudden acceleration. Each test requires two practice runs and three trials in order to pass. 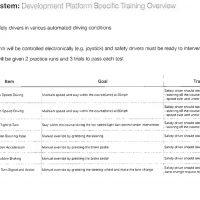 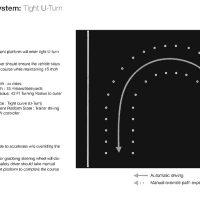 Other tidbits include the use of hardware like a Logitech steering wheel and pedals paired with the self-driving software, allowing drivers to actuate drive by wire. When a driver needs to manually take control, they can override the autonomous driving system simply by grabbing the steering or pressing the brake pedal, while presses of the accelerator will leave the system in control.