Apple‘s new EarPods certainly look like they’ll offer an improvement over the older earbuds, but just how much of an improvement is there? That’s what the folks at iFixit are determined to find out, putting the EarPods in the spotlight as the subject of its latest teardown. Using an exacto knife, a metal spudger, and an iFixit-branded guitar pick, the iFixit gang pried and pulled apart the redesigned EarPods to see if they really can boast significant improvements over Earbuds of the past.

Almost right off the bat, iFixit expresses doubt that the EarPods’ single-driver setup can offer quality to match other headphones that cost hundreds of dollars for just $29, like Apple claims. After running through the aesthetic changes Apple has made with this latest iteration, the iFixit crew gets to work pulling them apart, starting with the redesigned remote. On the inside, the remote isn’t too terribly different from the one found on the old earbuds – it still sports three buttons and a microphone – but iFixit points out that the sealing on this new remote is much better than the sealing on the old one, meaning that you don’t have to worry about water making your remote non-functional as often. 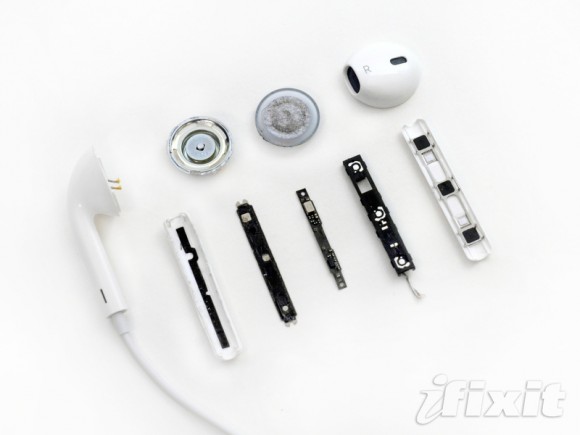 After the remote has been removed, it’s time to dig into the actual EarPods. Since they can’t be pulled apart, iFixit had to get in there with an exacto knife, something the team doesn’t suggest regular consumers do. Once inside, we’re greeted by a diaphragm, a voice coil, a magnet, and a cabinet, which make up the speakers. iFixit found that the diaphragm consists of “a paper cone and a polymer surround,” which is a first for Apple; normally, the diaphragm is all plastic. Despite the fact that these EarPods look quite different from the regular old earbuds on the outside, on the inside, they look pretty similar. 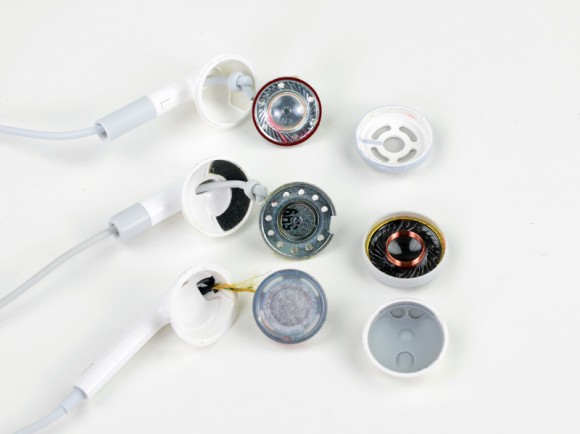 The image you see above is a shot comparing the new EarPods (bottom) to the first generation earbuds (middle) and the previous generation earbuds for iPhone (top), with iFixit stating that the biggest differences are the EarPods’ new design and the new paper cone. iFixit says that these do make some significant durability improvements over past versions, pointing once again to the better-protected remote and saying that the paper cones mean that you’re less likely to blow out your drivers. However, it’s important to keep in mind that repairing these guys is essentially out of the question, considering that they’re hard to get into and cheap enough that you’ll just want to buy a new pair if yours ever break.

iFixit’s full teardown is very fascinating, so if you have a few minutes, be sure to read through the whole thing. What do you think of Apple’s new EarPods?