Apple‘s Steve Jobs allegedly threatened Palm with a patent nightmare if the company’s execs didn’t agree to a no-hire talent poaching policy, new court filings suggest, with Google, Intel, and others all cited as implicit in the pact. Jobs’ proposal, detailed by a legal filing quoting former Palm CEO Edward Colligan, was made back in 2007, with the Apple co-founder concerned about employees switching between the big names in tech at the time, and heavily suggesting that Palm should opt in to a no-hire treaty, or face a potential firestorm of patent lawsuits.

“In 2007, I received a call from Steve Jobs, the Chief Executive Officer of Apple. In the months before the call, several employees had moved between the two companies. On the call, Mr. Jobs expressed concern about employees being hired away from Apple by Palm. As a solution, Mr. Jobs proposed an arrangement between Palm and Apple by which neither company would hire the other’s employees, including high tech employees. Mr. Jobs also suggested that if Palm did not agree to such an arrangement, Palm could face lawsuits alleging infringements of Apple’s many patents” Edward Colligan, ex-CEO, Palm

The threat was detailed as part of a civil lawsuit by five in the technology industry, who claim Apple, Intel, Google, and a number of other firms all secretly collaborated to keep wages down. According to emails sent from Colligan to Jobs, the Palm CEO refused to agree to the pact, describing it as “not only wrong” but “likely illegal”; he also counter-threatened with patent lawsuits of his own. 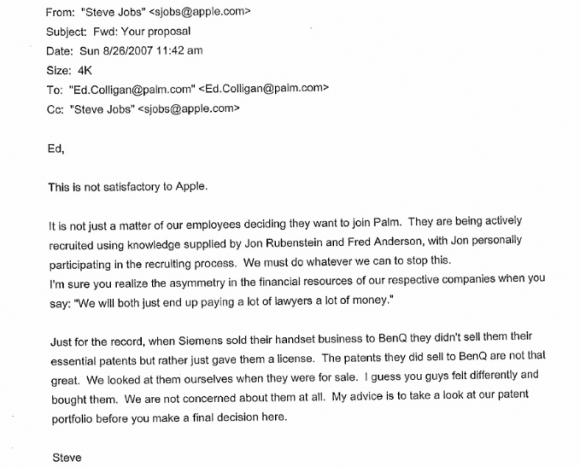 That didn’t apparently worry Steve Jobs, who in reply made reference to the difference in legal budgets between Apple and Palm – writing “I’m sure you realize the asymmetry in the financial resources of our respective companies” to counter Colligan’s argument that the only outcome of a patent fight would be richer lawyers – as well as belittling Palm’s patent strength itself. “My advice is to take a look at our patent portfolio before you make a final decision here” Jobs concluded in his email.

Elsewhere in the case, Google’s Eric Schmidt will be questioned by lawyers in February, after supposedly telling the company’s human resources director to keep no-hire agreements off the books so as to avoid legal headaches down the line. Asked about whether Google should share details of the agreements with others in the industry, “Schmidt responded that he preferred it be shared ‘verbally, since I don’t want to create a paper trail over which we can be sued later?'” according to a filing.

Today, Google maintains that it has “always actively and aggressively recruited top talent,” while Apple has not yet commented on the claims. Palm owner HP is also yet to comment.

[via CNET; via Apple Insider; via Reuters]