Apple’s HealthKit is not quite ready for prime time [Update]

Something seems to be wrong with HealthKit. This morning, several Developers noted that Apple had unceremoniously removed their offerings from the App Store, just hours ahead of the launch of iOS 8. Among them are apps from major portals, with one Developer reporting it’s a problem on Apple’s end.

News of Apple’s issues come from Carrot Fit Developer Brian Mueller. It seems he got a call from Apple this morning, giving him the “it’s not you, it’s us” line. Oddly enough, Mueller tells 9to5Mac that users who managed to get their hands on Carrot Fit ahead of the pull are reporting no issues with any HealthKit capability. 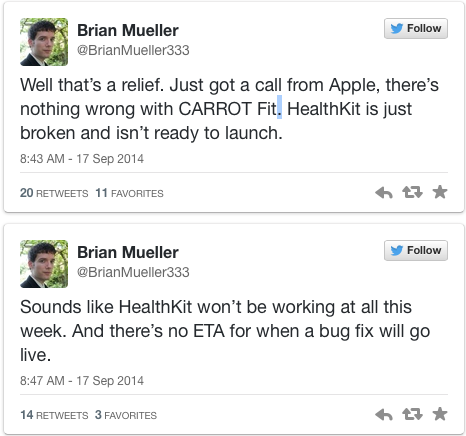 Save for a hard reason as to why these apps were pulled, we’re left to speculate. HealthKit was first announced back at WWDC in June, and is Apple’s backbone for their consumer-facing Health app. We’ve since heard various reports that Apple was working with several healthcare providers to make HealthKit — and, by virtue, Health — more robust.

The cause for the delay on HealthKit isn’t clear, but is iOS 8 complete without it? Aside from HealthKit issues, we’re hearing some Continuity features won’t roll out until OS X Yosemite does later this year. We haven’t yet heard a date on when that may be, but an Apple event rumored to be planned in October could provide a go-live date (is that a HealthKit joke? I’m not sure) for both of these features.

Update: In an email response sent to several media outlets, Apple had the following to say about HealthKit’s issues: