Apple’s new MacBook Pros were dealt a significant blow this week when Consumer Reports failed to give the laptops its highly desired recommendation, a first for long-popular line of notebooks. As for the reason, Apple touts that the latest MacBook Pro offers users up to 10 hours of battery life, but Consumer Reports‘ tests found this to be far more inconsistent, with battery life varying widely from times including 3.75 hours to 16 hours.

In response to this, Phil Schiller, Apple’s Senior VP of Worldwide Marketing, posted on Twitter that the company is now working with Consumer Reports in order to understand their testing process, adding that their results do not match their Apple’s lab tests or field data. 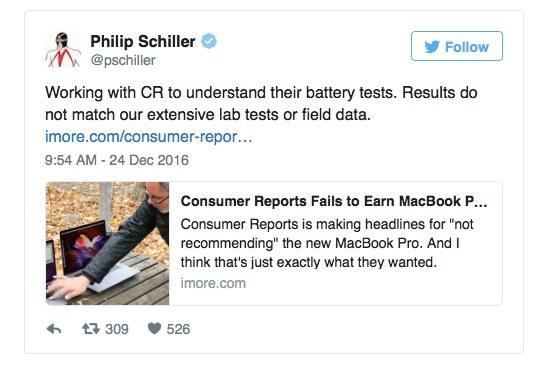 Consumer Reports acknowledges that it’s common to see battery life vary depending on how the laptops are being used, etc., but they found the performance of the new MacBook Pros to be far outside the norm. They found that the 13-inch MacBook Pro with Touch Bar had battery life times between 16 hours and 3.75 hours, while the 15-inch model ranged from 18.5 hours to 8 hours of battery life.

However, there has been a lot of criticism aimed at Consumer Reports for their testing methods, which included opening 10 pre-selected webpages in Safari. When they switched to using Chrome, they found battery life remained consistently high.

In their review, Consumer Reports noted that it would give the MacBook Pro a fresh set of tests if Apple released a software update that improves battery performance, so there’s a chance this could all be addressed, with users getting better laptops and Apple receiving its recommended rating.