Now that the Apple Watch is arriving for customers around the world, and all the dust from the unboxing madness is beginning to settle, it’s time to talk about some of the smaller, overlooked details of the new device’s launch. That includes the real star of the Watch’s launch in the UK: the new folding prong power adapter! While Apple’s new 5W USB power adapter still performs the same function as before, namely to charge your new Watch or iPhone, the folding pins design is new.

The new 5W power adapter comes packaged with the Apple Watch not only in the UK, but in other countries with type G power outlets, namely Ireland, Singapore, Hong Kong, and Malaysia. Apple is also selling the adapter individually on its UK online store for 25 pounds (about $38 US), while the non-folding model can also be purchased for 15 pounds ($23).

While a new charger may not be a big deal to most users, the real advantage of the folding design is that it offers a much thinner profile when closed in comparison to the fixed pin model. This makes it easier to pack for travel, and prevents damage to the prongs when not in use. You can see the awesome folding mechanism in action in this Vine video. 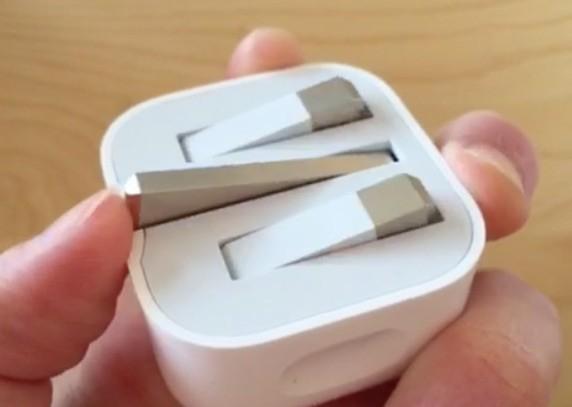 We were treated to a sneak peek of the power adapter a little over a week ago when former British rugby player Will Carling tweeted a few photos of his new Apple Watch gifted from Apple design chief Jony Ive. Seeing as how Carling’s photos also included a special, never before seen sport band in red, it was unclear if the charger would come with the Apple Watch or when it would see release.