Apple has reportedly advised its AppleCare staff not to assist Mac users in removing malware, while the company conducts an investigation into the “Mac Defender” and “Mac Security” trojans. According to a leaked internal memo, acquired by ZDNet, support staff should only advise Mac owners not to install the malicious apps, and – if they discover that their warning comes too late – direct them to an Apple Support document on malware rather than “make recommendations for specific software to assist.”

The memo also insists that AppleCare staff should neither confirm nor deny that the malware has been installed, should not attempt to assist customers in removing it, and should not escalate cases to Tier 2 support. Neither should they be referred to the Apple Store, which “does not provide any additional support for malware.”

Apple is yet to comment on the leak, though it certainly looks like the company is attempting to tread water while it investigates the malware. Despite growing popularity of OS X, the platform is still in the minority when it comes to the attentions of virus and other malware authors. That privileged position may well have left the company wrong-footed today. 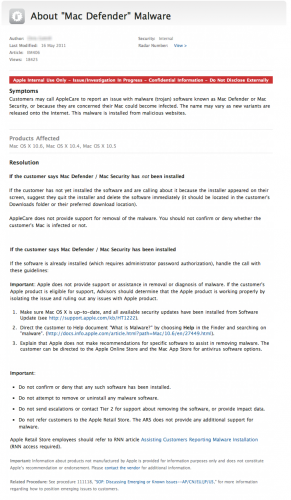