Apple Store back up: iPad mini and goodies galore

With the Apple iPac mini event over with, it’s time for the Apple Store to return to the web in full force, here with the tinier iPad, a new MacBook Pro, a new Mac mini, and a whole heck of a lot more. This update to the store brings with it not just a wave of new products, but a set of product retirements, this leading to a rush on the Refurbished and Clearance section – be sure to check the iPad 3 (now retired, believe it or not) for a big thrill ($375!) Then there’s the MacBook Pro with 13-inch Retina display at $1699, the iMac refresh with much-much thinner body for $1299, and the Mac mini for $599.

There’s a new USB power adapter in the Apple Store that works with the iPhone 5, iPhone 4S, iPod touch 5th gen and iPod nano 7th gen as well as all the iPads. This charger is 12w instead of the until-now 10w, this allowing you to charge faster then ever before – or so we’re to understand. We’ll have to see once we’ve got our hands on a unit in the very near future. 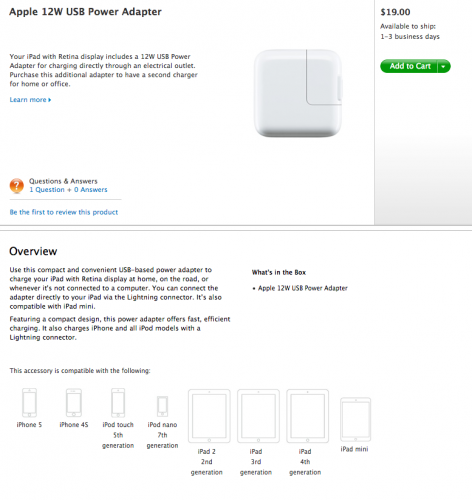 Note that this marks a rather silent retirement of the iPad 3, as marked above. You’ll find the iPad 2 continuing to sit in stock in Apple Stores around the world while the iPad 4th generation device replaces it. This will have Apple’s stock quite obviously showing the iPad 2 as the lesser device across the board, even compared to the iPad mini – with prices that may make the iPad mini and the iPad 4th gen irresistible.

Have a peek at the rest of our Apple event coverage in our giant Apple iPad mini event round-up and stick around the Apple store portal for more information as it arrives. This update to the Apple store and the Apple ecosystem has a whole miniature vibe to it, wouldn’t you say? We’ll see how it all adds up with more in-person hands-on action soon!