When OS X Yosemite was rolling out, Apple unleashed a public beta program to ease interested consumers into the new-look desktop OS. Via mobile, the aesthetic changes were made long ago in iOS 7, but features are coming at a rapid clip. To that, Apple is also seeding a public beta program for iOS today, starting with iOS 8.3. Still rolling out (read: if you visit the link below and it doesn’t show up, don’t worry), the beta gives just about anyone an early peek into what’s next.

Rather than just sign up and get the new OS, you’ll have to jump through some cursory security steps before you get access. Apple is forcing users to back up their phone via iTunes first. Then, anyone who wants into the beta testing fun must download a configuration profile from the AppleSeed website to allow the beta. 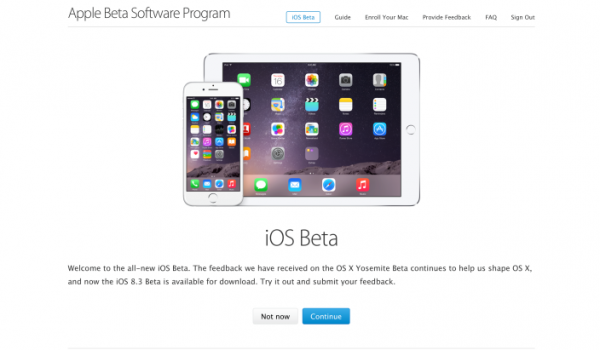 As we’ve warned you in the past, backing up your data before entering into a beta program is the wisest thing to do. When you get in there, lots of weird (and wonderful) things can happen. Expect cool new features, but know it’s a work in progress. Things like battery life will likely suffer in this beta program.

If you’re interested, checkout the link below. You might expect updates to happen quickly, too. Apple just seeded a third iOS 8.3 Developer’s build.