Apple will turn the iPhone into a smart home hub at WWDC 2014 in early June, insiders claim, revealing a “big play” to make iOS the heart of home automation. One of the technologies announced at the annual Worldwide Developer Conference, which kicks off on June 2nd, will aim to make setting up and using a smart home system more straightforward, it’s said, potentially using a new Apple TV as the core.

Apple won’t be trying to make every component for the smart home, sources tell the Financial Times, instead looking to certify third-party devices that are set up to integrate well with its new platform.

The intended system would apparently work in a similar manner to the “Made for iPhone” branding, distinguishing which remote-control switches, wireless light bulbs, and other devices had been approved. Apple is said to be considering putting certified hardware through extra security checks, too, to pre-empt concerns that connected homes could be more vulnerable to hackers.

It will also ensure that compatible products are cautious with user data. Last week, suggestions that Google could put personalized adverts on devices like smart thermostats, appliances, and wearables prompted an uproar among privacy advocates. 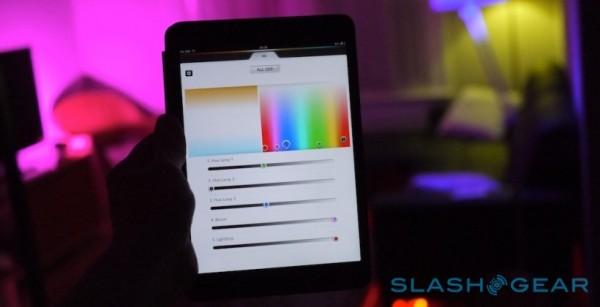 Apple is expected to use technologies like iBeacon to help with precise positioning of users within the home, just as it can do in its stores. However, there’s also renewed chatter of NFC being included, potentially being added in the iPhone 6.

That might allow lights and other devices to power on and off automatically, whenever users are around. Known as geofencing, it’s something several different manufacturers offer, though integration into iOS 8 could make it easier to control.

Exactly which partners have signed up for certification are unclear, though Apple already stocks several options on its store shelves alongside its own products. The company has previous had an exclusive on retail sales of Philips’ hue bulbs, for instance, while Nest thermostats continue to be offered in Apple Stores, despite the company being acquired by Google.

The smart home space is a naive one, and while home automation technologies have been around for decades, we’re still yet to see any one company step in and become the de facto standard. Instead, there have been attempts to glue different third-party devices together, such as from Revolv and SmartThings, though it’s still very much a niche segment.

Exactly how far Apple might want to take the hardware side of the smart home is unclear. Certifying the components provided by other companies and merely creating a software center as part of iOS 8 would be a relatively straightforward approach, though there’s also speculation that it could be looking to bake some of the functionality into a new Apple TV for release later in 2014.