The “smoking gun” email the Department of Justice has cited as evidence of Apple’s conspiracy with publishers to artificially hike ebook pricing was, in fact, only an unsent draft by Steve Jobs, the Cupertino firm’s legal team has revealed. The DoJ had highlighted the email, from Jobs to SVP Eddy Cue, as a sign that Apple would pressure publishers to force Amazon into shifting to the so-called agency model of ebook pricing, which would result in more expensive downloads and, consequently, more money for the iBookstore. However, Apple revealed that the actual email Jobs sent to Cue was far less dramatic.

In the version of the email the DoJ submitted, Jobs specifically points to Amazon’s pricing as a cause of concern. Referring to the wholesale iBooks prices Cue suggests, the Apple CEO writes “I can live with this, as long as they move Amazon to the agent model too for new releases for the first year.”

“If they don’t, I’m not sure we can be competitive…” Jobs concludes in the DoJ’s version.

However, in the version of the email which Apple’s legal team says was actually sent to Cue, the CEO’s theorizing on pricing is considerably more nuanced. “I can live with this,” Jobs writes, “as long as they also agree to the other thing you told me you can get.” Although it goes without clarification in the message, it’s possible that that’s a reference to publishers petitioning Amazon to shift to the agency model, though given it’s not explicit it undermines the DoJ’s argument somewhat. 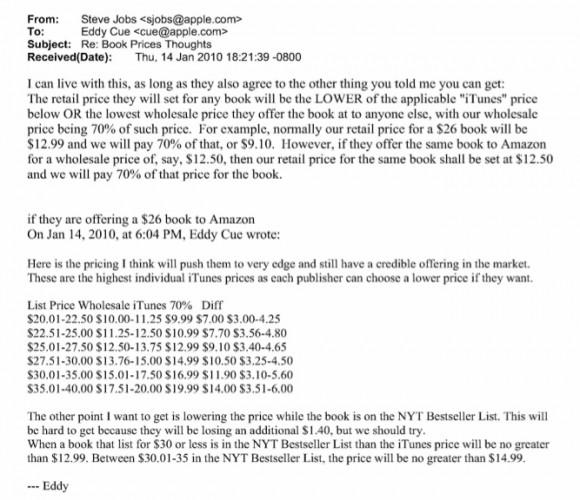 The focus on Apple getting a strong deal no matter what other retailers have negotiated ties into the so-called most-favored nation (MFN) agreement, which Apple attorney Orin Snyder highlighted in his opening statement at the case earlier this month. Then, Snyder pointed out, Apple would not have needed the MFN agreement with publishers if it had already known the details of their deals with other retailers like Amazon.

Snyder’s argument has been that the DoJ has taken Jobs’ emails out of context and that, while the government prefers to portray Apple and publishers as colluding, in fact iBooks deals were “contentious and hard-fought.” Rather than what actually happened, he suggested, “what the government wants to do is reverse engineer a conspiracy from a market effect.”

The new version of the email will be discussed in court today.