Apple responds to allegations from the European Commission which suggested that the company was receiving illegal tax breaks from Ireland. In this letter, penned by Apple CEO Tim Cook, the company suggests that the EU is retroactively applying rules which should not apply to their taxation situation. Apple has their European base of operations in Ireland, having set that base up back in October of 1980, and has expanded throughout Ireland (and greater Europe) since. The European Commission suggests that Apple’s way of paying taxes in Ireland is “illegal under EU state aid rules.”

The UK’s vote on exiting the European Union is done, but the actual exit wont take place fully for several years. Northern Ireland is indeed part of the UK, but Apple’s base is in Southern Ireland, which is not part of the UK.

As such, the part of Ireland which is under scrutiny right this minute would not be affected by the UK leaving the EU directly. HOWEVER, there has been some chatter from folks like “investment guru” Andrew Amoils who suggests VIA Express that it’s possible that Ireland could leave the EU “within five years”. 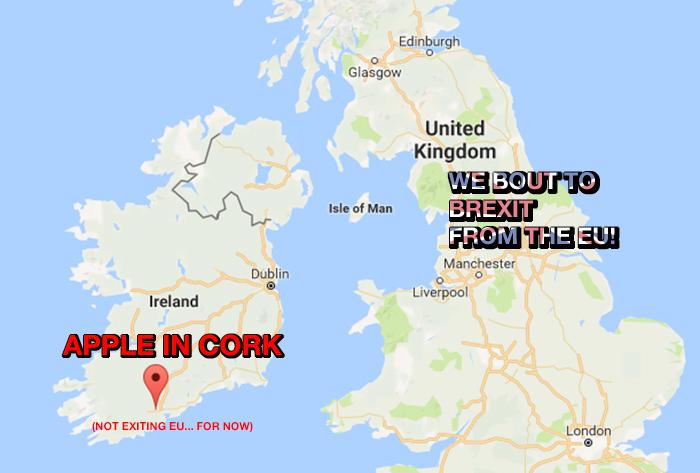 If Southern Ireland did indeed leave the EU, the charges the European Commission is making now would only (potentially) affect Apple retroactively. Future tax laws from the EU, obviously, would no longer affect Ireland as such.

What the European Commission Said

“Member States cannot give tax benefits to selected companies – this is illegal under EU state aid rules,” said Commissioner Margrethe Vestager, in charge of competition policy. “The Commission’s investigation concluded that Ireland granted illegal tax benefits to Apple, which enabled it to pay substantially less tax than other businesses over many years. In fact, this selective treatment allowed Apple to pay an effective corporate tax rate of 1 per cent on its European profits in 2003 down to 0.005 per cent in 2014.”

“Apple set up their sales operations in Europe in such a way that customers were contractually buying products from Apple Sales International in Ireland rather than from the shops that physically sold the products to customers. In this way Apple recorded all sales, and the profits stemming from these sales, directly in Ireland.”

Learn more about these allegations in our article from earlier today.

The full allegations from the European Commission can be found in a PDF file accessible through Scribd. The Europa.EU website is where these allegations were originally published.

What Apple Said in Response

“At its root, the Commission’s case is not about how much Apple pays in taxes. It is about which government collects the money,” said Cook.

“Taxes for multinational companies are complex, yet a fundamental principle is recognized around the world: A company’s profits should be taxed in the country where the value is created. Apple, Ireland and the United States all agree on this principle.”

“In Apple’s case, nearly all of our research and development takes place in California, so the vast majority of our profits are taxed in the United States. European companies doing business in the U.S. are taxed according to the same principle. But the Commission is now calling to retroactively change those rules.” 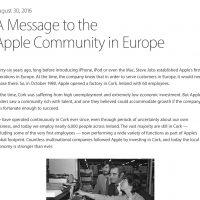 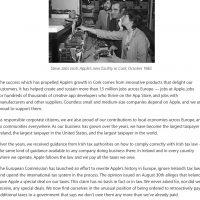 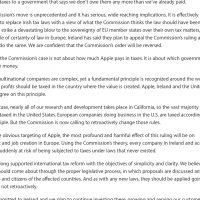 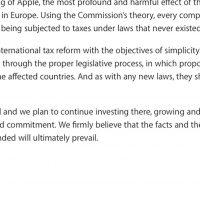 Apple’s letter to the public can be found in its entirety in screenshots immediately above this paragraph.