OS X Mountain Lion has been out for less than a year, and already we’re seeing the third update come around. This time, we’re seeing improvements and bugfixes to Boot Camp, which now supports Windows 8, and the Mac App Store also added support for gift card redemption via webcam, which is a feature that was recently introduced with iTunes 11.

Along with support for Windows 8, Boot Camp also added support for Macs with 3TB hard drives, a feature that is long overdue considering the storage needs of a lot of users. The 10.8.3 update also comes with several bugfixes including patches for Logic Pro and a fix for a bug that sometimes made audio stutter on some iMacs. 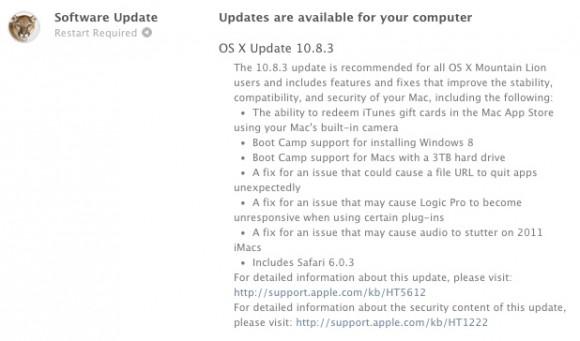 Overall, OS X 10.8.3 spent three-and-a-half months in beta, with 13 different beta version being released over that timeframe. That’s a long time for such a small OS update, but this isn’t anything new from Apple. They’ve been known to release several beta versions of updates before seeding it out to the public.

Hopefully todays update doesn’t cause any problems. In the past, several different OS X updates have wreaked havoc on particular Mac machines, so if you’re weary about updating this time around, then it won’t hurt to wait it off for a few weeks to find out if it’s causing any problems. Otherwise, the update should be ready for you, either in Software Update, or through the Mac App Store.