Apple has been bulk-granted 51 new patents, Patently Apple reports, and one of them is a computer with an extreme-angle projector built-in. The patent describes a “desk-free” computer wirelessly connected to all peripherals and using any available vertical surface as a display screen. The computer would, alas, require some presumably non-desk surface to sit on, dashing the hopes of gravity-defying computer aficionados everywhere.

The patent proposes that the only wire in the computer could be the power cord for the console itself. All other aspects would be wireless. Keyboard, mouse, router — all would stand alone and communicate with the computer via the occult sorcery of Wi-Fi, Bluetooth or some other form of near field communication (NFC). More interestingly, inductive wireless charging for these peripherals would be incorporated, although since the patent’s 2010 filing Apple has focused more on magnetic resonance charging for its wireless power R&D.

The extreme-angle projector in the patent is of standout interest. It would work in any number of configurations, for example when placed up close and personal to a wall. Patently Apple suggests a 15-inch distance could still be far enough away to project a 40-inch display. The projector would run on an “advanced optical engine” to make the angle adjustments for projecting a light-emitting diode (LED)-based display. 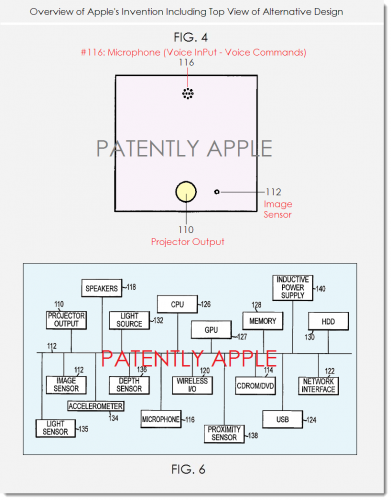 The site further suggests that the microphone-equipped computer could serve as the long-mythologized update to the Apple TV product. In conjunction with Siri and body-reading technology created by Apple’s recently acquired experts at PrimeSense, the desk-free computer could become the living room system for the next generation.