Apple have filed a patent for a system for inserting media into an ongoing phonecall, which if implemented would mean that iPhone owners could share music, video, image, voicemail, podcasts or other files with each other.  The application, titled “Methods and systems for mixing media with communications”, suggests that today’s mobile devices fall short of offering straightforward real-time sharing of media files, pointing out that users would likely have to end their conversation and email an audio file (or other media file) as an attachment.

Once shared, the media file could be controlled – ideal for those “listen to this bit, you’ll love it” moments – and the conversation could be continued while the media plays.  Alternatively Apple tips future video calling capabilities for the iPhone, with the system allowing for two concurrent video streams: one for the conversation, and one for shared video footage.

Another possibility is the introduction of an invitation system, whereby one user could invite another to join them in watching a video – such as a YouTube clip – or listen to a specific audio file.  Users who have had files shared with them would be able to control them from their own handset for as long as the share continues, skipping through their friend’s library.

Of course, as with all patents there’s no telling whether this will make it into a commercial product (0r even be granted), but it certainly seems to fit with Apple’s media ethos.  We can definitely envisage the “Like that shared track?  Buy it now on iTunes!” button that might pop up at the end of a media-sharing conversation. 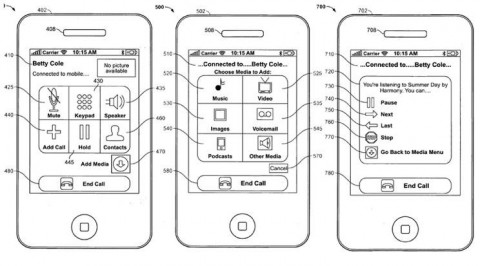