There’s unquestionably an advantage to being the home team, and in Apple Music‘s case that means coming preloaded on future iPhones while rivals like Spotify are stuck in the App Store. Apple’s new streaming platform comes relatively late to the game – though, with Beats Music already under the Cupertino umbrella, it’s been at least a stepparent to a streaming service for some time now – and, while that’s allowed Tidal, Spotify, and others to grab the earlier adopters, it’s also given Apple’s team a chance to identify what some of the potential shortcomings in the current market. Turns out, a big part of that comes down to real, actual people rather than just algorithms. While it won’t be until the end of June until Apple Music starts accepting new listeners, I got a preview at WWDC following the launch.

Start Apple Music for the first time, and you’re faced with a ball pond of musical genres from which you’re to choose your favorites. They help shape the first tab in the UI, “For You”, after which point the music you play, playlists you create (complete with custom artwork, if you want), and which tracks you save as favorites. 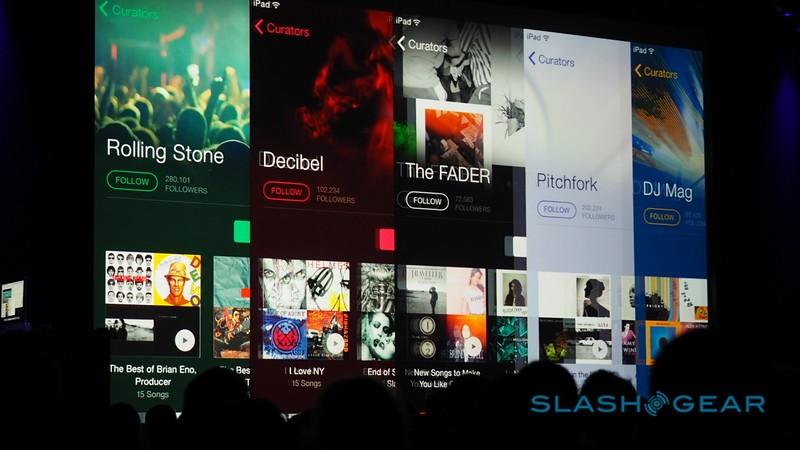 Apple is leaning hard on the idea of human curation rather than an AI being left to juggle tracks, however. In fact, there are various different types of human interaction: in the “For You” tab, for instance, playlists follow the lines of “Inspired by…” or “Bring the Big Rock” and are curated by in-house experts. “Bring the Big Rock,” for instance, is the handiwork of “Apple Rock” who, despite the generic name, is an actual person who works at the company.

Those Apple Music Editors will be responsible for hundreds of playlists in each category of music, organized by activities like BBQing and Commuting. The latest playlist will appear at the top of the list, and if you follow a genre you’ll also get a notification added to your Connect timeline about any new content.

Then there are “Curators” who are experts but outside of Apple. Exactly who that list will include is still unconfirmed, but expect names in the manner of music site Pitchfork. 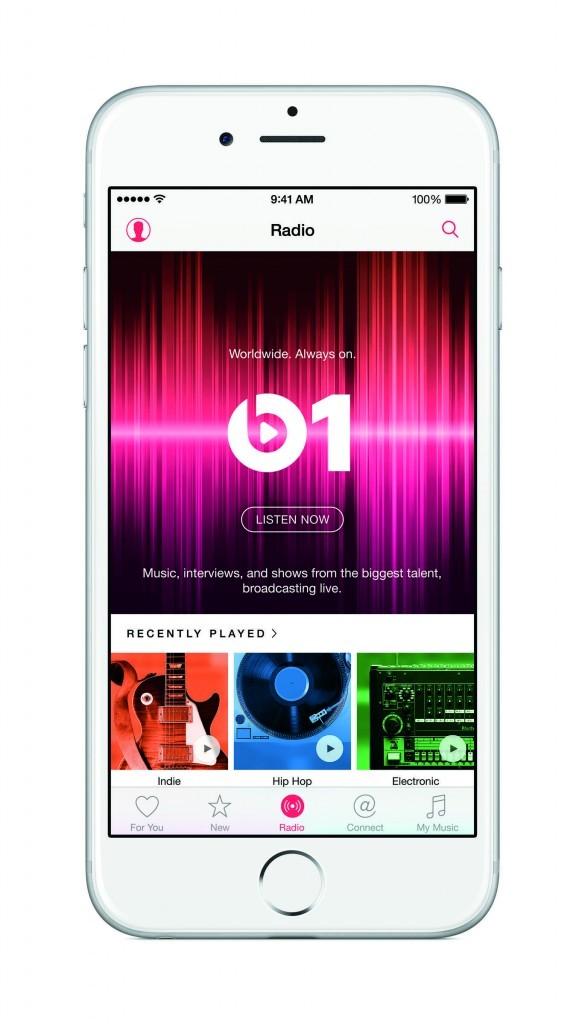 The Radio tab is where Apple’s flagship station, Beats 1, lives. Live, 24/7, and across more than 100 countries around the world, it’ll be run by DJs including Zane Lowe in Los Angeles, Ebro Darden in New York, and Julie Adenuga in London. Contrary to the new breed of on-demand stations, Beats 1 is a return to the traditional days of radio: everybody hearing the same thing, at the same time.

Currently, Beats 1 is playing a prerecorded clip of Zane Lowe, and eventual programming is yet to be confirmed. Also unclear at this point is how Apple will signpost upcoming content on Beats 1: right now, there’s no schedule of shows, so catching your favorite genre, track, or an interview with your artist of choice is a matter of luck.

I’d be surprised if Apple didn’t add some sort of alerts system eventually, perhaps tied into your choice of artists included in your Connect timeline.

There are other Featured Stations within the Radio tab, basically iTunes Radio stations. Quite a lot of Apple Music is recognizably pulled from earlier audio offerings from the company, in fact; from an artist or track, for instance, you can start a radio station or create a Genius Playlist.

Connect, the next tab along, is one of those things the success of which hinges on how eagerly artists embrace it. In effect it’s a mini mailing list, through which they can share anything from a thought-of-the-day status update, through photos, audio clips, and videos. 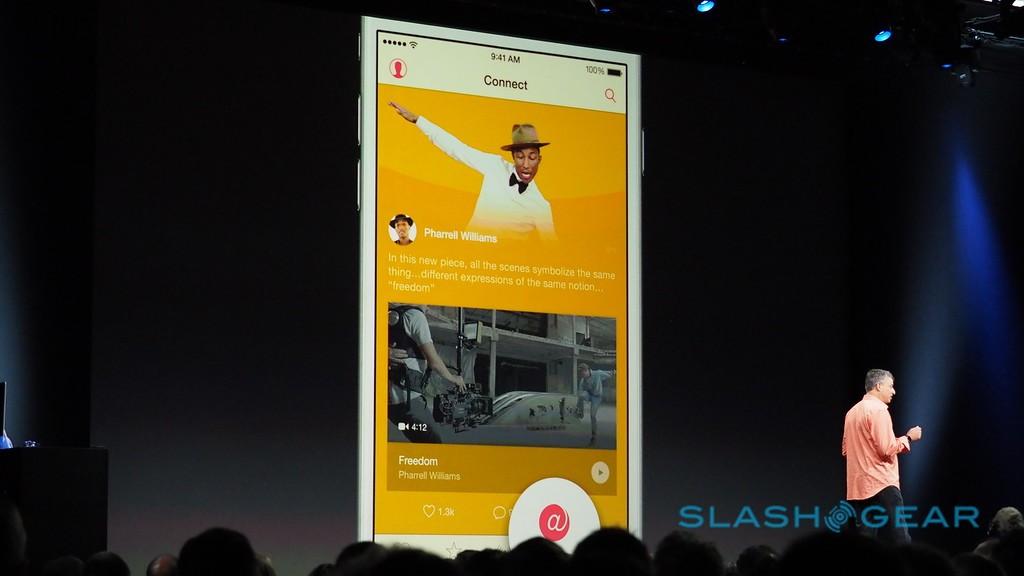 Artists themselves will need to be verified by Apple before they can claim a Connect page. Once that’s done, they’ll get an extra “Post Status” button in the Apple Play app, along with the option to also share across other social networks like Facebook and Instagram. What it doesn’t do is the reverse: Apple is clearly positioning Connect as the home for artist updates, rather than just another spoke in their outreach strategy.

Musicians, albums, tracks, and status updates can be hearted, commented on, or shared – the latter bringing up the usual iOS share sheet – though it’s a little unclear at first what your feedback is doing. Heart a track, for instance, and the algorithm will use that to better shape its future suggestions; however, it doesn’t add that track to the “My Music” section. If you want to do that, you have to hit the three-pip button and choose the option from there. 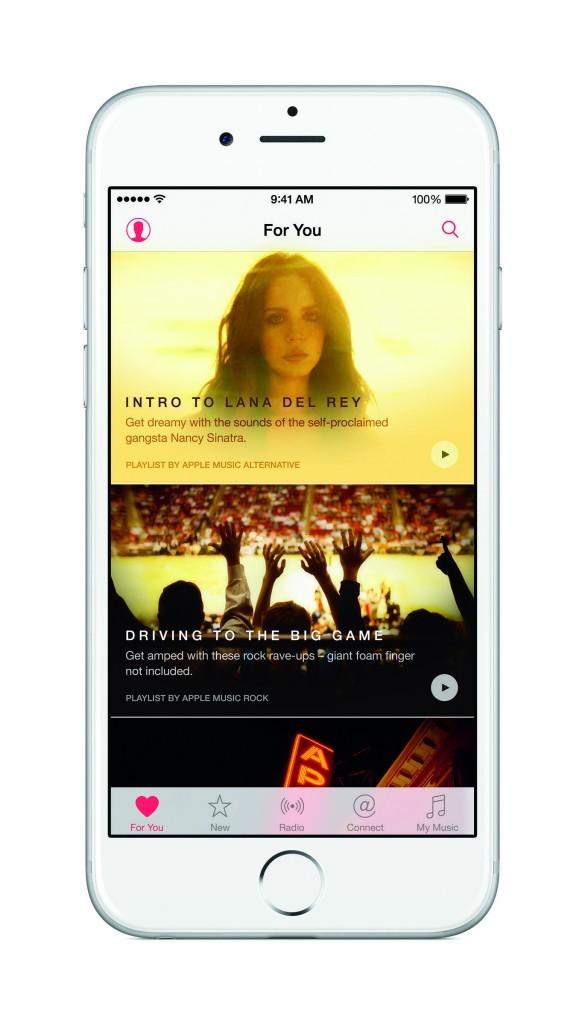 As for sharing content, what the recipient will be able to do with that depends not only on whether they have Apple Music themselves, but also if it was a status produced by Apple or the artist.

Say, for instance, you want to share an album with a friend via email. They’ll get a link which, if they have Apple Music installed, will automatically open that album in the app. If they don’t have it, they’ll get a preview webpage – though not a playable version of the audio, not even the 30-second snippet iTunes offers before you buy – and a link to download Apple Music.

If, though, you share a Connect update shared by a musician themselves – a behind-the-scenes photo of a setlist, perhaps – then that will apparently be visible, since it’s the artist’s content not Apple’s. While I can understand the distinction from a licensing point of view, I can also see it being a little confusing to users at first.

The final tab is My Music, and of all Apple’s varied attempts at music services and apps before, it’s probably the best I’ve seen in terms of straightforward usability. Here, purchased music local to the phone, saved tracks streaming from Apple Music, and offline tracks from Apple Music all co-mingle in a single list, with an overarching search to help navigate through them.

Offline playback is one of the most useful features of Spotify and other streaming music services, particularly if your commute takes you out of cellular coverage. Right now, you can flag a track for offline use by hitting the “Make available offline” button; tracks are thus available in perpetuity, as long as you have an active subscription.

Unfortunately, you can only have offline playback on a single device, though currently you can have five devices connected to a single-user Apple Music account. 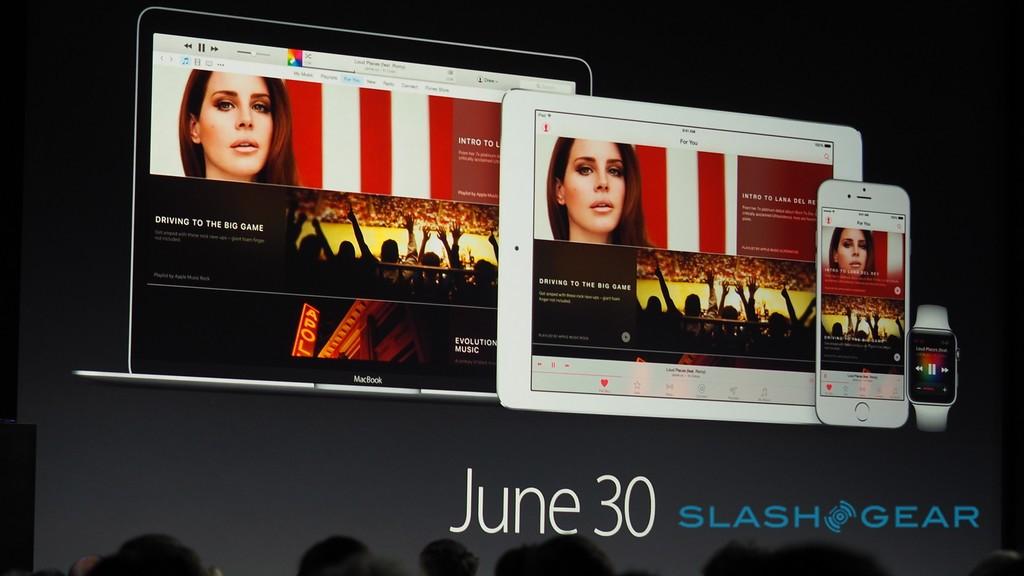 There are still more than a few questions lingering overall. Apple isn’t saying exactly how many songs will be available – only that it’s “millions” – and nor will it say just what sort of overlap with the tracks in the iTunes catalog available to download there is. Supposedly most of the catalog is in there, but it’s an evolving thing and – just as Netflix sometimes gains content but loses other movies – will change over time.

Apple isn’t talking about what partnerships, if any, there might be in the works. One of the reasons I like Spotify, for instance, is that it integrates so tightly with Sonos, but it’s unclear at this point whether that will be the case for Apple Music. You’ll get Bluetooth streaming, and versions for Windows and – eventually – Android, but they’re the only certainties right now.

Update: Apple Music will be at 256 kbps. In comparison, Beats Music uses a 320 kbps bitrate, as does Spotify, while Tidal offers a high-bitrate option. 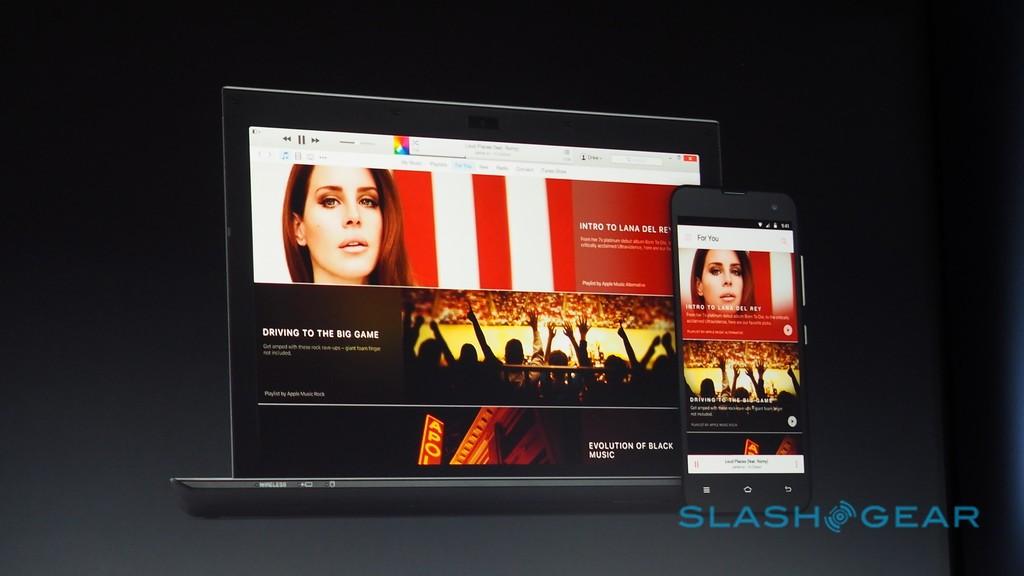 Apple Music feels familiar, which is probably a good thing. Much of it feels educated and shaped by previous Apple experiments: iTunes Radio, Genius, iTunes Match, even the little-loved Ping. While there’s something to be said about the joy of venturing out and discovering new music, there’s also a lot to be said for simply knowing where to go to find a reliable and entertaining soundtrack to your day.

With its competitive pricing – $9.99 for an individual user, or $14.99 for up to six connected through the same iCloud Family Account – and its privileged position on iOS devices, Apple Music has some advantages out of the gate. What much of its success will hinge on is the strength of that human curation, and its perceived value to listeners.

If its three month trial is sufficient to convince the ears that having people shaping playlists is delivering better mixes than an algorithm alone might, then rivals will have to raise their own game to compete. Otherwise, Apple is counting on users wanting to plunder the majority of its music catalog for a set monthly fee, and not being bothered to go comparison shopping across alternatives such as Spotify.