Apple have quietly revealed shipping information about Mac OS X Snow Leopard, with the UK listing for the software refresh indicating a “by August 28th” shipping date.  Meanwhile several US preorder customers have apparently received emails informing them that their version should ship by the same date.

Unfortunately there’s no way to actually order OS X Snow Leopard from the UK store, and the US Apple Store is still listing the upgrade as coming “in September”.  It’s listed as £7.95 and $10.75 (including tax) respectively.

Of course, Apple are offering free shipping, so it’s possible that they’re picking a particularly slow carrier to make sure the DVD drops into your post box on September 1st and no earlier.  In the absence of an official date, all we have is speculation – then again, speculation is what makes all this such fun. 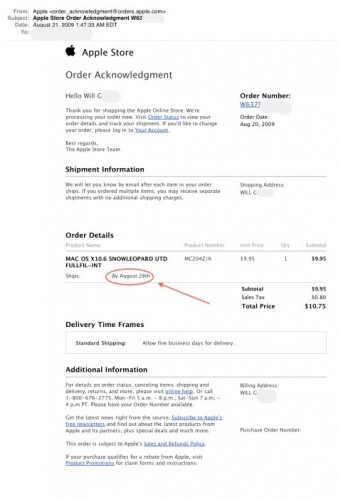 [via TUAW and via Engadget]