Apple is Safe with Tim Cook

Wednesday afternoon Apple’s long-time CEO and founder Steve Jobs sent a letter out to the company’s Board of Directors and the greater Apple Community announcing his resignation as CEO of Apple. His letter requests and the board has agreed that now former Chief Operating Officer Tim Cook would become the new Apple CEO while Jobs himself would become Chairman of the Board, director, and, as he put it, “Apple employee.” As we find confidence in the fact that Jobs will continue to be a large member of the Apple family, we of course look to Tim Cook to fill the role that Jobs has defined for several decades. Is Tim Cook up to the task?

Tim Cook is a name you really should recognize. He’s already served as interim CEO for Apple several times, each of them while Jobs took health-related leaves. These periods of Cook as Apple CEO took place in 2004, in the first half of 2009, and since Jobs took a leave of absence this past January, a period where Cook has handled day-to-day CEO duties daily. Jobs’ letter of resignation referred to a succession plan that included Cook already laid out well before today came around. As a former VP for Corporate Materials at Compaq, Chief Operating Officer of the computer reseller division of Intelligent Electronics, and having spent 12 years as director of North American Fulfillment at IBM, Cook would have been a qualified candidate for a high position in the business even before you consider his exemplary service with Apple since 1998.

During his years with Apple he rose from senior vice president of operations to his current position of COO starting in 2005. His several accolades include reinventing Apple’s approach to inventory supply chains, managing perfectly timed releases of new products, and keeping in-demand products in stock, each of these puzzle pieces essential to the current success of Apple. In fact, his contributions to the success of Apple can literally be counted in dollars and cents during his 2009 stint as acting CEO as Apple’s stock rose 67 percent according to CNN’s profile of Cook.

As a 2009 profile of Tim Cook with Wired notes, Michael Janes, the first general manager of Apple’s online store gives one look at Cook as the guy who turns all the fabulous designs Apple is set to release into “a big pile of cash for the company.” The profile goes on to note:

In some ways, Cook and Jobs are poles apart. Cook is the yin to Jobs’ yang. A quiet, soft-spoken, low-key executive, he couldn’t be more different from Jobs’ sarcastic, fearsome, larger-than-life personality. But that’s exactly what makes him perfect for the job, say people who have worked with Cook. 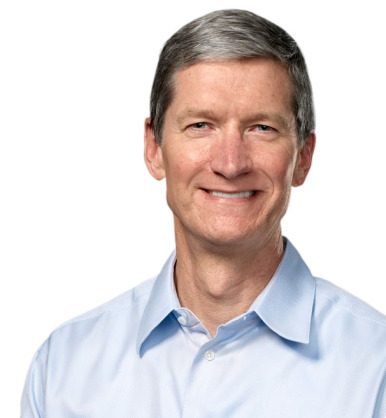 On the other hand, a profile of Cook from Fortune calls him a much less feeling sort of fellow – and that’s a good thing:

Tim cook arrived at Apple in 1998 from Compaq Computer. He was a 16-year computer-industry veteran – he’d worked for IBM (IBM, Fortune 500) for 12 of those years – with a mandate to clean up the atrocious state of Apple’s manufacturing, distribution, and supply apparatus. One day back then, he convened a meeting with his team, and the discussion turned to a particular problem in Asia.

“This is really bad,” Cook told the group. “Someone should be in China driving this.” Thirty minutes into that meeting Cook looked at Sabih Khan, a key operations executive, and abruptly asked, without a trace of emotion, “Why are you still here?”

Khan, who remains one of Cook’s top lieutenants to this day, immediately stood up, drove to San Francisco International Airport, and, without a change of clothes, booked a flight to China with no return date, according to people familiar with the episode. The story is vintage Cook: demanding and unemotional.

As Lex Friedman notes in the Macworld profile of Cook, the known Apple share holder puts down on paper the thoughts many people in such a position had in early 2011 when the article was written and what we’re sure many people are feeling now:

Should Steve Jobs by choice or necessity ever need a full-time replacement at Apple, it will of course be the board’s decision to decide who should fill his black turtleneck. But with Tim Cook taking over now for the third time in seven years—and his consistent track record when called upon thus far—one might expect that Apple’s future is already in safe hands.

As I noted back in February, Apple’s legacy and future is safe, doubly so now that Jobs is confirmed to still be a part of the company and Cook is at the helm.

Also note that you can read the official press release on this event in the post Steve Jobs Resigns as CEO of Apple from earlier today.