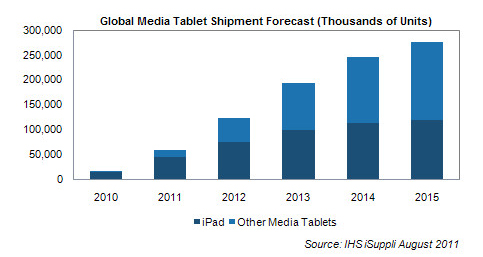 “All the momentum in the media tablet market is with Apple right now. The competition can’t seem to field a product with the right combination of hardware, marketing, applications and content to match up with the iPad. Furthermore, Apple’s patent litigation is serving to slow or complicate competitors’ entry into some key regional markets. With Apple lapping its competitors, many of whom are still struggling to get out of the starting gate, this remains a one-horse race.”

The report comes amidst concerns for Apple’s future as the company’s iconic CEO Steve Jobs has resigned yesterday evening. New Apple CEO Tim Cook, who has been with the company for 13 years and has contributed to much of the company’s success as COO had released his first company-wide email addressing Jobs’ resignation and to assure employees that nothing is going to change. It will be interesting times ahead to see if competitors may be able to take advantage of this transition to make some gains in the tablet market.