It appears that in addition do their Motion-Sensitive keyboard patent, Apple has sent out a patent application for a “Flat Keyless Keyboard for Desktops & More.” This application was signed for late last week and may be entirely flat or may include at least one input surface which may be constructed of glass, metal, plastic, or any other solid material Apple might end up wanting to use. In the case of glass, the keys could be painted on the surface or shown beneath the surface of the glass on a display, not unlike on-screen keyboards working on smartphones and tablets today.

There may be haptic feedback included in the ultimate product of this patent, that being force or vibration in response to each key tap, thusly helping the user work with the keyboard in a similar manner to how their classic keyboard reacts to their touch. Instead of using mechanical switches or buttons, this sort of design uses one or more sensors to detect where the user is tapping on the given area. One possibility here is that one or more piezo-electric sensors would be used to detect and record and acoustic pulse created when the user taps the keyboard in a given place.

In the case of combinations like capitalization of letters, Apple describes the combination of piezo-electric sensors and capacitive sensors. With this combination, it may be possible to distinguish between an accidental touch of the keyboard surface and a deliberate one. For lighting, proximity sensors may be positioned in the board to work with one or more photosensors located along the edge of the board. Corresponding infrared- LEDs will be oriented to make a grid on the keyboard in a way that the photosensors receive the light projected by the LEDs. Wild!

Can you see our current line of mechanical keyboards becoming a thing of the past in the next five or so years? We certainly can. Using an on-screen keyboard for an extended period will let you know – it can get quick! 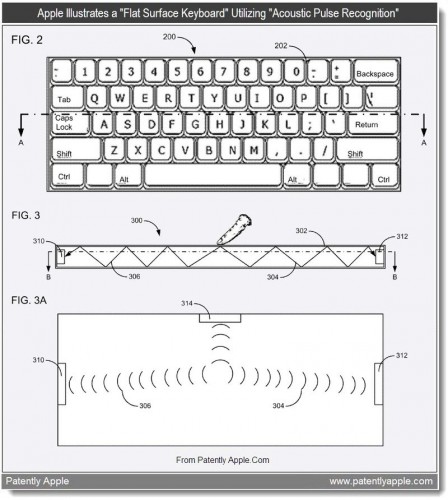