There’s a new subscription service from Apple called Apple Fitness+ that’s centered on the Apple Watch. This service utilizes the sensors and the display powers of the Apple Watch, iPhone, iPad, and Apple TV to deliver an all-encompassing health and fitness service. It’ll be available soon in the USA, UK, New Zealand, Ireland, Canada, and Australia.

The new Apple Fitness system works with Apple Watch to track yoga, cycling, dance, and treadmill walking and running. It’ll track strength, core, HIT, rowing, and “mindful cooldowns.” Apple Fitness+ works with a beginner program and organizes workouts by duration and type – there’ll be 10 different workout types at the start of the program.

Users will find new workouts added to the Apple Fitness+ system every week, and there’ll be “intelligent suggestions” in potential workout routines for subscribers. This system is integrated with Apple Music and delivers “onscreen metrics” via Apple TV.

If you’re planning on buying an Apple Watch, you’ll get three “free” months of Apple Fitness+. Otherwise Apple Fitness+ will cost $9.99 per month of $79.99 per year. This price will include the Family system, too. 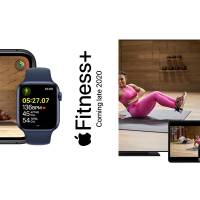 It’s not immediately clear if this system will require users to have more than just an Apple Watch to deliver the most basic version of the Apple Fitness+ experience. Check back and we’ll update when we find out!

UPDATE: At launch, Apple suggests that customers will be able to find Fitness+ in a the tab “located in the new Fitness app” on iPhone. So you’ll need at LEAST an Apple Watch and an iPhone. There’ll also be a Fitness+ app for iPad and Apple TV in the near future.

UPDATE 2: Fitness+ is also included in the new Apple One Permier plan. That’s another subscription service from Apple that gives access to a bunch of Apple services and 2TB of iCloud storage. That’ll cost a cool $29.95 per month for Apple Music, Apple TV+, Apple Arcade, and Apple News+.