One of the coolest things about 3D printing is that the devices have allowed individual users to build their own gadget accessories. Before the era of 3D printing, building your own charging stand for an iPhone 12 and an Apple Watch would’ve been almost impossible. With the arrival of 3D printers, anyone with a printer and some time can create just about anything they can dream up.

The user, DonSonsi, posted details of the product on Reddit and Thingiverse. DonSonsi wrote that three versions of the device have been created so far, including a “default” device, one without the Apple logo, and one with a 1.1 millimeter deeper watch base to support watches with cases or covers on them. The stand is designed to support the inductive Magsafe charging adapter for the iPhone 12 line of smartphones and the inductive charging adapter for the Apple Watch.

The base’s design allows the cable routing to be guided underneath the stand either to the left or the right side. The stand was printed using an Anycubic All-metal mega 3D printer. The resolution was 0.16, with a 15 percent infill. It was printed using a standard filament made of PETG in a color called storm gray.

The designer thinks the design would hold up if printed using PLA. Print settings were 40mm/s using a 0.16 layer height, 0.4 line with, and using three outer walls. The custom printed charger seems to be a hit with people on Reddit, with many asking the builder to print them one. It would seem Apple will likely take issue with him printing their logo on his custom device, particularly if he starts to sell them. 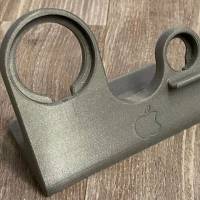 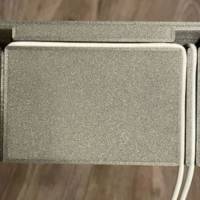 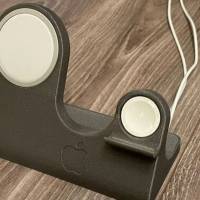 The designer could likely avoid that by not printing with the Apple logo. It’s unclear how much he might charge for printing one for anyone interested.