Apple dominates the sky according to WiFi provider Gogo

Apple‘s iPhone and iPad reign supremacy above the clouds when it comes to in-flight internet access according to a new infographic being detailed today. The popular in-flight WiFi company Gogo has just released some detailed information regarding what devices are most preferred, at least while in the air. With smartphones and tablets taking in nearly 67% of all devices read on for the full breakdown.

The last time you were on a flight how many Android tablets did you see compared to the iPad or iPad mini? Whether you’re a fan or not Apple still reigns supremacy in this regard. According to the number of devices connecting to Gogo’s services, the iPad is the device of choice above all others for in-flight entertainment.

Overall tablets take up 35% of all connected devices with laptops coming in at 33%. Then smartphones come in a very close 3rd and will soon pass laptops, currently sitting at 32% of all in-flight connected devices. Then the folks from Gogo break this down even further to reveal how far ahead in the sky Apple is over the competition. 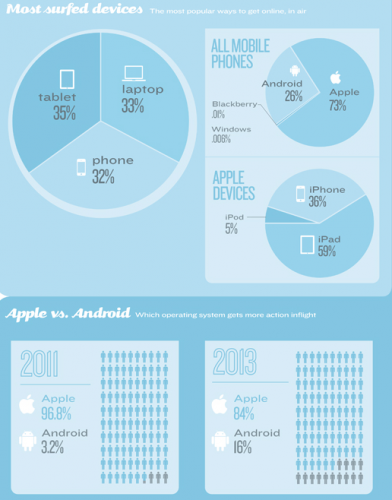 In 2013 out of all mobile devices being used to connect through Gogo, 84% are running Apple’s iOS while only a small 16% are being powered by Google’s Android OS. If you single it down to smartphones the iPhone holds 73% of all users, while Android sits around 26%. Oh, and we can’t forget about BlackBerry and Windows Phone. The two combined only make up around 1% and aren’t even in the infographic. While this shows great numbers for Apple, in 2011 Android was only being used in 3.2% so they are certainly on the rise.

So when you’re 36,000 feet in the air what are you doing? Aside from checking destination weather or entertainment options, Gogo states most are just doing general web browsing. Mobile has certainly taken over the traditional laptop when it comes to travel WiFi needs, and Apple’s iOS is at the top of that list.