Whether a free Bumper is enough to salve your iPhone 4 concerns is one question; a more pertinent one, perhaps, is when this free Bumper will arrive.  According to forum members over at MacRumors, Apple is beginning to send out refund emails to those who bought their Bumper through the online Apple Store.  The refunds include any shipping fees and taxes that may have been applied, and will be made straight to the credit card originally used.

Meanwhile the company has promised a similar refund scheme for those who picked up a Bumper in-store, though the nature of that refund process is yet to be announced.  However those who picked a third-party case won’t be seeing any money back, though Apple has said it will be including some third-party models among the free options offered to new buyers between now and September 30th. 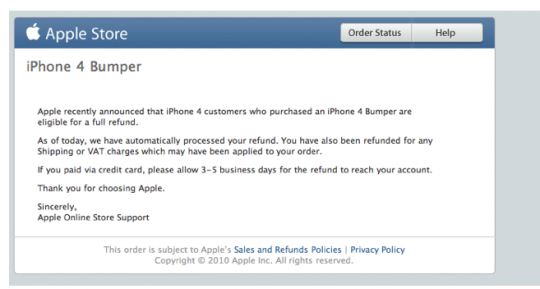