From the butt of jokes to wireless trendsetter, Apple’s AirPods are serious business now. The true wireless earbud market is a huge deal in accessories, and all eyes were on late 2021’s AirPods (3rd generation) launch to see just what Apple could do for the midrange. With a $179 price tag, these new AirPods draw a line in the sand for features and usability, though at the same time Apple may also be a victim of its own success.

It’s tricky to remember the early days of AirPods, where Apple’s earbuds were roundly lambasted for their design and price. Five years on, the wireless earbud segment is vast, and Apple’s own range has expanded with AirPods Pro at the high-end. 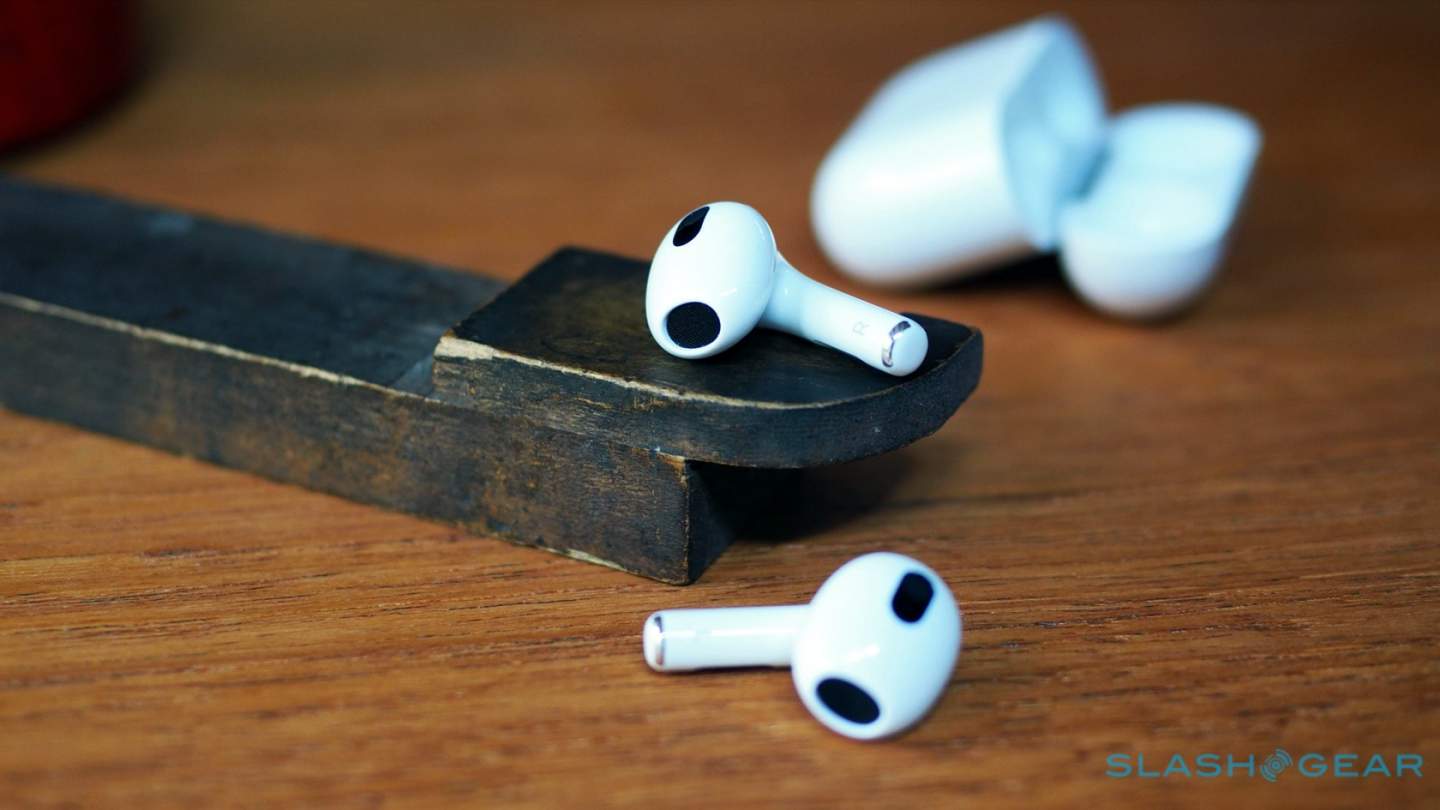 The arrival of the third-gen AirPods doesn’t mean saying goodbye to the old design, either. The second-gen AirPods are sticking around, as Apple’s budget option, priced at $129. You miss out on wireless charging, spatial audio, active noise cancellation, and sweat & water resistance, but otherwise their 5 hours of battery life is still competitive.

Striking a balance in-between those, then, sees Apple make some big decisions with 2021’s AirPods, and it’s not quite a clean sweep. 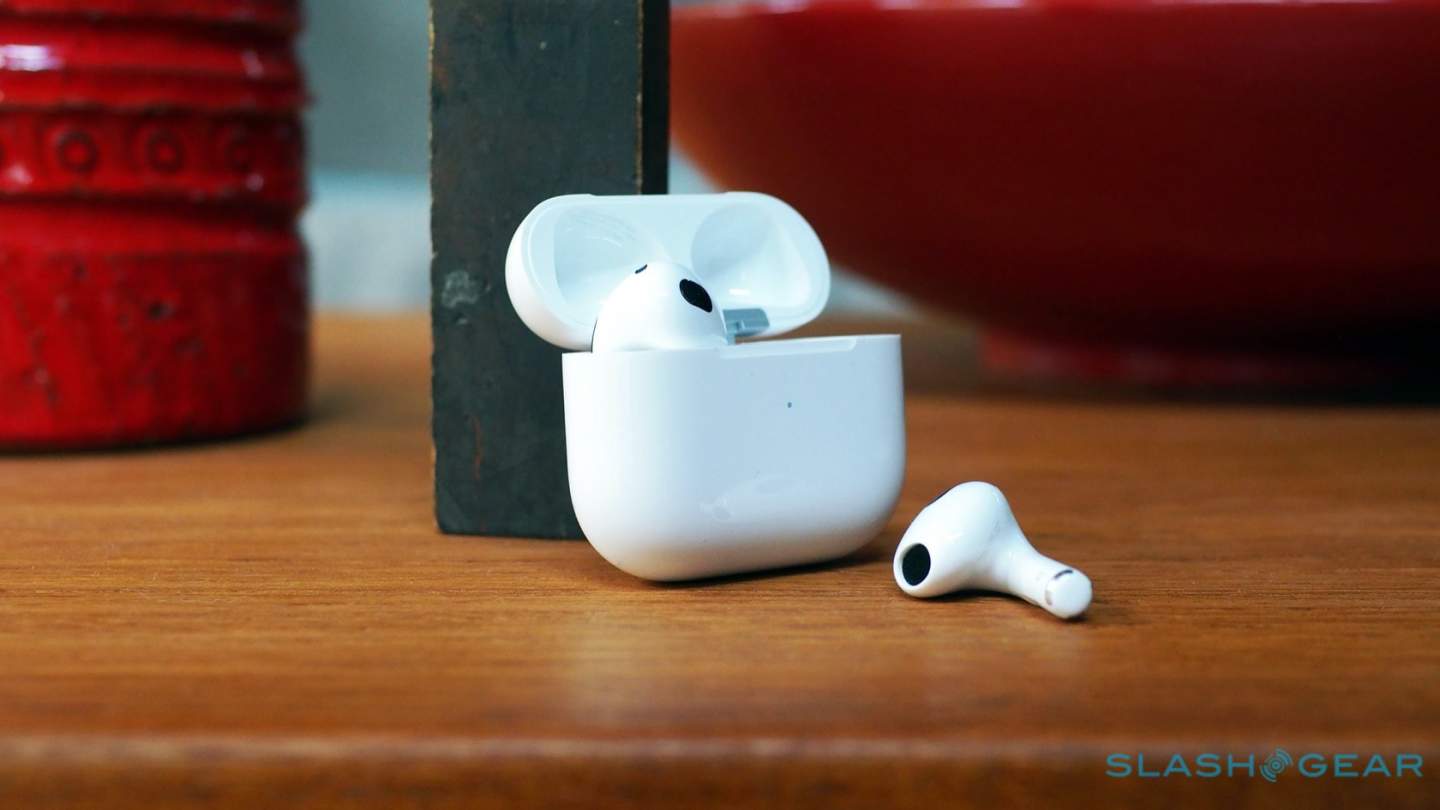 The design feels like Apple hit pause while morphing between the old AirPods and AirPods Pro. Shorter stems and bigger buds, but no silicone in-ear tips; instead, these new AirPods are intended to perch in your ears. How well that works will come down to the shape of said-ears.

As I’ve said before, I have fussy ears when it comes to earbud fit. AirPods Pro, for example, stayed lodged in place with their molded eartips, but I still found myself going back to second-gen AirPods for reasons of comfort. I can walk and – if I’m careful – trot through an airport without the AirPods bouncing out of my ears, but any movements more dramatic are a no-go. Still, for calls and music while I’m sitting or walking, they’re great. 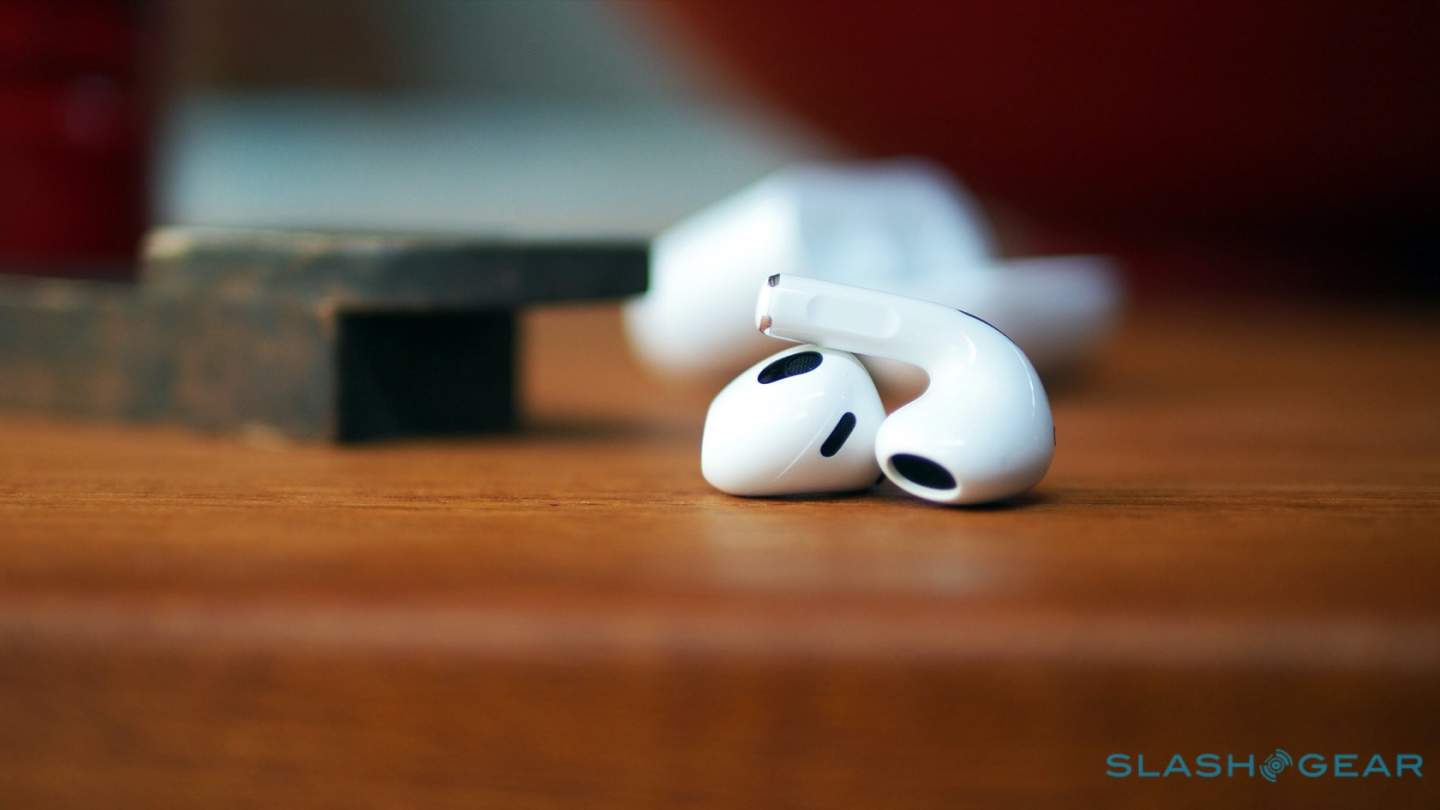 These 3rd generation AirPods aren’t quite so successful, for me at least. The bigger bud doesn’t slot quite so snuggly into the contours of my ear, and the squeezable touch-controls on the stem take some care to avoid knocking the whole thing out altogether. Should that happen, at least your music will pause: Apple’s new in-ear sensors promise to be better at tracking whether they’re in contact with actual skin, rather than just a desk or pocket.

If you do drop them in a puddle, AirPods are now at least IPX4 water resistant. And – though the absence of an in-ear tip does mean you hear plenty of ambient noise, and those nearby can often hear what you’re listening to – once I’d got the AirPods balanced I could wear them for extended periods without having that “blocked ear” feeling that rivals suffer. The reality is that earbud fit is hugely subjective, and you may need to audition a few models to find what’s right for you. 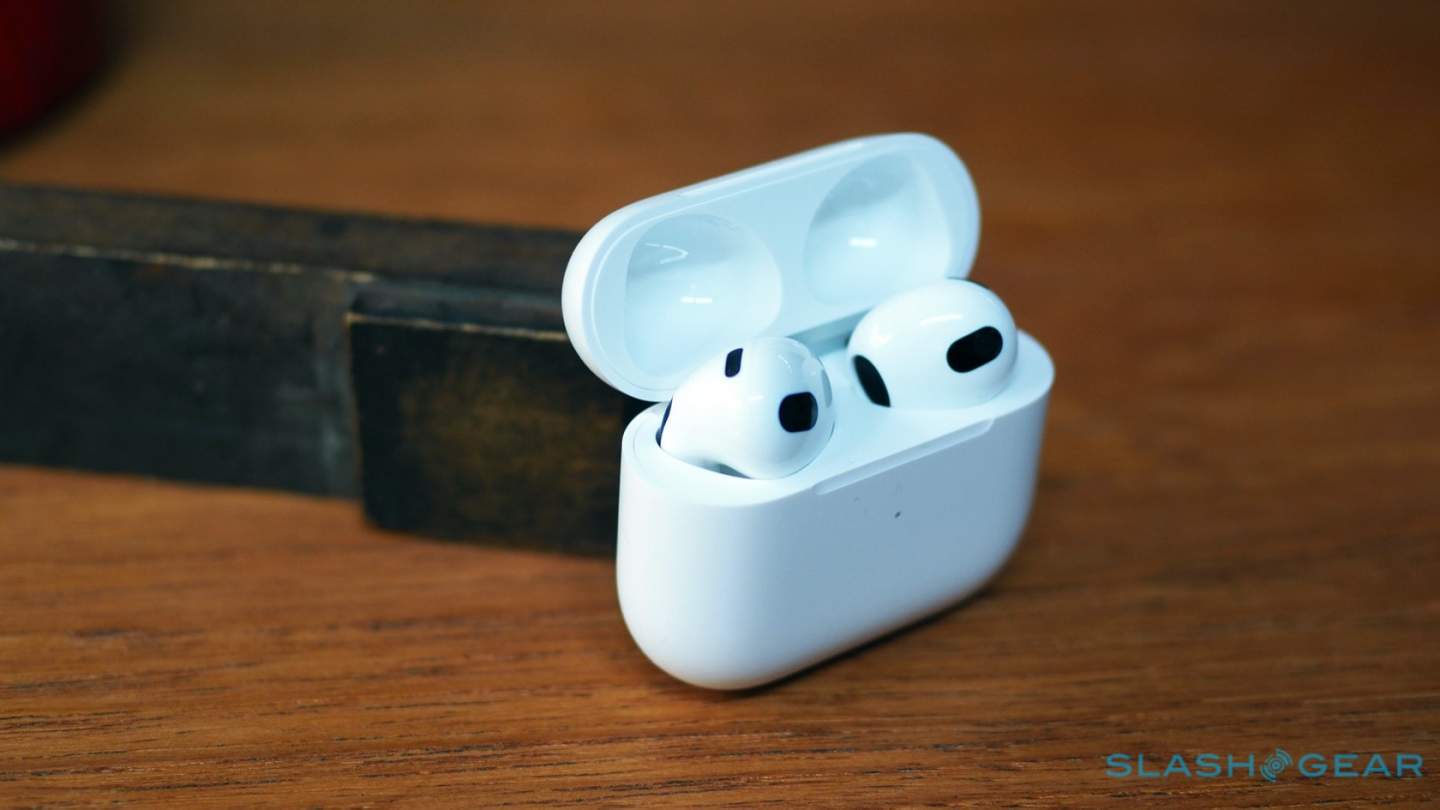 There’s no active noise cancellation – for that you need AirPods Pro – though you do get support for spatial audio and tracks encoded in Dolby Atmos. Currently your best bet for finding those is an Apple Music subscription, though they’re still in the minority in the catalog. They do sound impressively immersive, the soundstage shifting around you as you move your head, but I’m not sure it’s a full selling point for me, yet.

Happily, general audio performance has improved over the previous AirPods. A new driver and custom amplifier, along with Adaptive EQ – which tunes audio depending on how it’s resonating in your ear – altogether sound fuller and more encompassing than the second-gen earbuds. If you really want more bass you’ll need to go to a sealed design, but Apple has still managed to achieve an impressive degree of balance nonetheless. I particularly like how Apple’s tuning encompasses a wide range of musical styles: everything I listened to sounded decent. 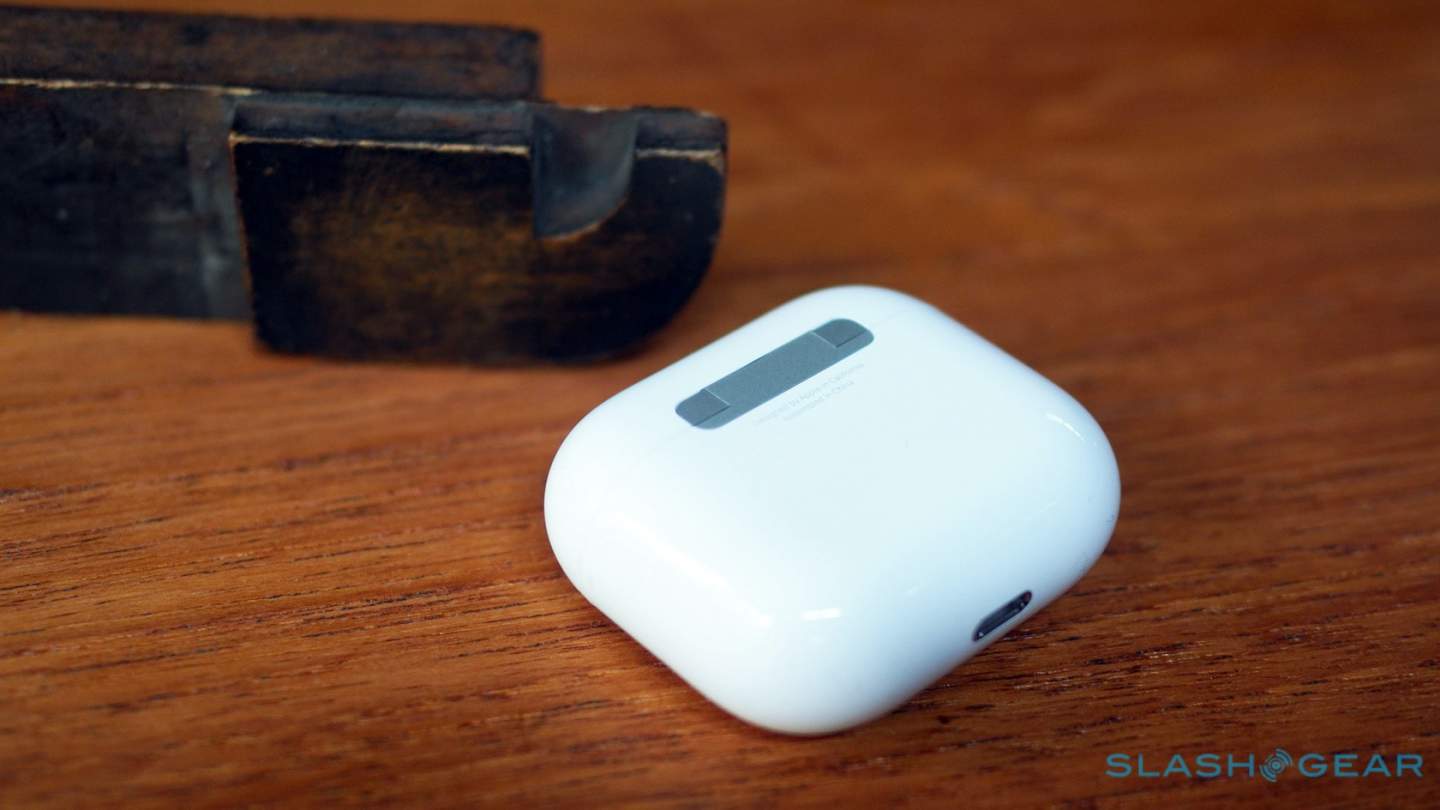 As for battery life, there Apple quotes up to six hours of playback from the AirPods themselves, and 30 hours in total with recharges from the case. The latter can be topped up via Lightning or a Qi wireless charger such as Apple’s own MagSafe. It’s a little bigger – and opens horizontally, not vertically – than the old AirPods case, but smaller than the AirPods Pro case.

Once you’ve mastered pinching the force sensor in the stem, you’ll find a single squeeze toggles play/pause, a double or triple squeeze skips forward or back, and pressing and holding summons Siri. Or, you can use “Hey Siri” for that, and ask for volume adjustments, track requests, and more. It’s worth noting that Siri has (limited) offline support too, so even in Airplane Mode you can control the basics like play/pause and volume. 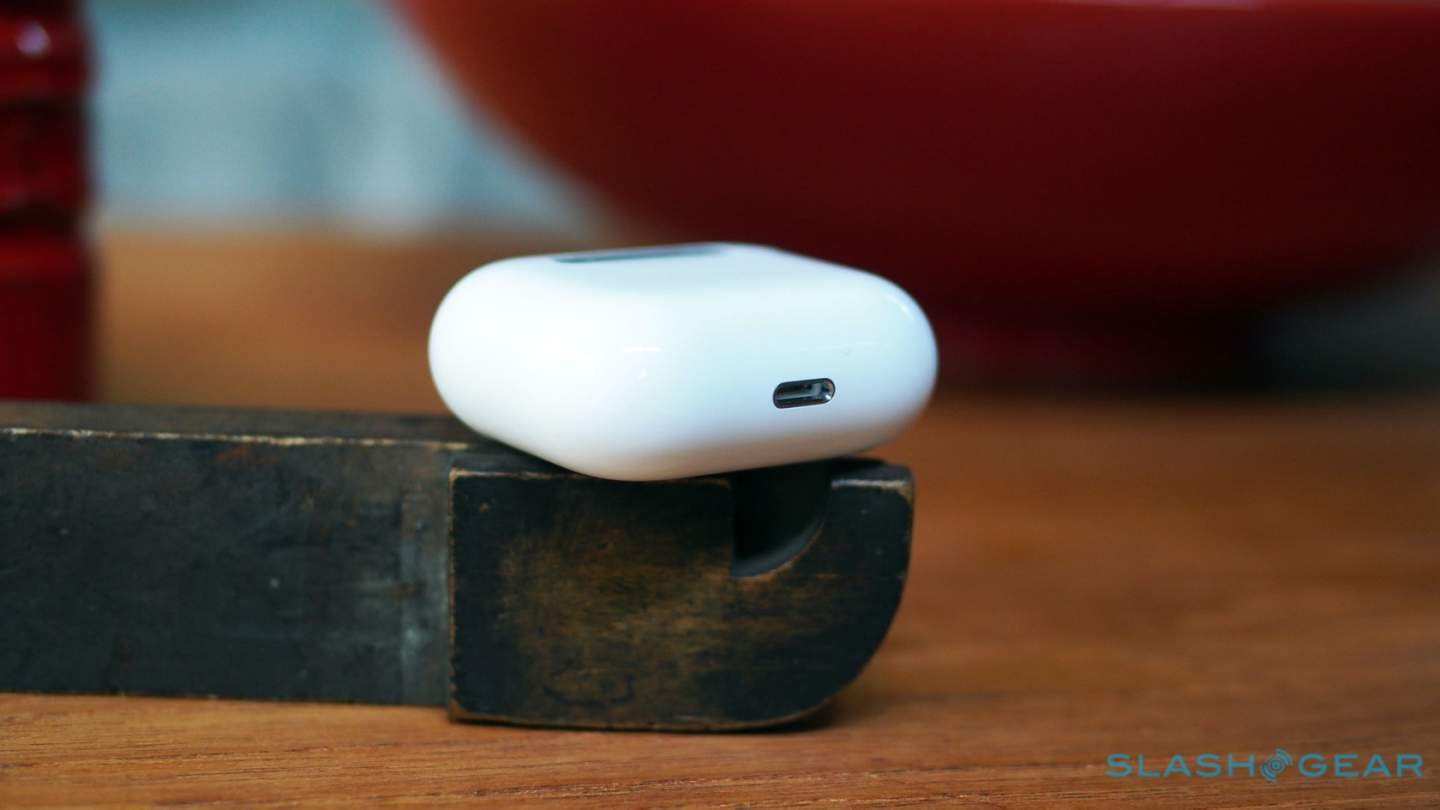 Ironically, Apple’s biggest threat is coming from inside the house – or, at least, from down the hall. The new Beats Fit Pro, which I reviewed just the other day, tap Apple’s own H1 chipset, combine it with active noise cancellation and water-resistance, and have the same tight iPhone integration with “Hey Siri” and Find My support as AirPods do. They also play nicely with Android devices, though, and the wingtip design is far, far more comfortable in my ears. You pay a little more, at $199.99, and miss out on wireless case charging, but I know which I’d pick all the same.

Then there are AirPods Pro, officially priced at $249 but often to be found with a street price just $10 or so more than these new AirPods.

Viewed in isolation, there’s a lot to like about Apple’s 3rd generation AirPods. They sound better, are more resilient, last longer, and have more features than their predecessors. Problem is, the wireless earbud market – one which Apple was instrumental in creating – is now fiercely competitive, and I’m not sure these new AirPods quite do enough versus their rivals. 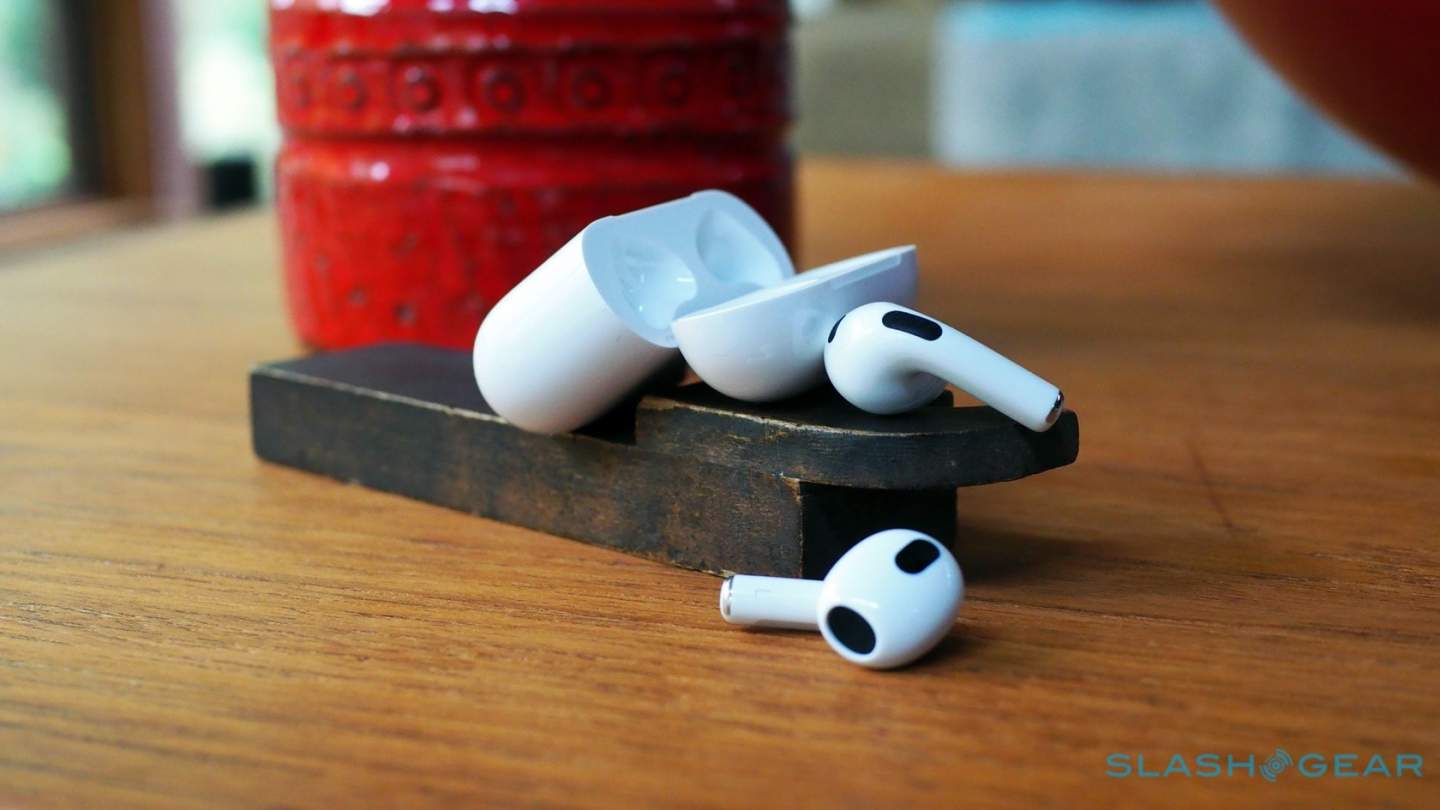 The iPhone-devoted should be cross-shopping with AirPods Pro and Beats Fit Pro. Android fans should have Sony’s WF-1000XM4 on their shortlist; they’re more expensive, yes, but sound better and have great active noise cancellation. And those on a really tight budget might find that the lingering AirPods 2nd generation actually fit better anyway.

The irony here is that Apple can only really blame itself for the high standards of its competition: it set the benchmark, after all. Whereas the middle of the range can often be where you find the most satisfying compromises, though, it’s tough not to compare the new AirPods (3rd generation) with what’s around them and conclude that spending just a little more brings outsized benefits.