The LEGO remote controlled Batmobile is an exercise in beastly looks, battery-powered rumbling motor action, and a new Batman. For some, the new Batman minifig for August of 2018 is enough incentive to own. Even without that Batman – even if this set came with a super old Batman – this set remains a pretty tight box of LEGO bricks and elements.

This machine consists of two sets of wheels, two motors, and a single battery-powered power pack (aka the Powered Up Hub). I would always rather have a self-contained rechargeable battery unit, but if including this AA-packed unit keeps costs down for the end consumer, I’m all for it. But only with the understanding that they already own a bunch of rechargeable AA-batteries and a rechargeable lithium-ion battery charger beforehand. 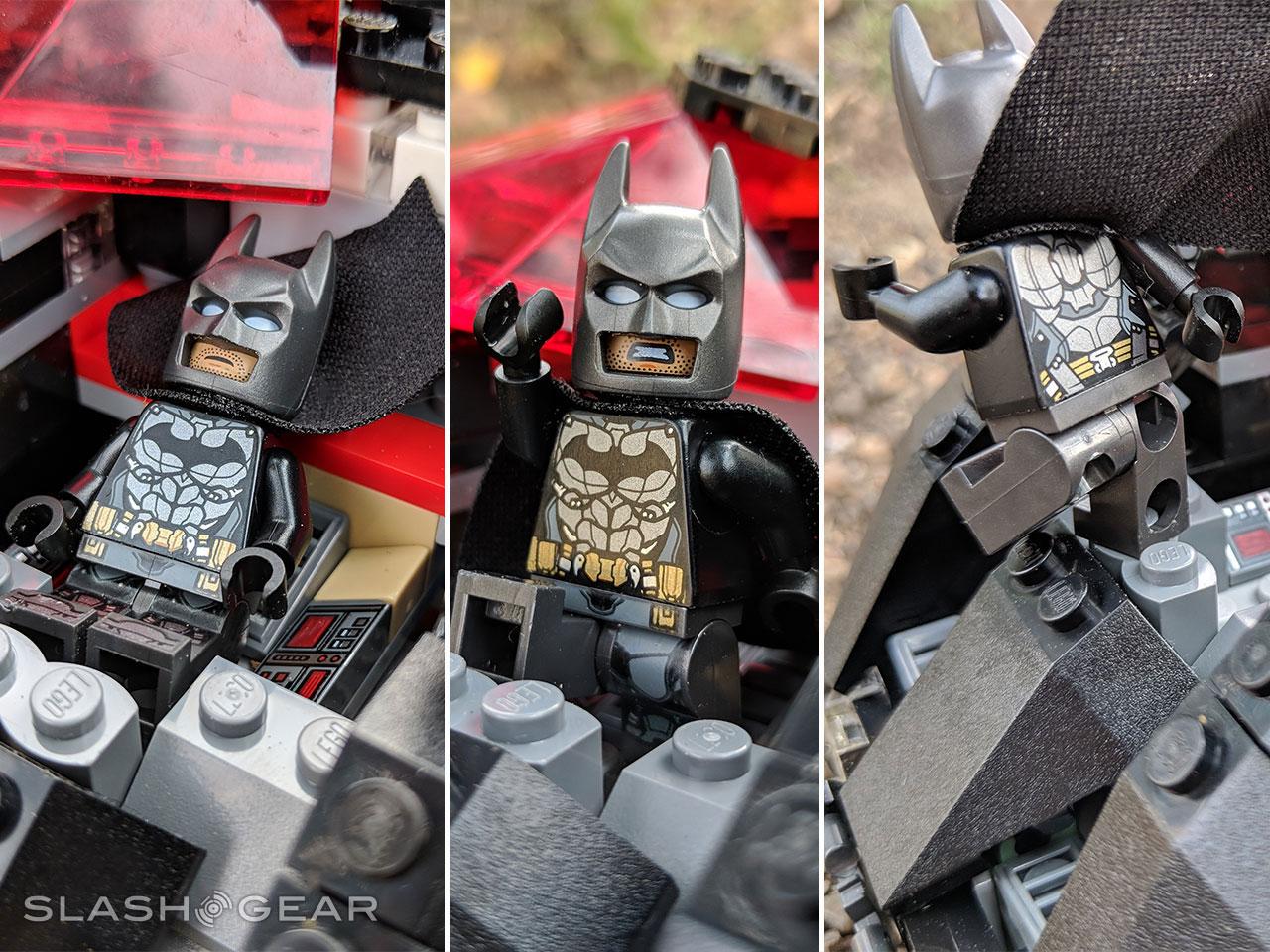 Once the batteries are packed in, the Powered Up Hub fits neatly under and within the back end of the Batmobile. Up top is a couple rows of pegs for attaching the BLACK required by Batman. He only builds with black or very dark gray. Here we’ve also got a bit of red. 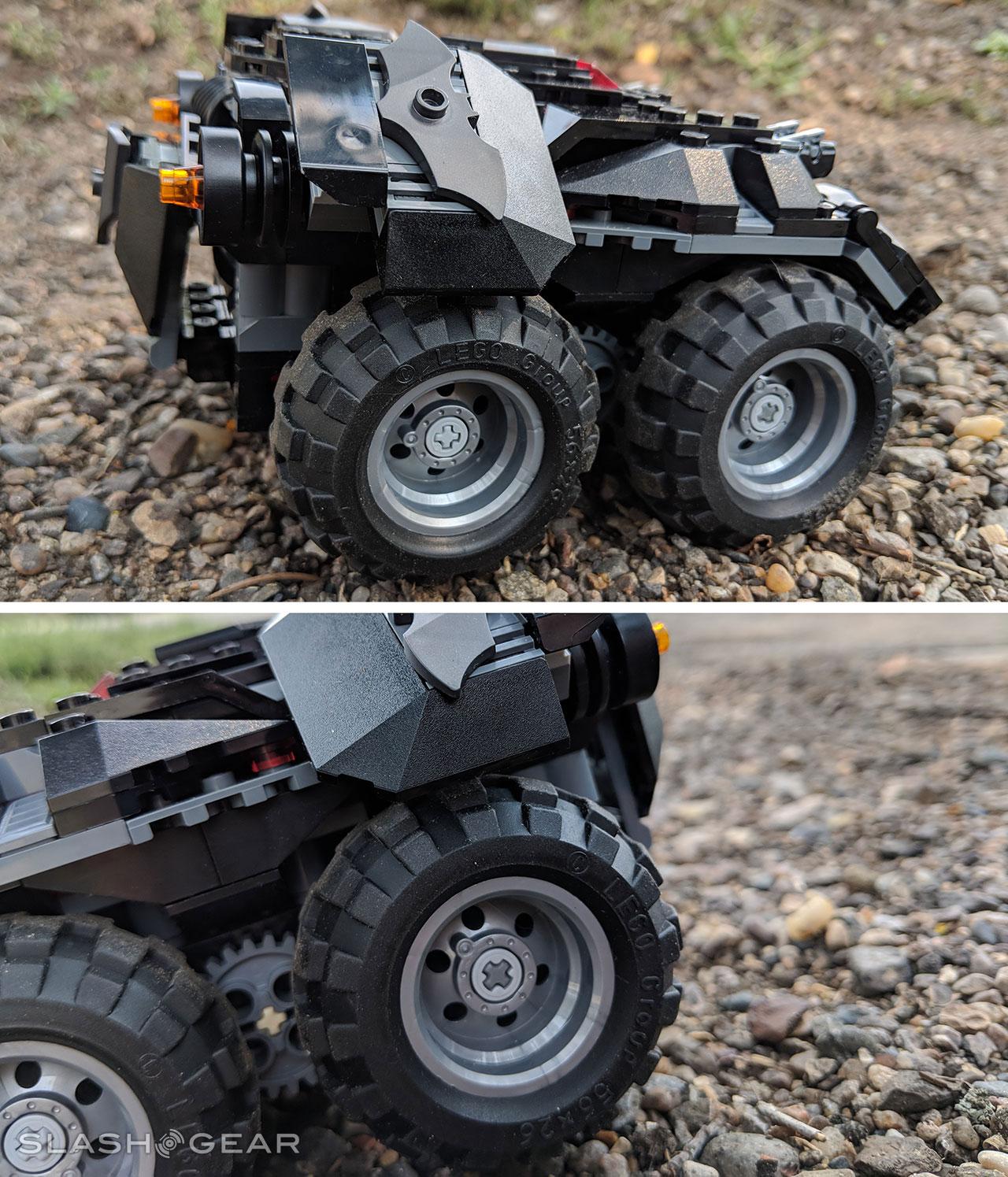 The highlight in red at the top of this Batmobile sits atop the hub, and the battery has a button that’s attached to the highlighted brick. That brick lights up the battery’s LED for two reasons. One, to signal that the battery has power. Two, to set alight the Bluetooth beacon, allowing it to connect to a smartphone or tablet. 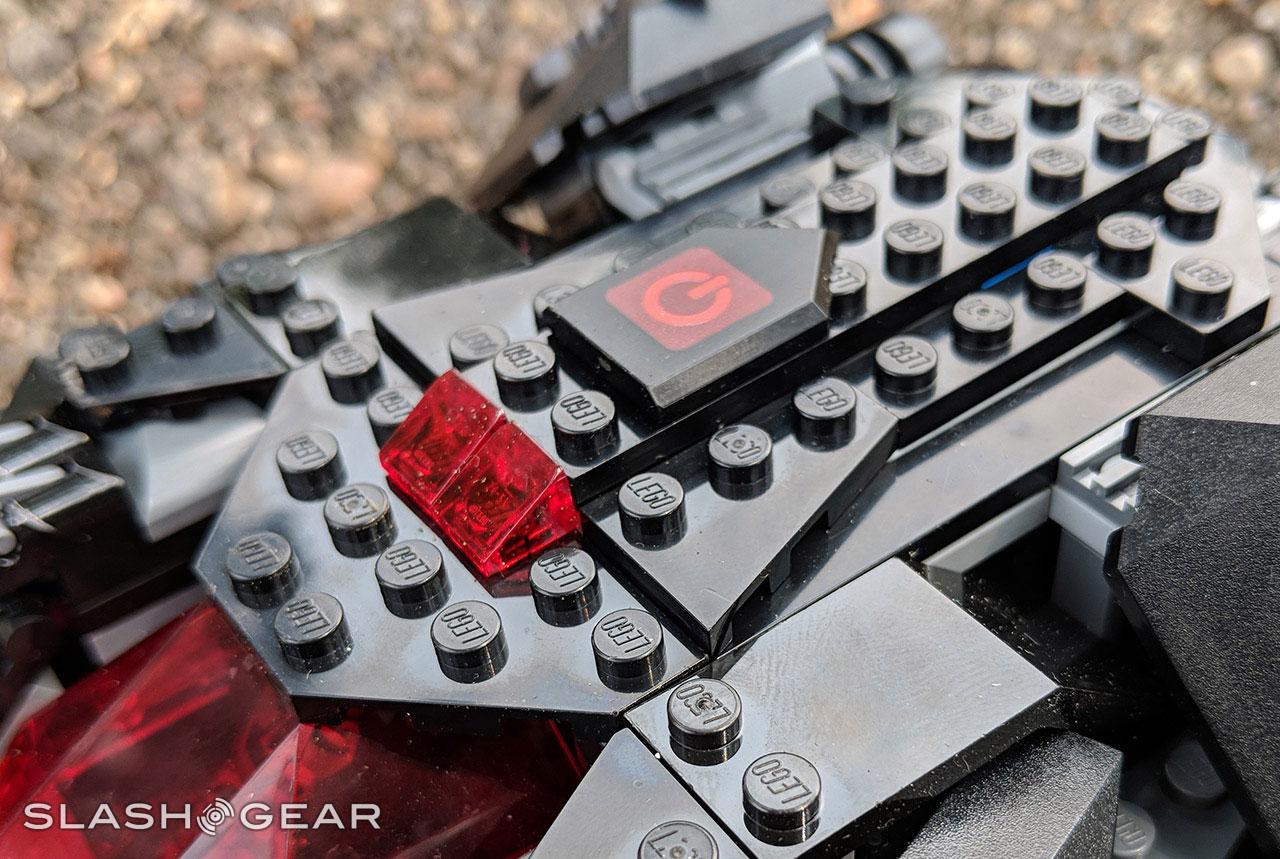 The hub has two ports, one each for the two sets of wheels on the vehicle. Each one of the two motors has two separate axel connections. With these motors, the Batmobile can move forward, backward, left, right, and in circles. One wheel on one side can move backward while the other moves forward, they can both move forward at the same time, and so forth. 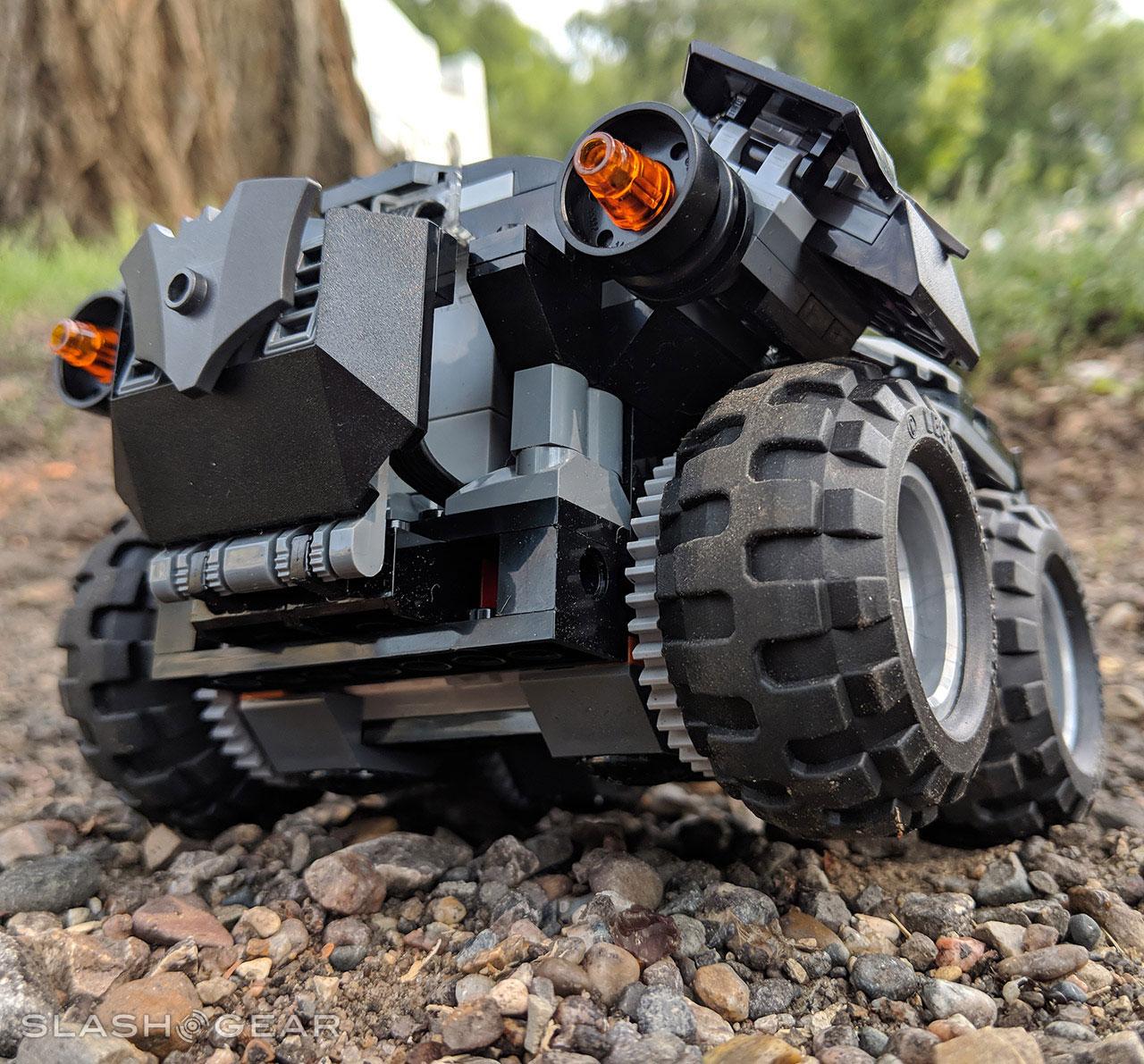 The back end opens down to reveal the two Powered Up Hub connectors. If you’re in the mood to modify, removing the hub also turns this area into a sweet amount of trunk space. You’ll need to add a few bricks to the roof, but still – this can fit SO many Batarangs. 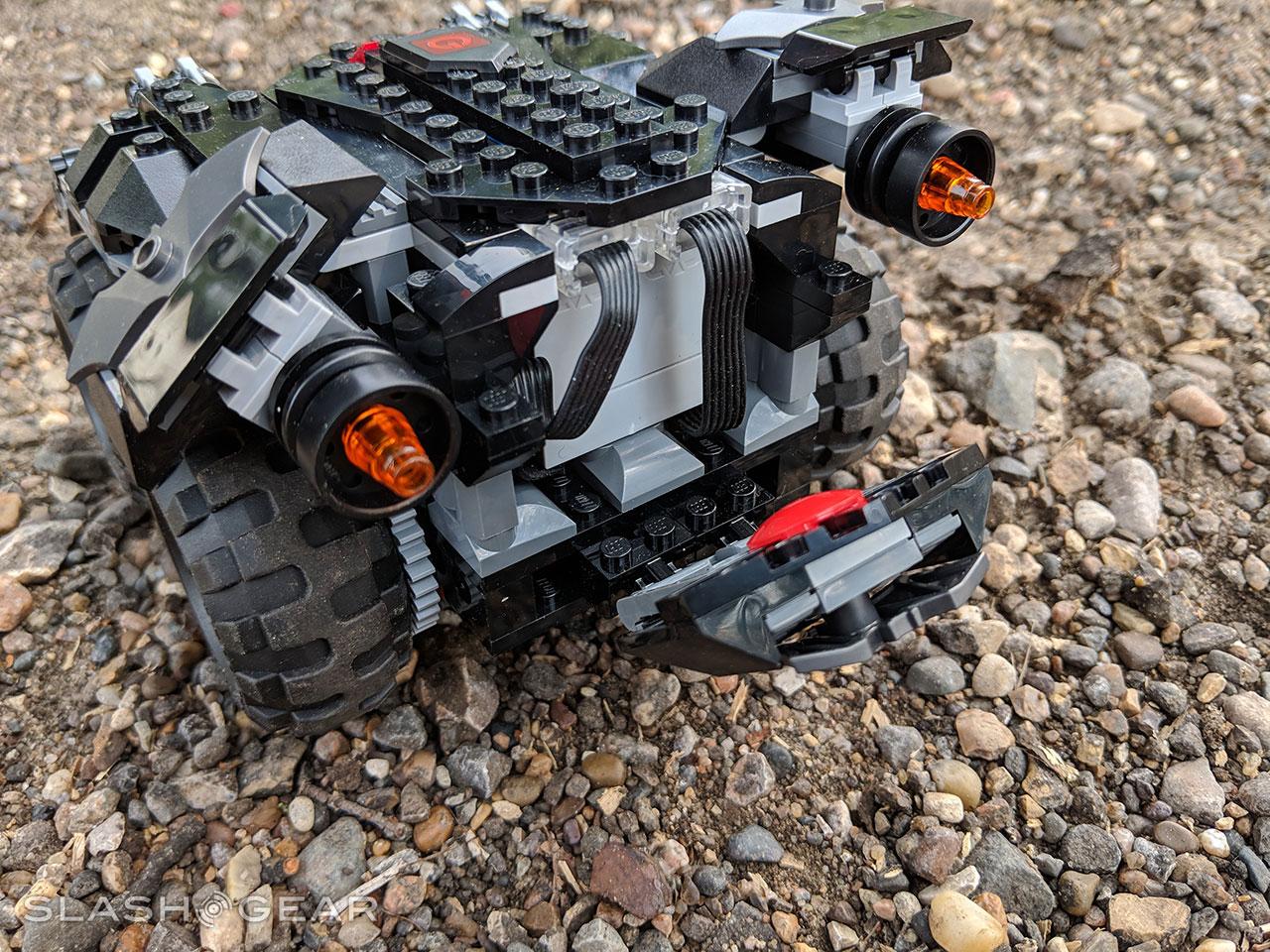 Two controllers are available through the LEGO Powered Up app. Both include controls for both sides of the vehicle, allowing the user to have rather fluid control over the vehicle’s movement. Make certain you’ve got a smartphone that can run this app (LEGO Powered Up) before you buy the Batmobile. Find this app on the iOS App Store and the Google Play app store immediately.

The Batmobile – like all LEGO bricks and systems – is made for indoor use. DESPITE that, given the beefy look and feel of this tank of a vehicle, I brought it outside for a fun and fashion-forward photo shoot. I also drove this Batmobile off a jump that was entirely too tall for the size and power of the vehicle. As such, I dinged a brick. 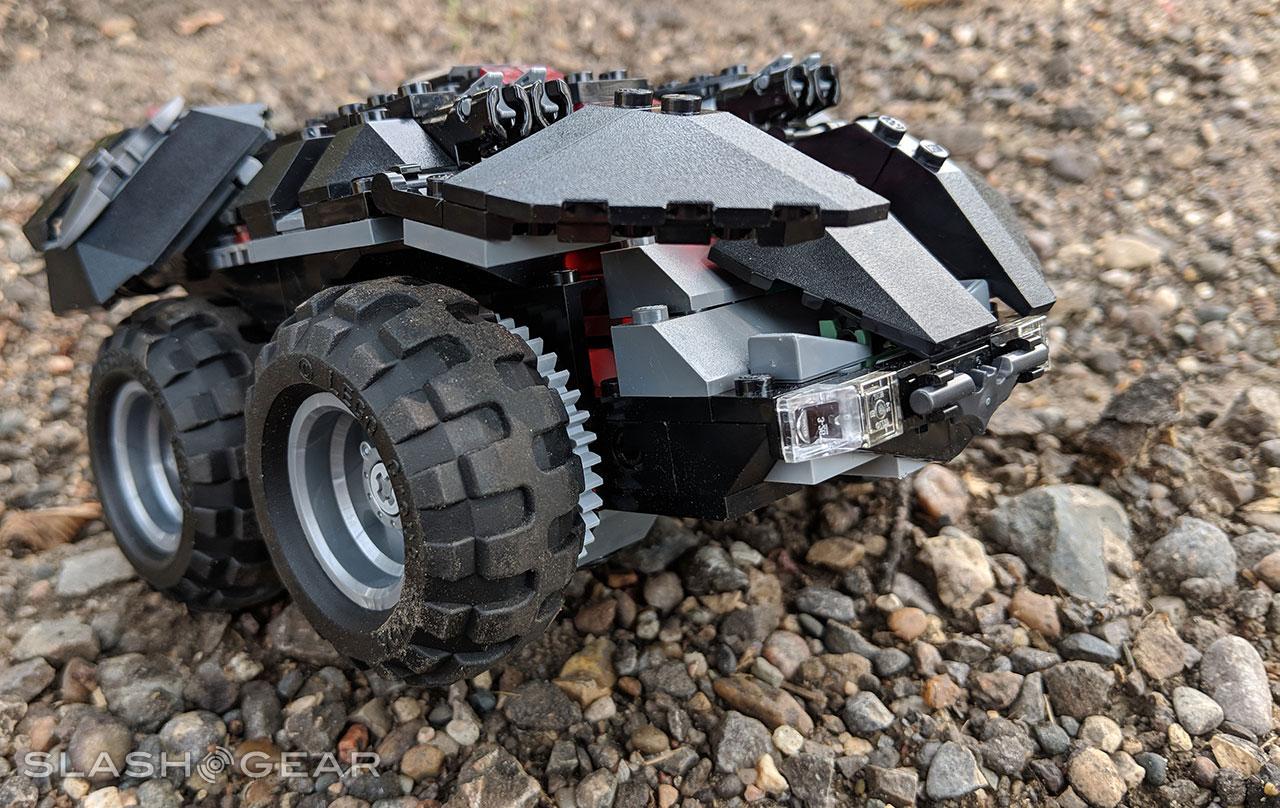 The power under the tail-hood here feels better suited to a LEGO train – if you’re used to driving higher-powered remote-controlled cars. If you’ve never used a remote controlled vehicle before, this Batmobile should seem real nice and swift! The torque with which this vehicle can operate seems to be right in-line with how fast the vehicle could go before crashing would result in broken bricks.

This LEGO Batmobile about to be on SlashGear goes all-in, even when that jump is WAY too big. (See https://t.co/knsiyKdadm soon for our full review) pic.twitter.com/FaJGuC2SDi

I GET why it’s not more powerful, but it’s a BATMOBILE, so it’s only natural to want to see it go ALL IN. Next step, I’ll be taking the Powered Up bits out and making a giant ramp to see how the machine fairs going HAM over a jump well past its most obvious capabilities. Slow-mo here we come! 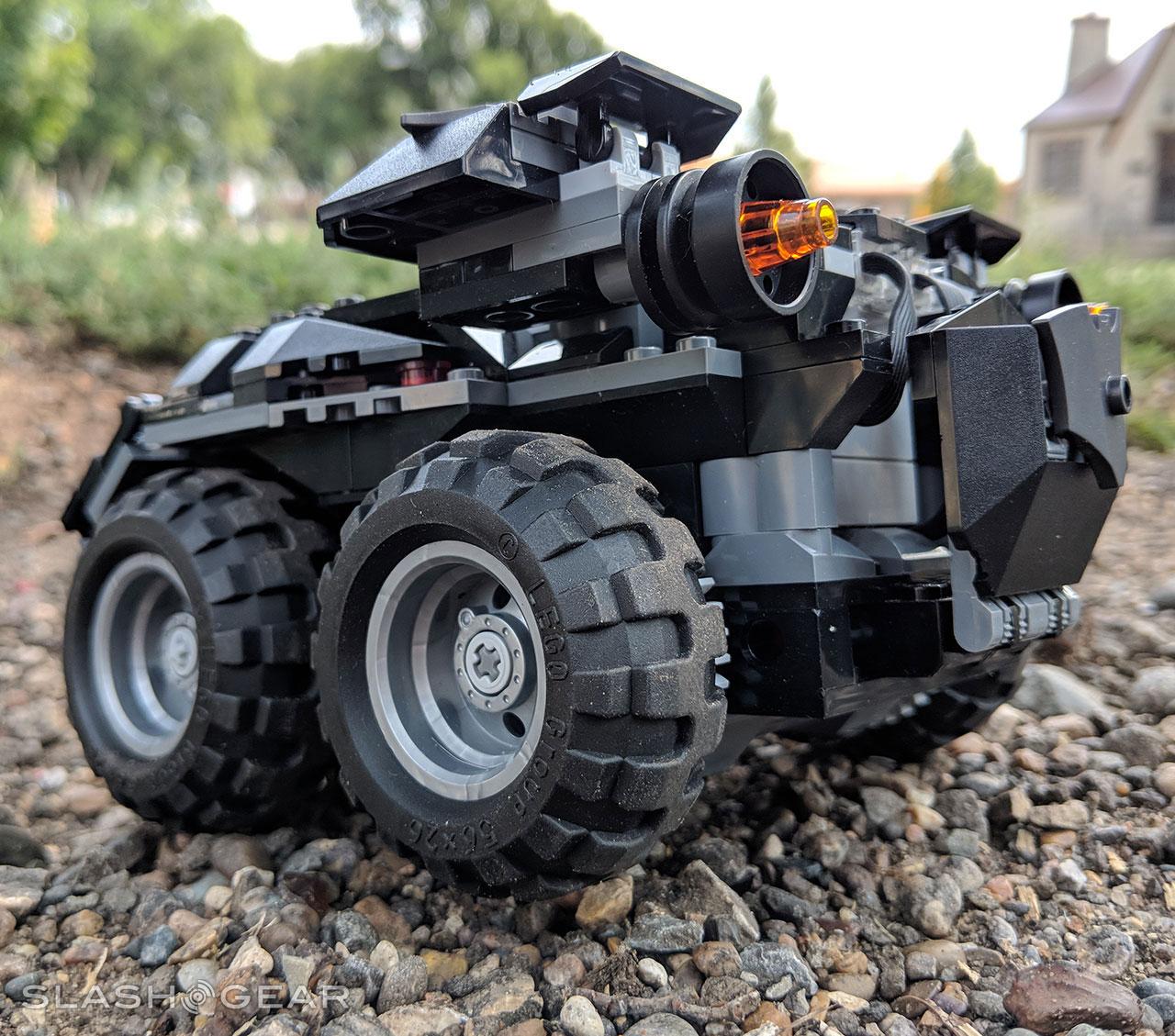 The LEGO App-Controlled Batmobile (set 76112) should be available in stores as of the posting of this review. This set can be found at LEGO Stores, on Amazon, and in department stores and toy stores of all sorts. This set comes with 321 pieces and will cost right around $99 USD, depending on when you get it.