AOC have announced a super-skinny new LCD monitor, the V17, which measures less than 12mm in depth.  Based around a 17-inch panel, the V17 runs at 1,440 x 900 with a contrast ratio of 5,000:1 and 10ms response time.  Despite the compact dimensions, it also manages to include a VGA webcam in the bezel. 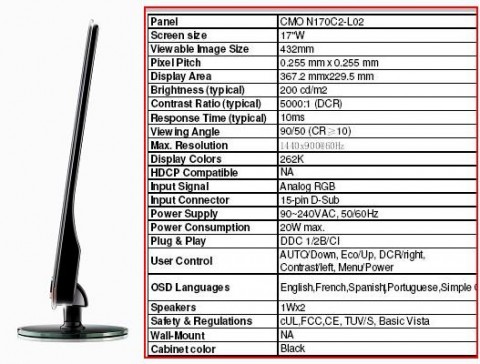 The V17 has a transparent bezel, glass base and integrated stereo speakers (albeit only 1W each).  Connections include a standard D-Sub for analog RGB, with a 3.5mm audio input.  There’s also a built-in digital microphone and AOC include video conferencing software.

The AOC V17 will be available at the end of 2008, with a MRSP of $199.99.  It apparently paves the way for AOC’s upcoming range of WLED ultra-thin monitors, while will be launched at the beginning of 2009.