The Star Wars iteration of the Angry Birds collection of apps has been updated this week with the dapper Lando Calrissian in bird form. This character is bringing along with him the ability to blast three bolts as his closest associate Han Solo bird, but instead of them being shot one after the other all in the same direction, they’re let loose all at once: two diagonals and a straight-on shot. This update also brings on a collection of power-ups activated in a similar way to the Millenium Falcon attack.

Angry Birds Star Wars continues the ways of Rovio’s lucrative in-game purchase model with a series of power-ups that are also sent out free for those that play the game quite often. When a user starts up this update of the game, a spin-wheel will appear, giving the user a set of new weapons to use with any bird they choose. 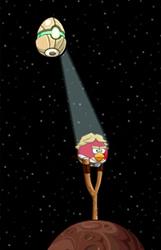 One of these power-up weapons os a thermal detonator – a count-down bomb, if you will. Another is a hologram projector : this power-up allows you to use the same bird twice (the first is holographic, but has the same powers and effects). There’s a power-blast sort of weapon that gives any character a power not unlike Han Solo’s blaster, and a Force-charged slingshot that allows you to shoot the birds twice as far as the regular, everyday slingshot.

These weapons are all available for use inside any level and can be attached to any character – but use them wisely: they run out, and they’re not free. They also take away the opportunity to use the character’s normal power in their launch – and they can be stacked.

Pig-poppers will want to make sure they’re keeping track of their weapon power-up belt – up top where want may turn to need rather quickly.

Meanwhile it would appear that Dagobah has had a single level opened up for teasing purposes while the $1.99 entry-fee stands. Of course winning every round with five stars is still a possibility, and you do get a “new lightsaber” when you pass the test. 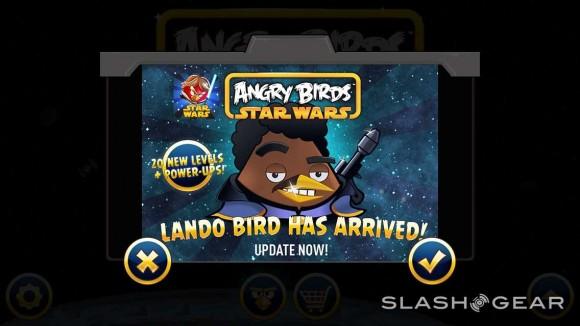