Welcome to the next chapter in the Star Wars saga ala Angry Birds – Bespin, also known as the City in the Clouds! What we’re seeing here is a massive expansion of the game with three full screens of action, including a set of super-secret Boba Fett missions for those of you that love the notorious feathery bounty hunter and his whole new look! You’ll find a new set of gameplay mechanics including STEAM as well – get ready to float!

This update brings you to Cloud City, that being the gas-mining operation run by your best buddy Lando Calrissian – also a new fine feathered friend here in this new set of levels. Here you’ll not exactly be following the Star Wars plotline with lots of escape missions and tricks. Instead you’ll be running at those Imperial pigs full force – blasters blazing! And don’t forget Chewie to hammer away at their towers with full-on bulk. 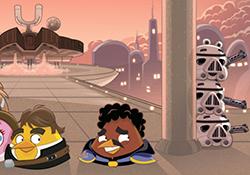 These levels have you floating in the clouds through 20 regular levels and the full set of Boba Fett levels if you dare! You’ll be able to get to the Boba Fett levels by finding each of the five hidden rocket packs, by grabbing a promotion code (we’ll see soon where those come from), or with a bit of cash via an in-app purchase. And don’t forget to stay on target with the rest of the empire-hunting loftiness this expansions provides! 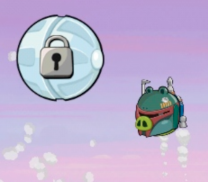 This update also brings on a connection to the Angry Birds cartoon series, if you’re so inclined to have a click. You’ll be able to update your iOS and Android apps starting today – immediately – right now! We checked! Both app updates are free, and as noted above, there is some in-game purchase bits and pieces available if you like to skip levels. Grab on with both hands and begin the battle once again!

And you can connect to Twitter now through the app as well – but don’t you dare brag about your accomplishments to us! We’re almost done already!