It’s time, ladies and gentlemen, the first full year of Angry Birds having a whole separate game dedicated to seasons is done, and your question has been answered: yes, Rovio will make a new Halloween expansion each year, not just the first! For those of you out there not having followed Angry Birds since the beginning, there was originally an Angry Birds standalone game and an Angry Birds Halloween standalone game. Once the Halloween game became nearly as popular as the original, Rovio got wise and continued the holiday theme, eventually combining them all into one single collection called Angry Birds Seasons – that tradition continues here with the expansion that started the whole thing: Halloween.

What you’ll be able to see here is several of the speedy tiny blue birds dressed up in classic Halloween costumes heading for a hill that sounds like its full of monsters. They seem all freaked out at first, then laugh with one another because they know they can handle the danger, no big deal. Once they approach the hill, they find a bucket full of candy. This bucket also seems to contain a small creature which we do not get to see in the flesh.

What we must assume here is that the monsters the three blue birds imagine will be boss-like bad guys at the end of every set of Halloween levels, for one. For two, the thing in the bucket, whatever it is, seems like it’ll be a new character fighting on the good guys’ side. Teeny tiny little bird of some sort, what will your powers be? Will you bring candy to me? We shall see!

BONUS: the folks at AngryBirdsNest have suggested that since this expansion is likely to be released around Halloween, the same time as rumors place the classic Tim Burton stop-animation musical masterpiece The Nightmare Before Christmas in theaters again in 3D, that this Angry Birds expansion might be a collaboration with the folks at Disney, the current distributors of the film. Rovio did a similar thing with the movie RIO when it was released, creating an entire spin-off game for the film.

What do you think? Is that candy-cane in the bucket of Halloween candy enough of a clue for you? Jack Skellington, will you be our new Angry hero?! 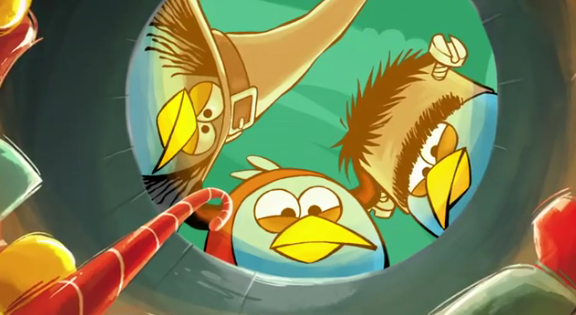