It isn’t exactly uncommon for planned features to be removed before software is released, but when something major, like fingerprint scanning support, gets the axe, one does start wondering why. Although we may never really know why, we now do know that such a feature was at least on the table and might have been intended for the Nexus 6 even. But alas, such things did not come to pass and we can only keep on staring at the source code in longing and bewilderment.

Evidence of the yanked fingerprint scanner on the Nexus 6 is provided by the Android Open Source Project or AOSP, the pristine open source version of Android before Google and OEMs put on their wares. Here, in commit d5340f3 for “Moto Shamu”, we see a message saying “remove fingerprint support” and nothing more. It should be remembered that “shamu” is the device name for the Nexus 6 and was once rumored to have a fingerprint sensor, which seems to have been en vogue already back then. Sadly, neither code nor traces of hardware could be found on the Nexus 6 itself.

But the Nexus 6 wasn’t the only one that would have benefited from that feature. As the reference device for Android smartphones, it would have meant that Android as a whole would have gained the features as well, which means API that app developers could use. And that seems to have been the case until commit 777f5b2 was pushed to hide the fingerprint API until a new one was ready. Obviously, the new one never became ready, at least for Android 5.0 Lollipop. 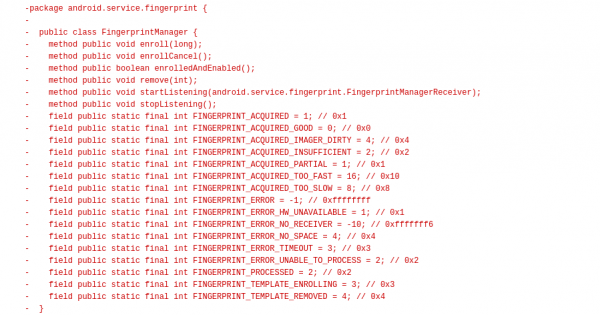 Other clues pointed at how the fingerprint support would work. It would of course be open to third-party app developers, something Apple only lately allowed for iOS 8. And again in contrast to Apple’s implementation, the Android way would have been to swipe the finger over the sensor instead of putting it at rest, something akin to how Samsung and HTC do it.

The lack of an official Android API for fingerprint scanners of course never prevented OEMs from striking it off on their own. An official API would have done a great deal of good at unifying those fragmented implementations. As sensors like these become more common, we are likely to see this Android fingerprint API return to the fold, but most likely not until the next dessert next year.