This week in Google‘s defense against Oracle the first ever Android revenue numbers have been revealed in court. The information you’re about to see, as Google warns us, is obviously not very new, but does goes us some measure of insight as to how Google worked with their mobile operating system at the time. The first sheet shown this week is an Android Ads Revenue chart which shows that Google at the time made more cash on Google ads on Apple devices than they did in the mobile realm than Android.

This revenue chart shows Google ad revenue across several platforms starting in July of 2009 and running until June of 2010. What you’ll see here is that revenue from Apple had been and continued to be Google’s highest paying venture in the ad space, while Android started very low on the chart and over the course of the year of time shown ran from near-last all the way up to 2nd place. That 2nd place point back then was still very low compared to Apple-based ad revenue. 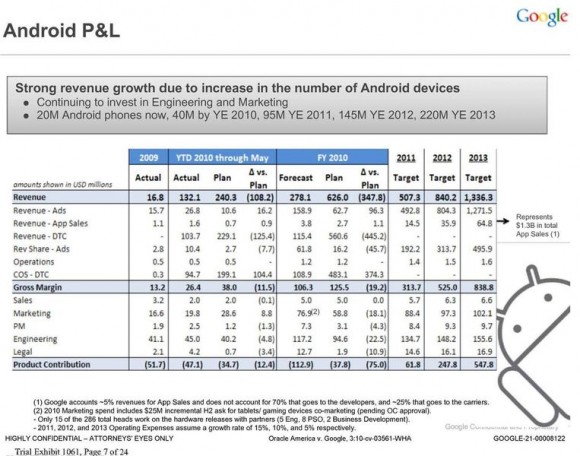 Google also shows their annual revenue run rate per Android handset during essentially this same period. You’ll see that the third month of 2010 was the best they’d done over the course of the year by far, with the next recorded period having a significant dip. This period is explained with the following: 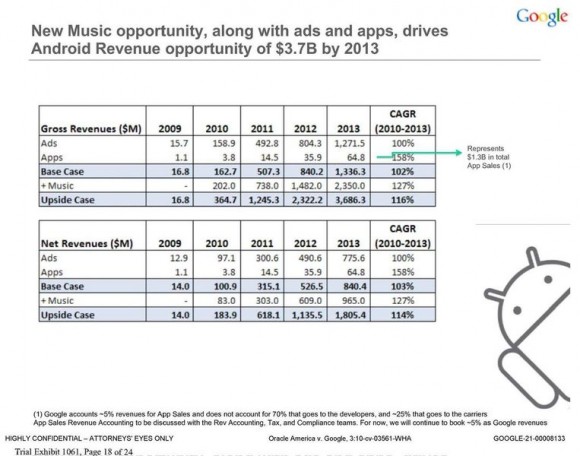 At that point, Android began to fragment heavily, seeing international appeal grow and the amount of cash Google got per unit take a hit. But it’s all relative, isn’t it? One more point of interest here in this Android quarterly report is their outlook for their new Music opportunity. Of course we saw this service launch inside what was then the Android Market and is now the Google Play environment as Google Music. What they show here is a possible revenue opportunity of $3.7 billion USD by 2013. We’ll see about that!