Last week the latest version of the Android N preview was released and there were several things inside the new version that had been updated. Among them were emoji that look more like people rather than blobs. Hidden inside this update was also some software that is for virtual reality. Apps will be able to register themselves with VR Listener or VR Helper.

These services can be seen in the settings-apps-configure apps- special access- VR helper services. The assumption is that this will work like the notification access service that Android Wear uses to shoot notifications over to a wearable device. That VR Helper services screen will show the apps that are using the API and users will be able to deny the permission if they want. The permissions warning that users will see when apps want to use the VR service reads, “[app name] will be able to run when you are using applications in virtual reality mode.” There are no hard details on the virtual reality mode. 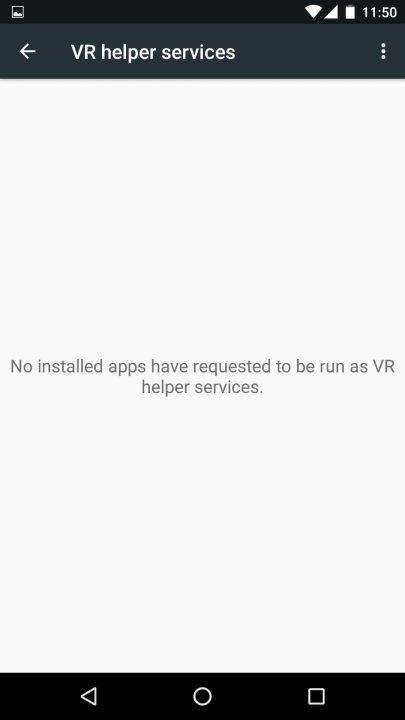 It would be easy to assume this is a mode that will turn on when the user has their smartphone in a VR headset, but it’s unclear how it will work at this time. Rumors suggest that Google is working on a smartphone powered VR headset and a standalone VR device. If these rumors are accurate, having a VR mode on the smartphone would possibly be needed. Another new feature found in the update is a sustained performance mode. Presumably, this mode would configure the processor and software to allow the device to run for extended periods at higher outputs, such as what you would need if you are playing a VR game that is taxing the CPU and GPU.