The latest Android distribution numbers are here from Google, and they’re showing an expected uptick in the number of devices running Android 6.0 Marshmallow. Of course, with Marshmallow being the newest version of Android, you’d expect its adoption rate to increase as time goes on, but here we’re beginning to see Marshmallow move within striking distance to one of the versions ahead of it: Jelly Bean.

According to these numbers, Marshmallow is running on 15.3% of devices capable of running the latest Google Play Store app, which includes every version of Android from 2.2 Froyo and beyond. Compare Marshmallow’s 15.3% to Jelly Bean’s 16.7% and it becomes clear that Marshmallow will soon be eclipsing the aging Android 4.0. Jumping ahead of KitKat and Lollipop won’t be quite so easy, as those sit at 29.2% and 35.5% respectively.

Still, as devices shed their old versions in an effort to come up-to-date, we’ll see Marshmallow move into the top spot – just don’t expect that to happen for a while. Meanwhile, there are a fair number of phones and tablets running older versions of Android, with Ice Cream Sandwich still seeing 1.6% distribution, Gingerbread sitting at 1.7%, and Froyo mustering a measly 0.1%. 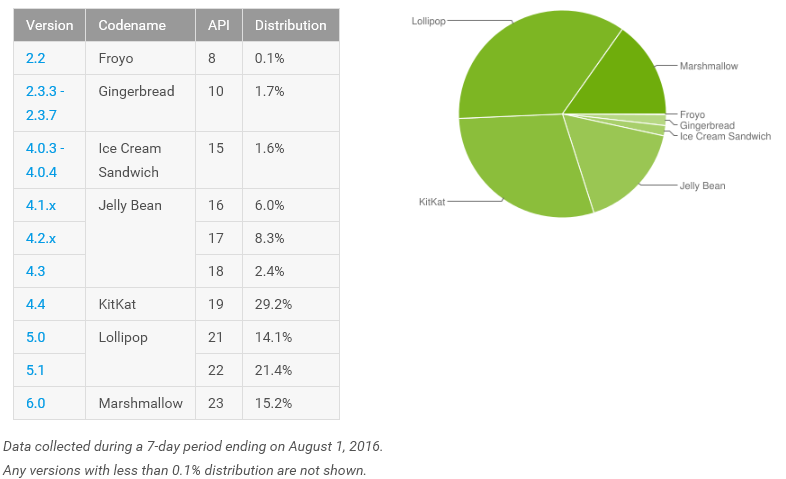 This news comes as the world prepares to meet the next version of Google’s mobile OS, Android 7.0 Nougat. We’re hearing that Nougat could arrive as soon as this week, but that doesn’t necessarily mean Marshmallow’s uptick in adoption will slow by any considerable amount. Manufacturers and carriers are typically pretty slow to update to new versions of Android – as evidenced by the fact that Marshmallow is only at 15% adoption after almost a year – and the only handsets practically guaranteed to get Nougat quickly are Google’s own Nexus devices. In other words, expect Marshmallow’s climb to Android dominance to continue for quite some time.