The mobile browser speed wars continue, and the latest fray comes courtesy of website optimization firm Blaze with claims that Android is 52-percent faster than iPhone, and quicker – in real-world testing – on 84-percent of sites. That’s despite Apple’s much-vaunted Nitro JavaScript engine, new to iOS 4.3 on the iPhone and iPad 2. We spoke to Blaze to find out more about the testing process, and in what ways the company was interpreting the results.

Traditional benchmarking, Blaze suggests, is generally custom-created and doesn’t relate especially well to the real-world. SunSpider and other tools, the company claims, don’t reflect actual user experiences. Instead, Blaze used a homegrown browser wrapper app – available to try from its site – to time loading speeds on 1,000 different sites, loaded onto an iPhone 4, Nexus S and Samsung Galaxy S. The eye-catching “52-percent faster” figure is based on median load times across all of the pages: on iPhone it was 3.2 seconds, whereas on Android it was 2.1 seconds.

The report also points out in the appendix that their tests on both devices were not actually done in the devices browser themselves but rather used the proprietary software Blaze created, noted above, to track the browsers performance.

Nonetheless, Blaze also cites individual site performance, and some of the differences claimed are considerable. WSJ.com, for instance, took 7.5 seconds on Android and 17 seconds on iPhone during its testing. When we repeated the tests using the Blaze timing tool, however, we found an iPhone 4 loaded the WSJ site faster than the Nexus S every time. Blaze CTO Guy Podjarny re-ran the WSJ tests at SlashGear’s request, and found median load times on 18.4 seconds on iPhone and 13.4 seconds on Android; not, he admits, the 10 second gulf previously observed, but “still a clear difference.” 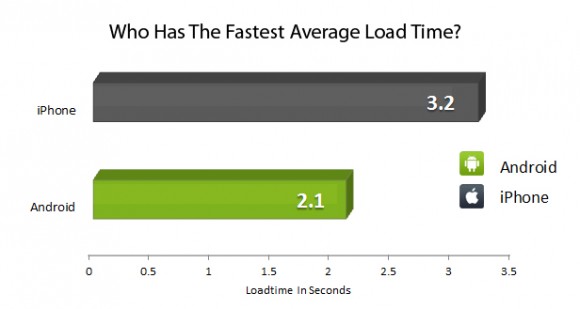 Podjarny concedes that there can be significant differences depending on when you test and with what connection, but insists that there’s more to browser performance than pure JavaScript speed. He describes the Android browser as “smarter in more ways than just JavaScript,” for instance in how it handles image downloads. While the iOS browser seems to download images in the order they appear on the page, the Android browser “seems to use intelligence when choosing which images to download first, trying to download as much from the same server at once as possible.” Meanwhile on Android CSS or JavaScript files, as well as other resources, can be downloaded in parallel, while on iOS, Podjarny says, they happen one at a time.

Interestingly, during the Blaze benchmarking process, the company says it has seen various sites (and benchmarks) that “indicate Nitro is sometimes on and sometimes off.” It’s too early for them to say anything conclusively about it, but Podjarny suggests it maybe be down to memory issues. JavaScript performance alone may be more hyperbole than you’d think, however. Comparing Android 2.2 to 2.3, the JavaScript boost is marginal: an almost 40-percent increase in JavaScript engine performance led to just a 10-percent boost in page load time. 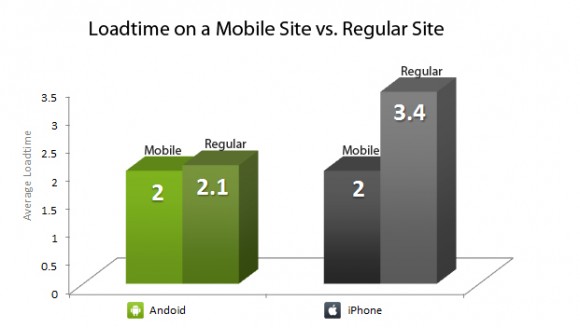 In the end, as Podjarny agreed, the value of benchmarking is always impinged upon by the nature of real-world connections. Blaze used a “fast WiFi connection” at night and during weekends where it could be more confident that network usage was low, but of course that’s not a consistency upon which mobile users can rely on. Stand an iPhone 4 and Nexus S user next to each other and, even on the same cellular network, they could well see different performance from the dumb pipe itself. That’s before it even gets to the rendering engines on either platform.

Podjarny tells us Blaze isn’t conclusively saying that specific sites take longer on one device versus another, but that the testing “does conclusively say which device generally loaded web apps faster.” To that we’d add our own skepticism, both of the inconsistencies in results from Blaze’s software wrapper and the nature of mobile device benchmarking as a whole. We’re also confident that both Apple and Google will continue to polish browsing technologies in the attempt to bring the best possible experience to their users. One thing’s for sure, the battle of the mobile benchmarks is unlikely to go anywhere as manufacturers and software developers compete to brand their offerings “the fastest browsing experience.”

Blaze’s research is available here; we’d be very interested to hear SlashGear readers’ thoughts on it, and how the results match your own experiences with mobile browsing.