Our demo series continues with the Galaxy Nexus running Android 4.0 Ice Cream Sandwich, in this episode taking a look at Facial Recognition, Notifications, battery life, camera speed, GPU Rendering, and Recent Apps. In this post you’ll find a video featuring Vincent Nguyen who will also end up doing the full review of both the hardware and the software here on SlashGear. When you check this post out, keep in mind that this is one of the first wave of devices otherwise known as the international edition able to work on T-Mobile and AT&T bands. We have yet to see the Verizon version of this device, but everything you see in this video series should essentially be the same situation as that release.

As you may remember from our first encounter with the Galaxy Nexus back in Hong Kong, the Android authorities showed off their newest method for unlocking a device, namely Facial Recognition. What we’ve found thus far is that not only is this recognizing of the face (once you’ve got it set up for the first time) extremely quick, it no longer seems to have the ability to be broken into with a mere photo of the person trying to do the unlock. We heard a story or two about early Ice Cream Sandwich builds being able to be unlocked by a 3rd party if they had a photo of the person who originally set up the lock, but this seems to be fixed. 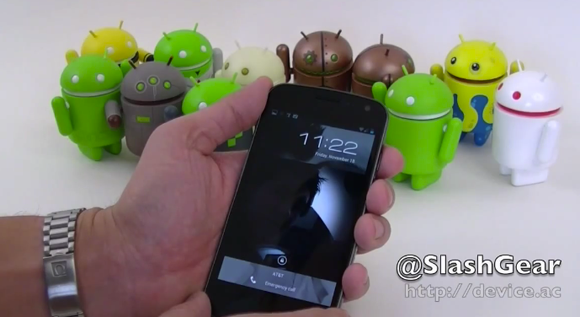 Recognition seems to be both quick and accurate, and furthermore doesn’t seem to rely on a full face to work. As you’ll see Vince attempt in the video, putting your hand over your face up to your nose seems to unlock the screen just as readily as having your entire face revealed. As for the other unlock sequences, the pin code unlock remains largely the same while the pattern unlock now has much more classy sized set of dots so that your unlock screen wallpaper can be seen while you make a combination of swipes to get into your device (image at the head of this post.) 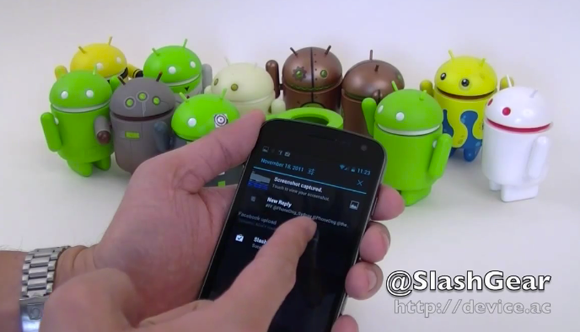 Your battery can be tracked, just as it could in Gingerbread and Honeycomb, from your settings with a chart that shows in a slightly general chart of what’s been active and using up your battery at what times during the space between when your phone was last off and now or when your device was last turned all the way off. As Vince will show in the video, he’s had the device on a LOT while he’s been testing it, and if you’re the type of person to use your device all day long, you’re looking at something like seven to eight full hours from what we’re seeing so far.

The Galaxy Nexus has a 5 megapixel camera that Google is promoting as having zero shutter lag – this essentially means that we should be able to take photos as fast as we can tap the display – on this device we only have the choice of tapping the display, mind you, since there is no physical camera button. In the video you’ll see that as Vince taps the display, there isn’t a shutter noise, there’s a *tink* noise that lets you know you’ve fired off a shot. You’ll hear Vince firing off shots indeed just as fast as he taps. You’ll see the shots he’s taken in the gallery below – judge for yourself how nice they look, and note that Vince is in basically an ideal lighting situation with several photo-quality lamps shining down on his collection of Android toys on a white background. 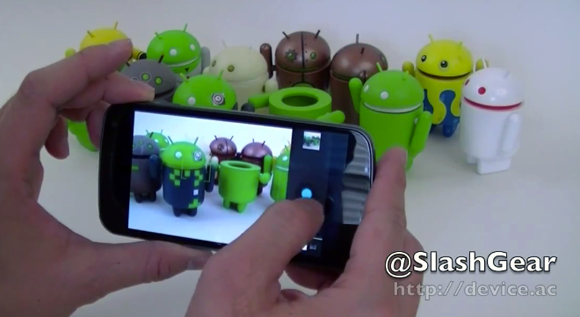 Image stabilization does not seem to be up to par here, not with the iPhone 4S as Vince notes, and believe it or not, not with Samsung’s other hero device Galaxy S II’s camera either. 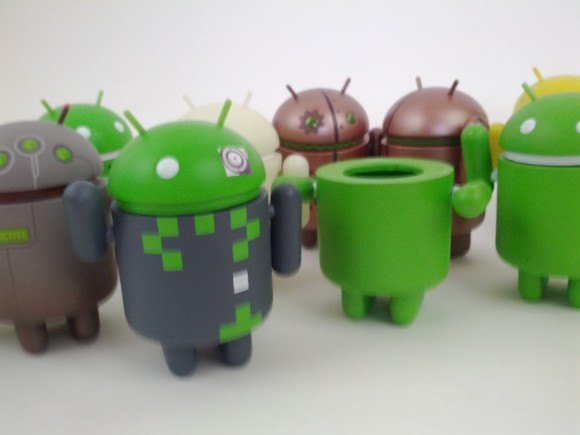 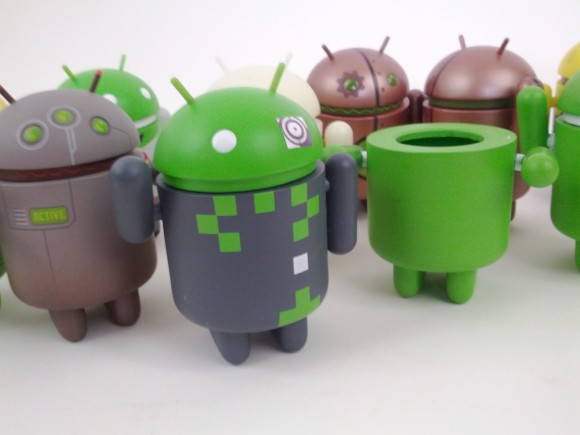 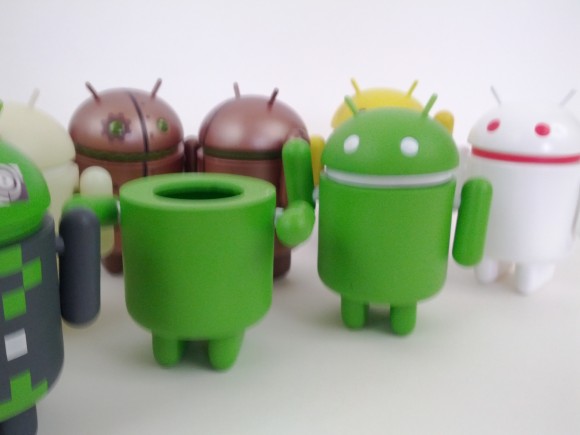 Starting in Ice Cream Sandiwch, Android will be working with any hardware its on to utilize the GPU cores inside the hardware’s processor. While before now games and other graphics-intensive apps have been able to access GPU power via APIs, now any application developed against the Android 4.0 SDK (API Level 14) will automatically get a very real performance boost. Visual elements in apps developed for Ice Cream Sandwich will be routed through the GPU by default, this both freeing up the CPU cores in the device to do tasks better suited to CPUs, the visual bits will run much more efficiently because they’re routed through the GPU. 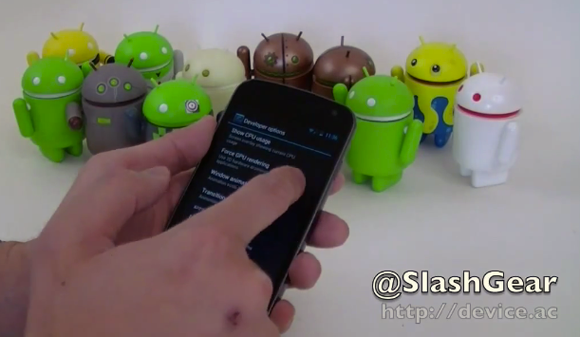 You can turn this option off, effectively, by heading to your Settings, then to your Developers options, then scrolling down and tapping the “Force GPU Rendering” option. Though why you’d want to do that, I do not know, because with this option ON, all of your apps will run more efficiently.

Similar to what we saw in the tablet-based version of Android version 3.0 Honeycomb, we have the option of accessing a list of Recent Apps. These apps appear with an icon representation, the title of the App, and a thumbnail sort of screenshot of the last time the app was open. What Vince will show you in the video is how simple it can be with one of the options to remove any app from the list. Another option you have is to push or pull each app from the list the same way you can with a notification in your pull-down notifications menu. 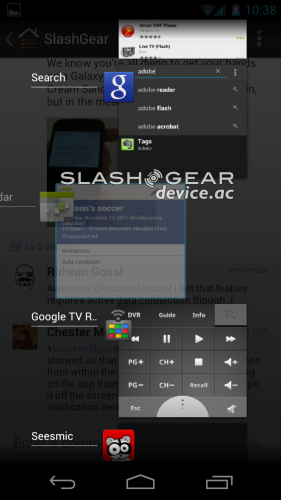 Fun stuff! Stay tuned to SlashGear for the rest of our hands-on series as well as a set of full reviews, one for Android 4.0 ICS, another for the Samsung Galaxy Nexus.