Amazon phone denied but “more devices” on the way

Though he’s not yet confirmed that there will be any sort of smartphone-sized device appearing soon, Amazon CEO Jeff Bezos has let it be known that more devices are, indeed, coming eventually. Speaking with Ina Fried and Tricia Duryee of All Things D, Bezos spoke about how their next move wont necessarily be to enter the smartphone universe, but that they’re certainly not going to stop with the Kindle Fire HD. Though “not any time soon”, more devices will be released by Amazon “next year” that Bezos said would be “premature” for him to talk about.

This bit of information doesn’t exactly bring us anything new on the device front other than what we learned about yesterday, but it does let us know that Amazon will be continuing on in their journey in the hardware world. With the Kindle Fire HD 7 and Kindle Fire HD 8.9 having been released yesterday, the company is set for another very possibly blockbuster holiday season. Both devices, along with a couple new ereader-specific machines, will be appearing in stores over the next few months.

Bezos also spoke about the fact that each of the Kindle Fire HD devices being offered this season will be showing Special Offers on their lockscreens. From this screen on each of the devices, you’ll have the option to either unlock to your normal user interface or head straight to a bit of media which you can then buy. Unlock your device or purchase The Hunger Games – your choice! Previous devices from Amazon have had the option of a lower price with Special Offers or a higher price for an ad-free model. 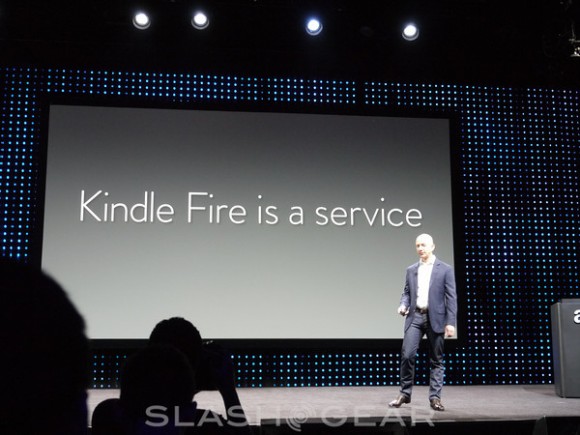 When asked why Amazon opted for only Special Offers versions of the devices this time around, he noted that “no one really buys the non-special offers version”. This plays well into the company’s assurance that a fabulous piece of hardware should also include a fabulous connection to media of all types as well. Check out the post “Kindle Fire is a Service” for more information on that situation.