In the short time I’ve had the Amazon Fire TV Omni Series on the SlashGear review bench, I’ve found the hardware to be highly decent. The controller is light but solid, small but not too small to fit naturally in my hand. The TV set is large, bright, colorful, and viewable from effectively any angle.

The setup process was dead simple. This television is relatively gigantic, so I was supposed to have a second person assisting me with removal from the box. It was light enough, however, that I was able to pick the whole thing up and move it into place before attaching its included legs. 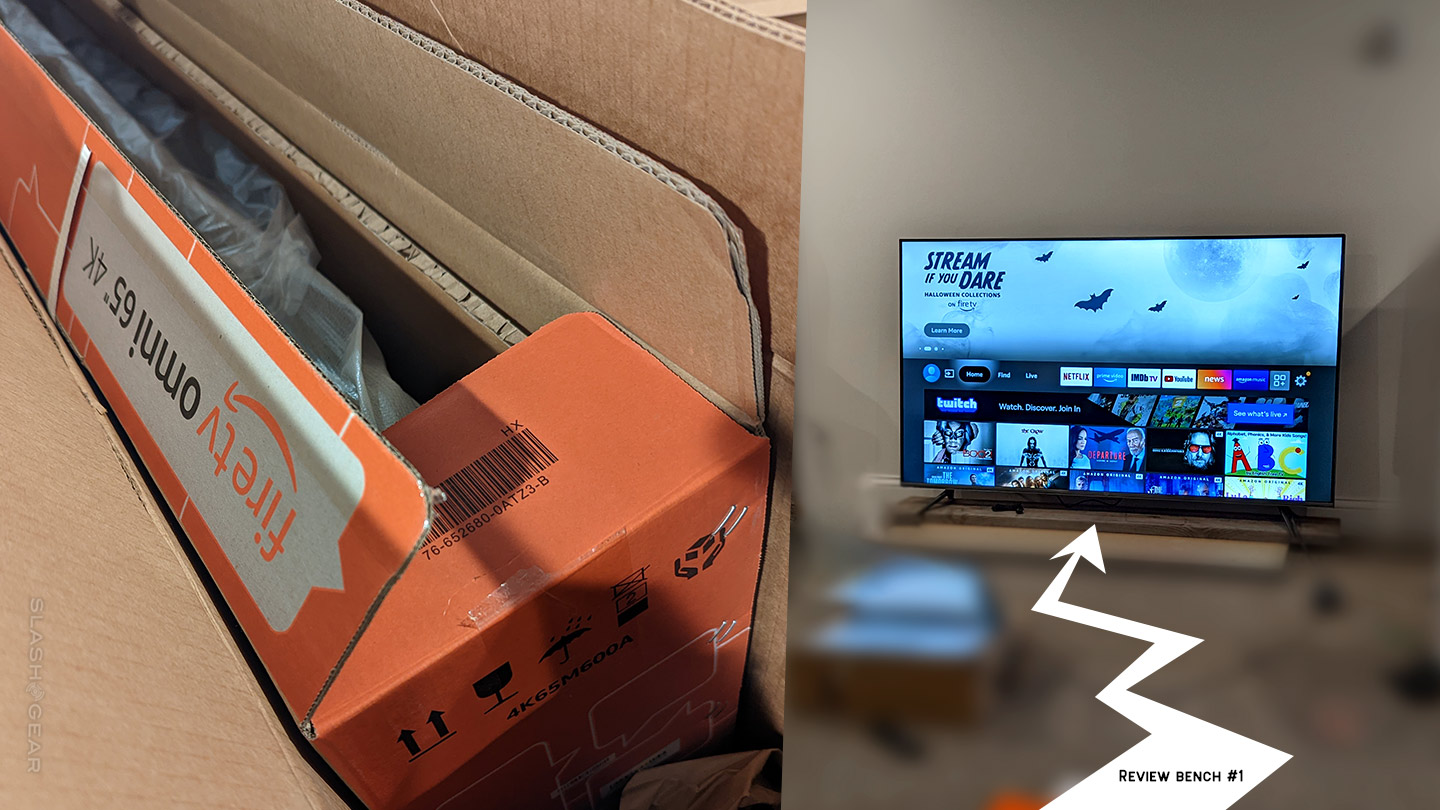 The TV legs attached with 4 Phillips-head screws, and the TV set plugged in to an included power cord. I had the option to connect an included IR emitter – but didn’t need said emitter in order to use the included remote control. That’s the Fire TV Alexa Voice Remote, which came with 2 AAA batteries for out-of-box operation.

Amazon wants you to own this television so you’ll use Amazon Fire TV services. If you’re already an Amazon Prime member, this TV set will make it far less likely that you’ll ever stop paying for said service’s subscription. You can potentially use this TV set without an Amazon Prime subscription, but Amazon will do its best to convince you to join up if you’ve not already done so. 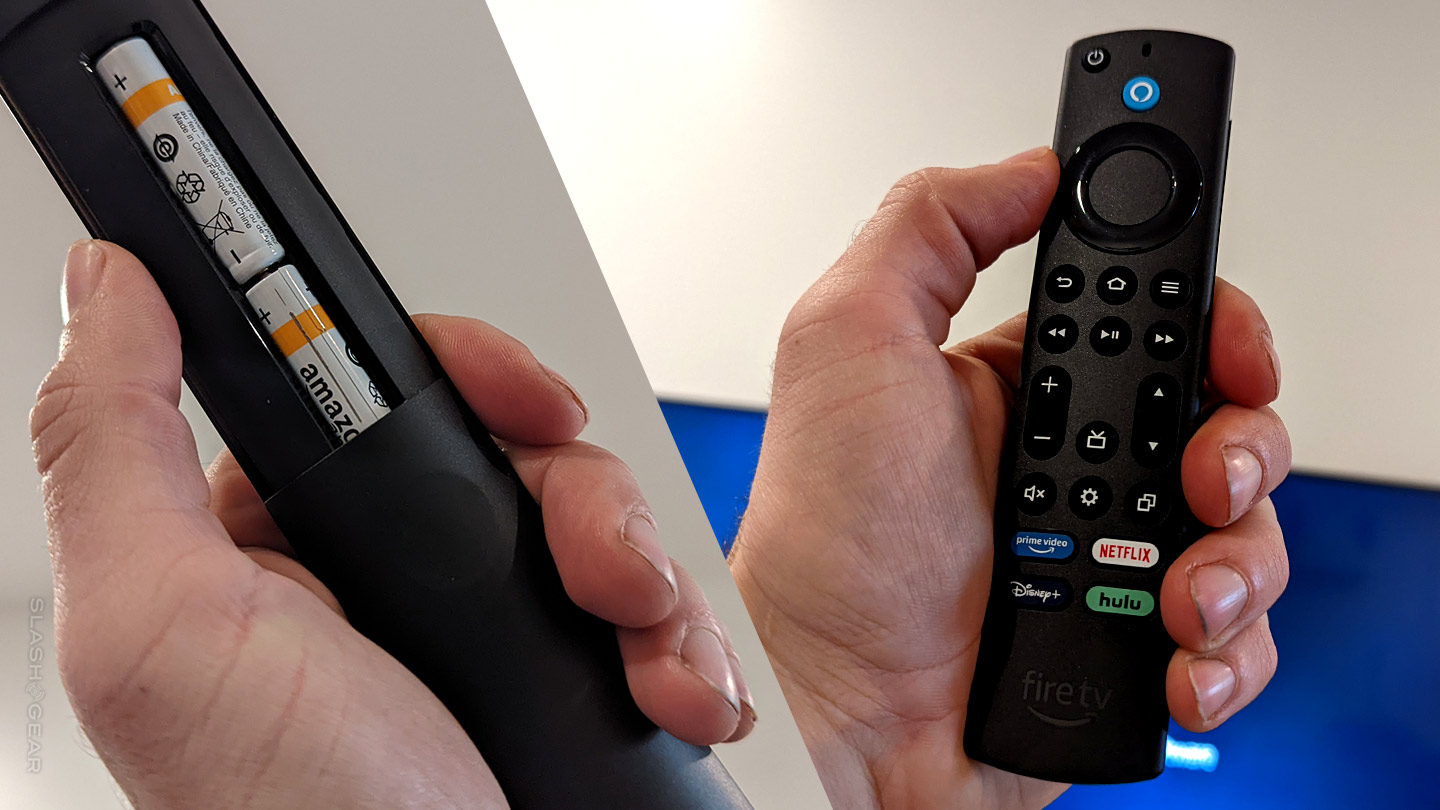 This TV set is not free from advertisements. You’ll find advertisements for Amazon-sold products and services when the device is left on a home screen for a given amount of time. You’ll see suggestions for content, and all the inroads to up-sales Amazon could fit.

If you do not plan on using Alexa at all, whatsoever, you might want to look for a different television. If you own this TV set and change your mind about Alexa, you can opt out of always-listening features on the remote and deactivate the TV set’s microphone array with a physical switch. 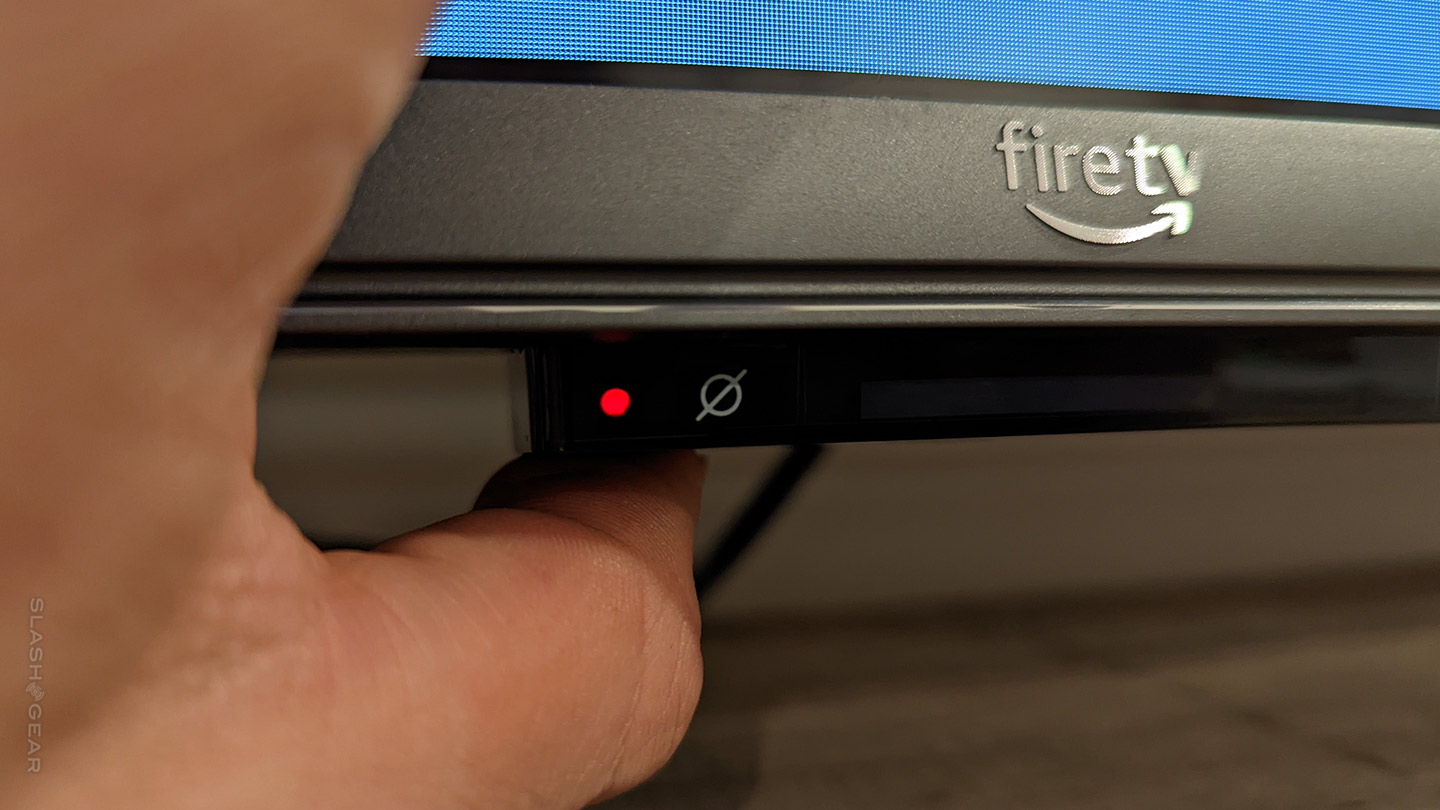 If you have this set and plan on using Alexa, be sure to note the features that are still “Coming Soon” as of launch day. Those features include Alexa Home Theater (for wireless Echo speakers), Alexa Conversations for Fire TV, Smart Home Dashboard, Alexa Shortcut Panel, and Zoom Video Calling. 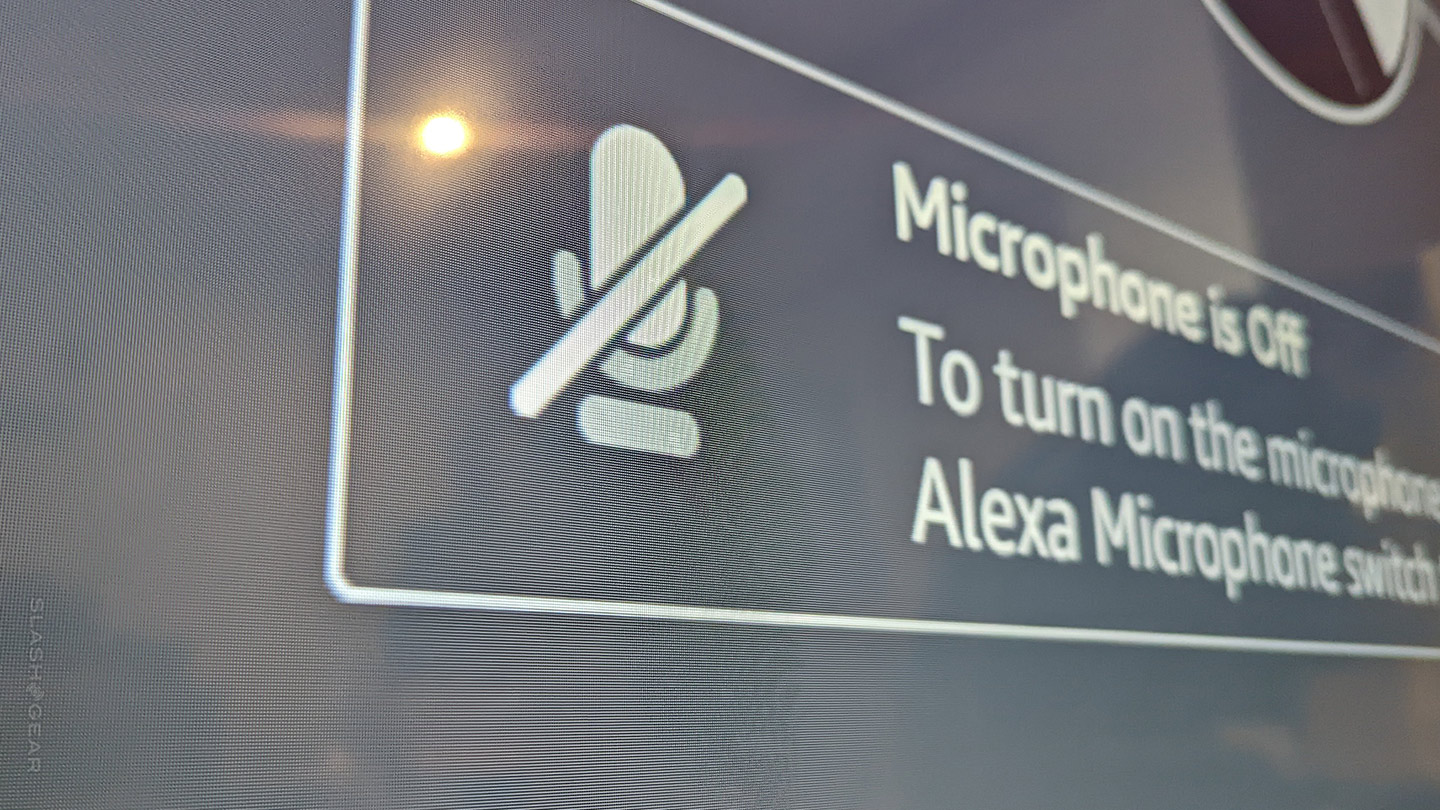 This TV is part of the Alexa mobile app’s Alexa Routines device collection. The process is fairly simple, connecting a chosen phrase to a set of actions. With one command, the Alexa Routines system can turn the TV on, search for a certain sort of content, and a wide array of other actions with the TV and other connected Amazon devices.

This is one of those features that I’d need to really sit and think about enacting, if I really owned this television set. When I have a spare moment where I’m able to sit and and watch TV, using the buttons on the remote to select the content I want to view has become part of my relaxation ritual. 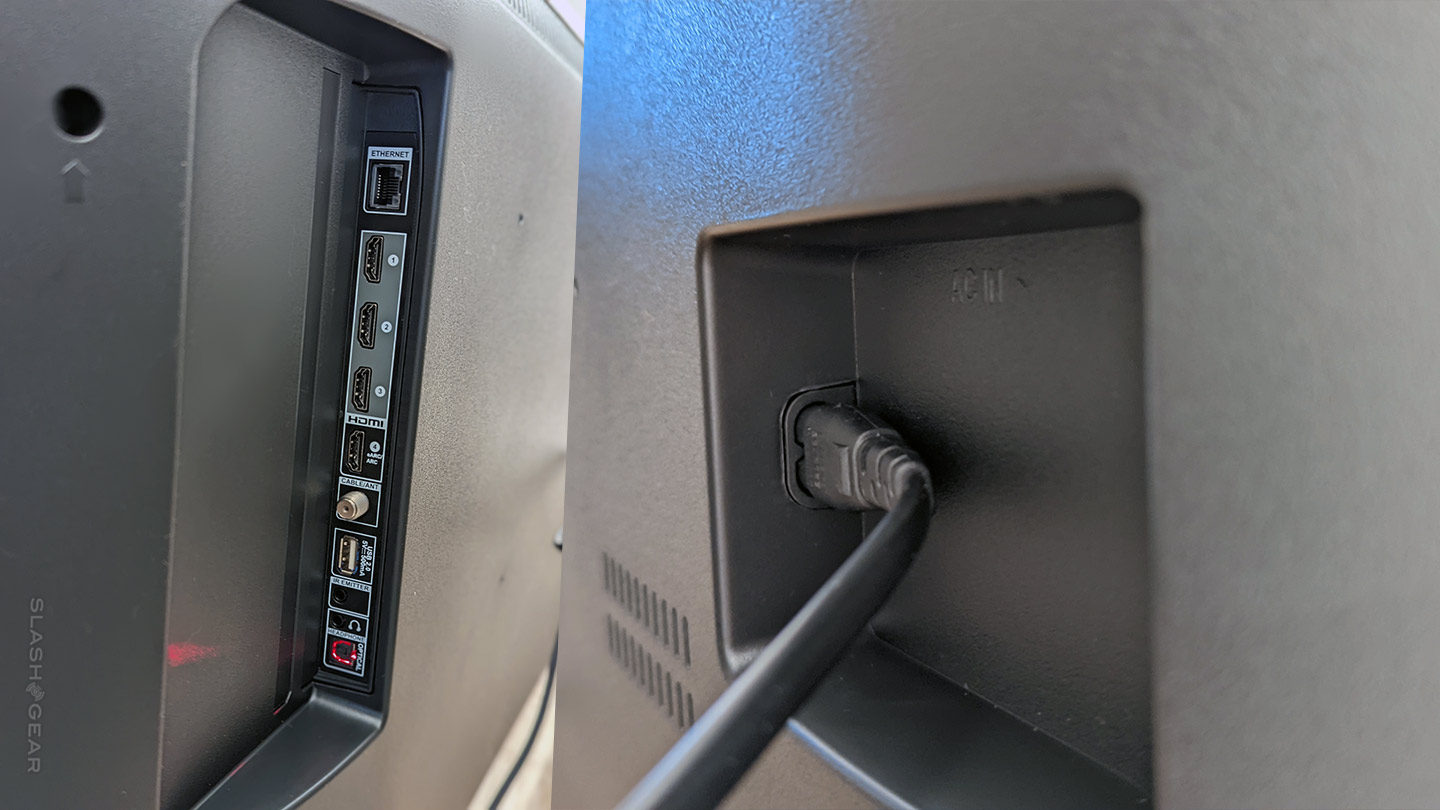 As it is with most Alexa voice actions, I find that using Amazon’s voice assistant is more often a fun “look what I can do” sort of tech than it is an invaluable part of my day.

This TV set did have some exceptions to the rule, I found – including simple actions like “Alexa, tune to Disney,” and “Alexa, what’s the weather for tomorrow.” The first command works for Live TV control, the second works with what Amazon calls a “visual response that appears on a portion of the screen.”

The Alexa feature I’ve used most often so far is “Alexa, turn on/off closed captioning.” This works on Prime Video, and I look forward to the time at which it works for all of the apps that can be used on Fire TV. Alexa was also able to faithfully “turn the volume down” and “switch to Xbox” (after I assigned an HDMI input to the Xbox Series X I had connected).

Display Mirroring works with Miracast, and does not work with MacOS, iOS, or either Windows or Android devices that do not explicitly support Miracast. I was able to get a Windows 10 Surface Laptop to use this feature, but the result wasn’t great. Mouse movement had significant lag and the resulting on-screen image was stretched. On the plus side, video played in any given app or web browser matched up with its corresponding audio – so there’s hope that this feature could be great with a few tweaks.

There’s word this (and other Omni and 4-Series TV sets) will get Apple’s AirPlay in the near future. We’re crossing our fingers it’ll be soon – but we will see! UPDATE: Amazon confirmed that AirPlay will, indeed, be coming soon.

If you’re looking for this television on Amazon, you’re going to find it with the title “Introducing Amazon Fire TV 65″ Omni Series 4K UHD smart TV with Dolby Vision, hands-free with Alexa.” At the moment at which this review is set to be published, this set has a price of $829.99 USD, with the potential for free delivery. This television set is “Brand: Amazon” and comes with a 1-year limited warranty and a 30-day Amazon Device return policy.

This television is worth its price so long as you understand that you’re buying an Amazon-serving device. If you’ve ever used a Fire TV device or an Amazon Fire tablet before, you know what I’m talking about. This is not just a blank display, it’s a smart TV. And it’s not a smart TV platform like Apple TV, Google TV (or Android TV), Samsung TV, or any other smart TV platform. Amazon Fire TV is more aggressive than any other smart TV platform in its upselling and suggestions for Amazon content and services, of which there is no shortage. If that sounds alright to you, this set is great!