Amazon’s Echo Show 10 is big on eye-contact. Now in its third-generation, the rotating smart display has the same screen as its predecessor, but mounted on a swiveling base that uses person-tracking to make sure it’s always facing you. At $250, it’s also Amazon’s most expensive Echo Show model so far.

The screen is a now-familiar 10.1-inch panel running at 1280 x 800 resolution. It’s bright, albeit not the crispest panel when you get close, but it’s big and clear enough for you to see from across the room. There are volume buttons on the top edge, plus a microphone mute button, and a physical slider to cover up the 13-megapixel camera. 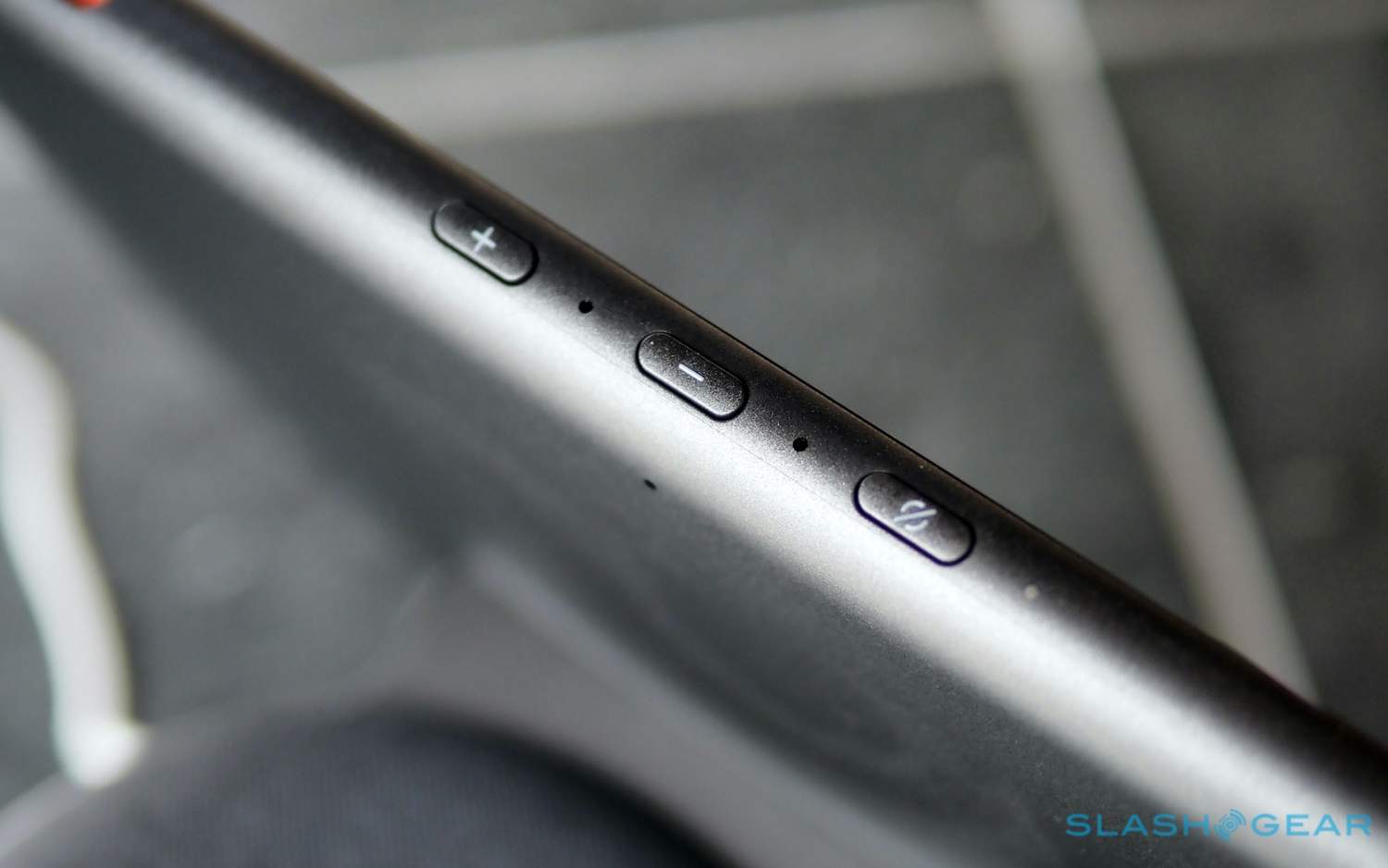 In the cylindrical base, meanwhile, there are two 1-inch tweeters that face forward, and a 3-inch woofer that points down. The result sounds better, and louder, than the smart speaker’s dimensions might suggest. As is often the case, it’s the mids which are weakest, but I was surprised at how much volume it could produce to fill a room.

Since it doesn’t have wheels, the Echo Show 10 isn’t going to follow you around the house. What it can do, though, is rotate almost 360-degrees, spinning around in order to keep the screen facing you. Whether that’s useful really depends on where you put your smart display, and how you actually use it. 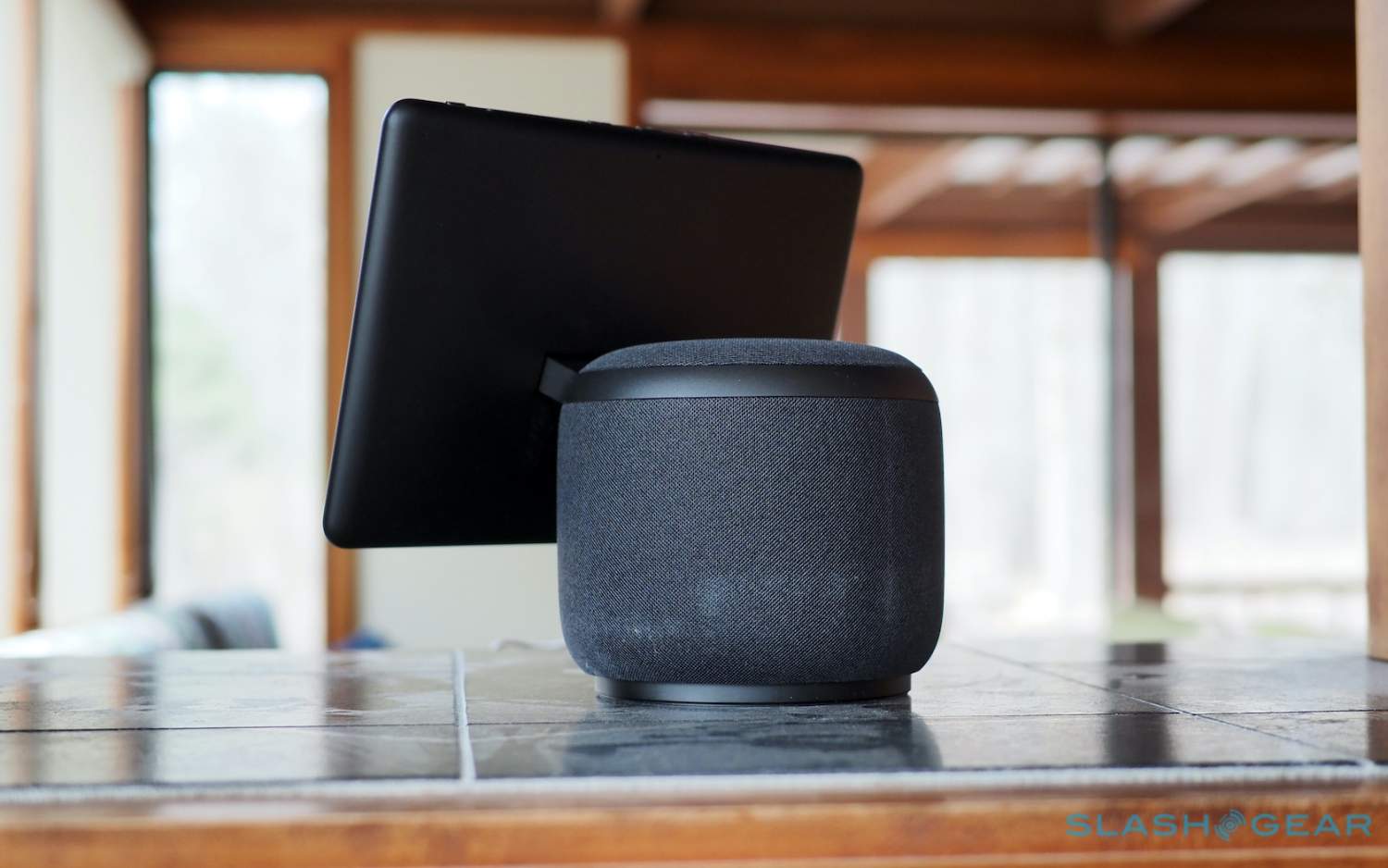 Put the Echo Show 10 on a kitchen island, for instance, and you’ll be able to use it whether you’re at the stove on one side, or sitting at the table on the other. Our dining room is separated from the living room by an open shelving unit: the Echo Show 10 could sit on that and twist to deal with commands and questions from both rooms.

When you first set it up, you’re walked through finding a position where the display can cleanly turn without hitting anything. You also set up the default position, and how far in either direction from that it can rotate. It’s worth noting that it won’t do a full spin – you get 350-degrees – and once it reaches the limits it’ll have to turn back in order to keep following you. 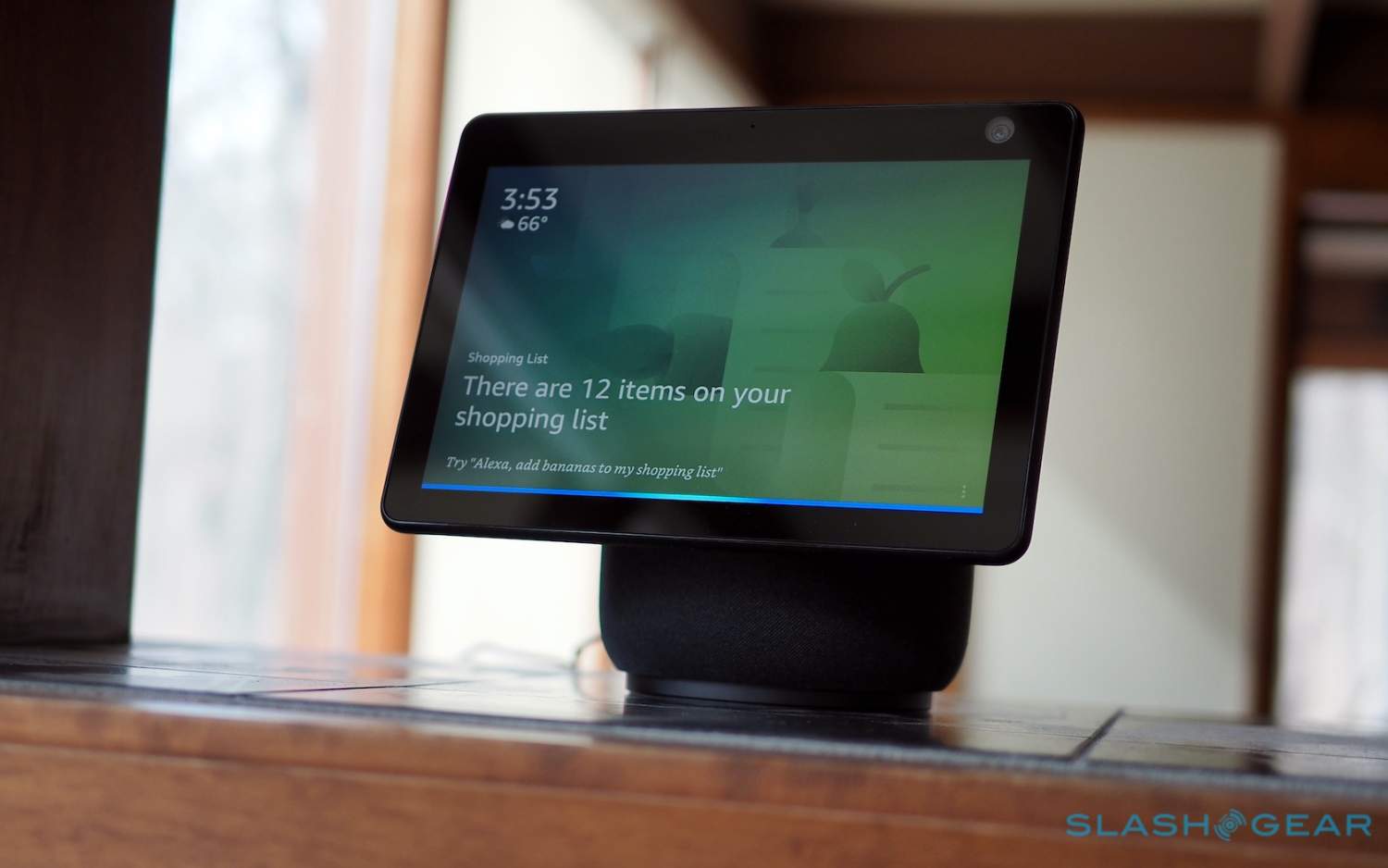 One annoyance then becomes the cable. In moving the Echo Show 10 out far enough to give it enough room to spin, and to maximize the usefulness of that, I was left with a cable stretching across. Meanwhile, though the base swivels automatically, the screen tilt is adjusted manually. If you’re on a video call, Amazon uses digital cropping to keep your face centered.

The tracking uses a combination of the camera and the microphone array to figure out where you are, and that processing takes place on-device. If you close the camera shutter – or ask Alexa to turn it off – the Echo Show 10 will stop following you. Alexa commands, of course, are processed in the cloud. 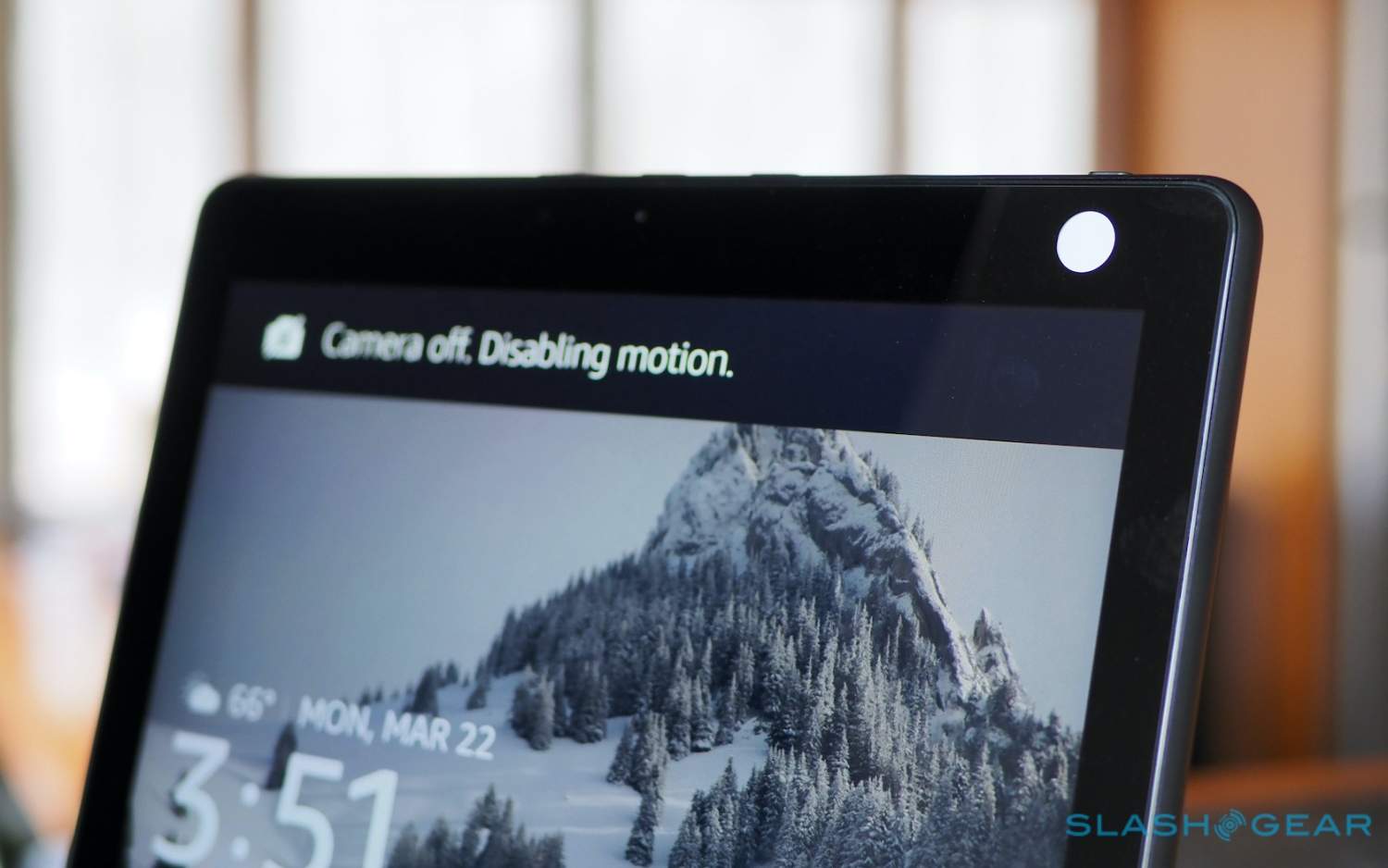 There’s something oddly charming about the motion, at least during the honeymoon period. Call out “Alexa,” and if the screen is facing away from you it’ll twist around, as though you’ve shouted out to a friend who you spot in the distance. You don’t, of course, need to wait until the screen is pointed your way to actual ask a question or issue a command, though I found I tended to. That can actually be a problem, since occasionally the display would zip further around than it actually needed to, and wait for me to say something else before refining its positioning.

In terms of what the screen will actually show, that hasn’t really changed much compared to the old Echo Show 10. Ask Alexa for a weather report and she’ll read you the highlights while displaying a forecast for the next few days-on screen; you get album art and controls during music playback, and of course recipe ingredients and steps for when the assistant is helping you cook. 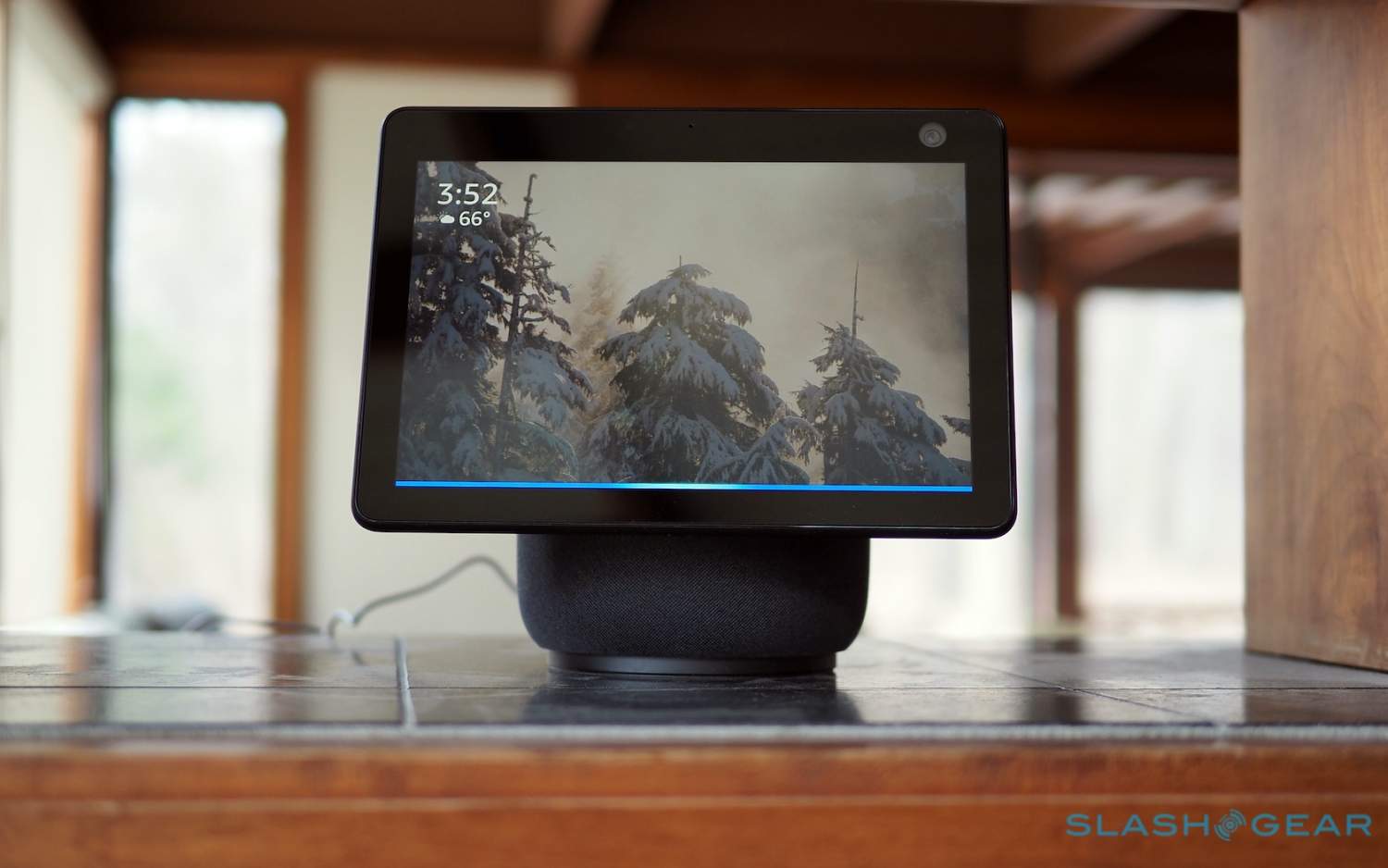 As for media, along with Amazon Prime Video there’s also Netflix and Hulu; YouTube access is a bit of a fudge, relying on voice commands to control the streaming platform in a basic version of the Firefox browser. For music, you can use Amazon Music, Spotify, or Apple Music. I suppose I can see that having the screen turn to keep facing you as you’re streaming your favorite Netflix show could be nice, but I did find myself wishing Amazon had added an anti-reflective coating to the display at the same time. Often the Echo Show 10 would turn and promptly find a spot full of glare from my overhead lights.

What I was really keen to see how the tracking on the smart display might improve video calls. You can use Alexa video calling, Amazon’s own service, or Skype; Zoom support is on the roadmap, but not available yet. 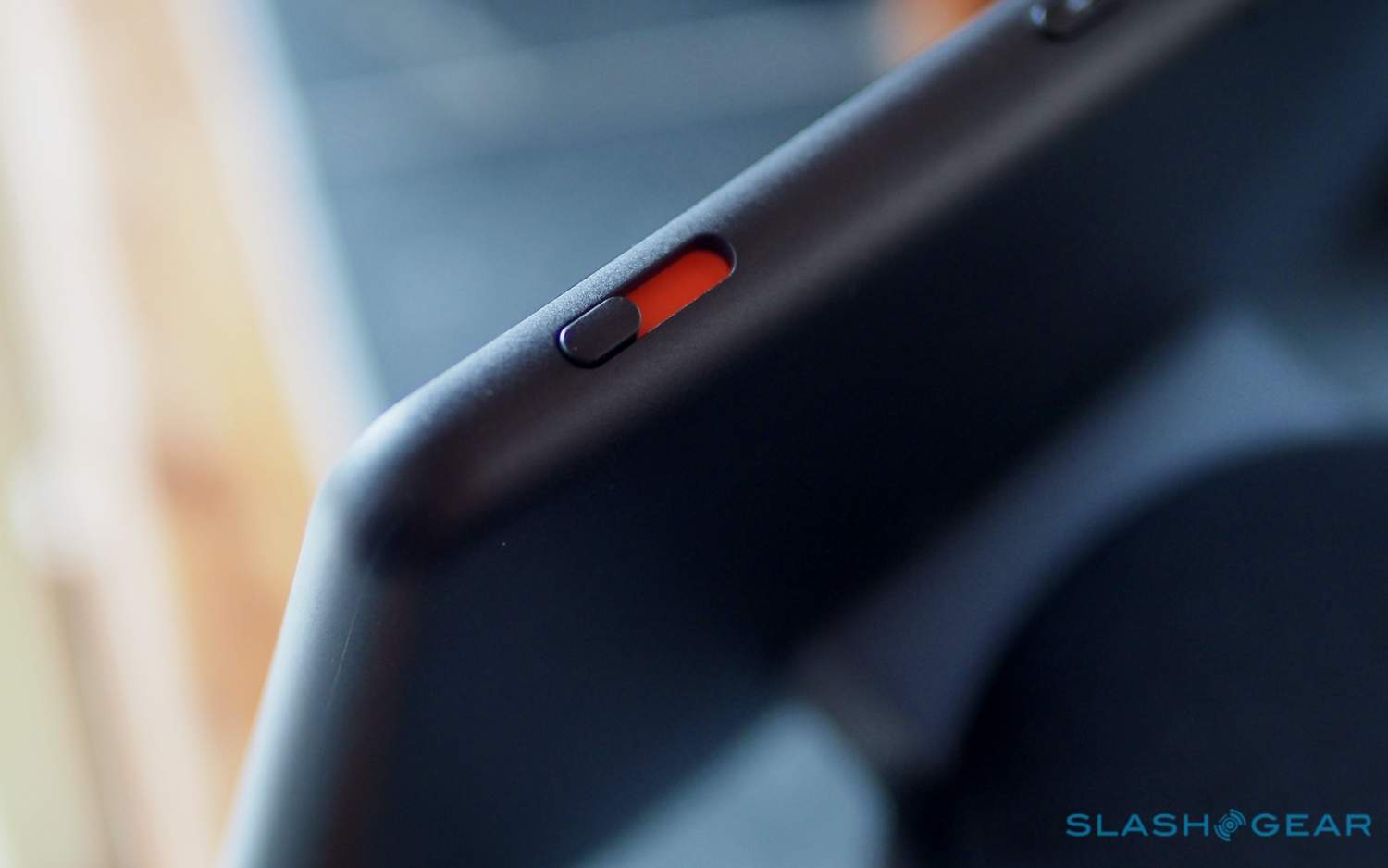 I spend a lot of time on video calls these days, and I suspect you do too. What I was hoping was that I could transition a lot of them to the Echo Show 10, tapping its tracking so as to be able to move around more – and hopefully avoid “Zoom burnout” in the process – and save my laptop screen for something else. 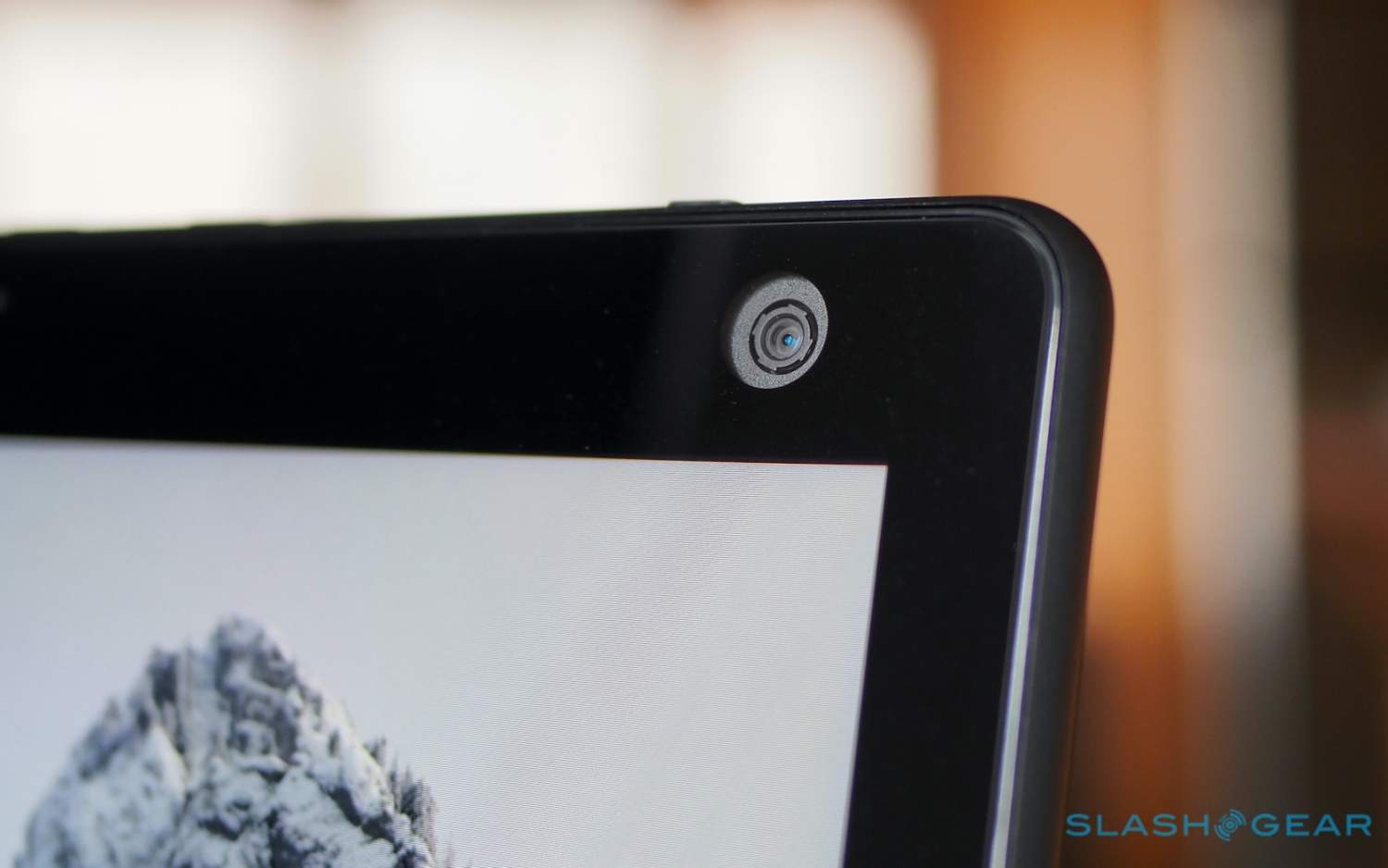 You can get somewhere close to that, in practice. The Echo Show 10 has Bluetooth, which supports not only streaming to its speakers from your phone or other source, but from the smart display to headphones. That meant I could hold video calls without everyone else hearing the call. You can’t use the microphone on your headphones, though, only the array on the display itself.

Unfortunately, given the number of video calling platforms out there right now, finding a time when I could offload that to the Echo Show 10 was fairly rare. It left me wishing I could use Alexa Cast to shift the video from my laptop screen to the smart display instead, since the tracking works unexpectedly well. 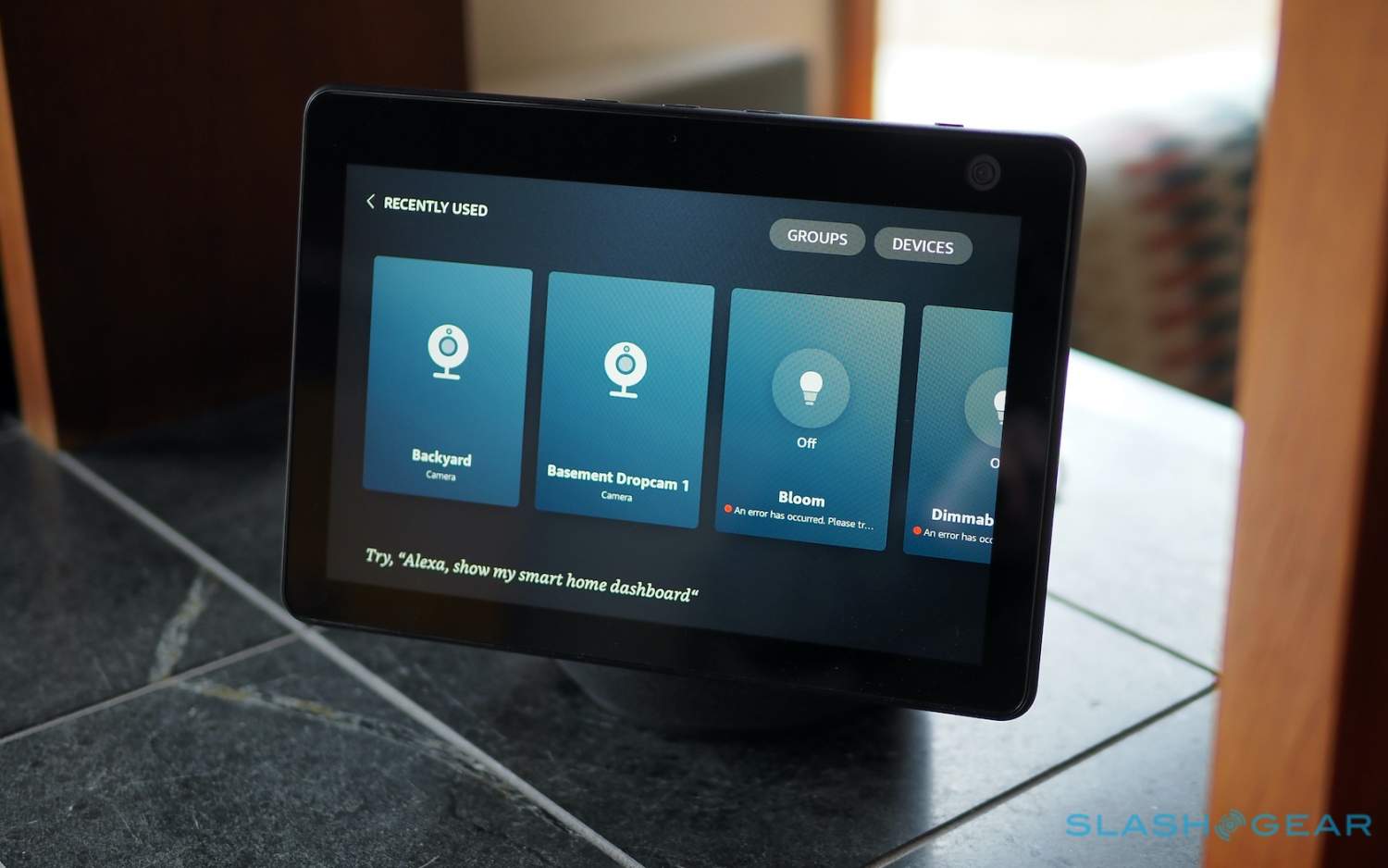 As with other Echo models, you can use the Echo Show 10 as a smart home hub. As well as WiFi 802.11ac there’s both Zigbee and Sidewalk support, the latter being Amazon’s fairly controversial networking standard. It’s optional to turn on as you first set the smart display up, and you can enable or disable it in the settings later if you change your mind. 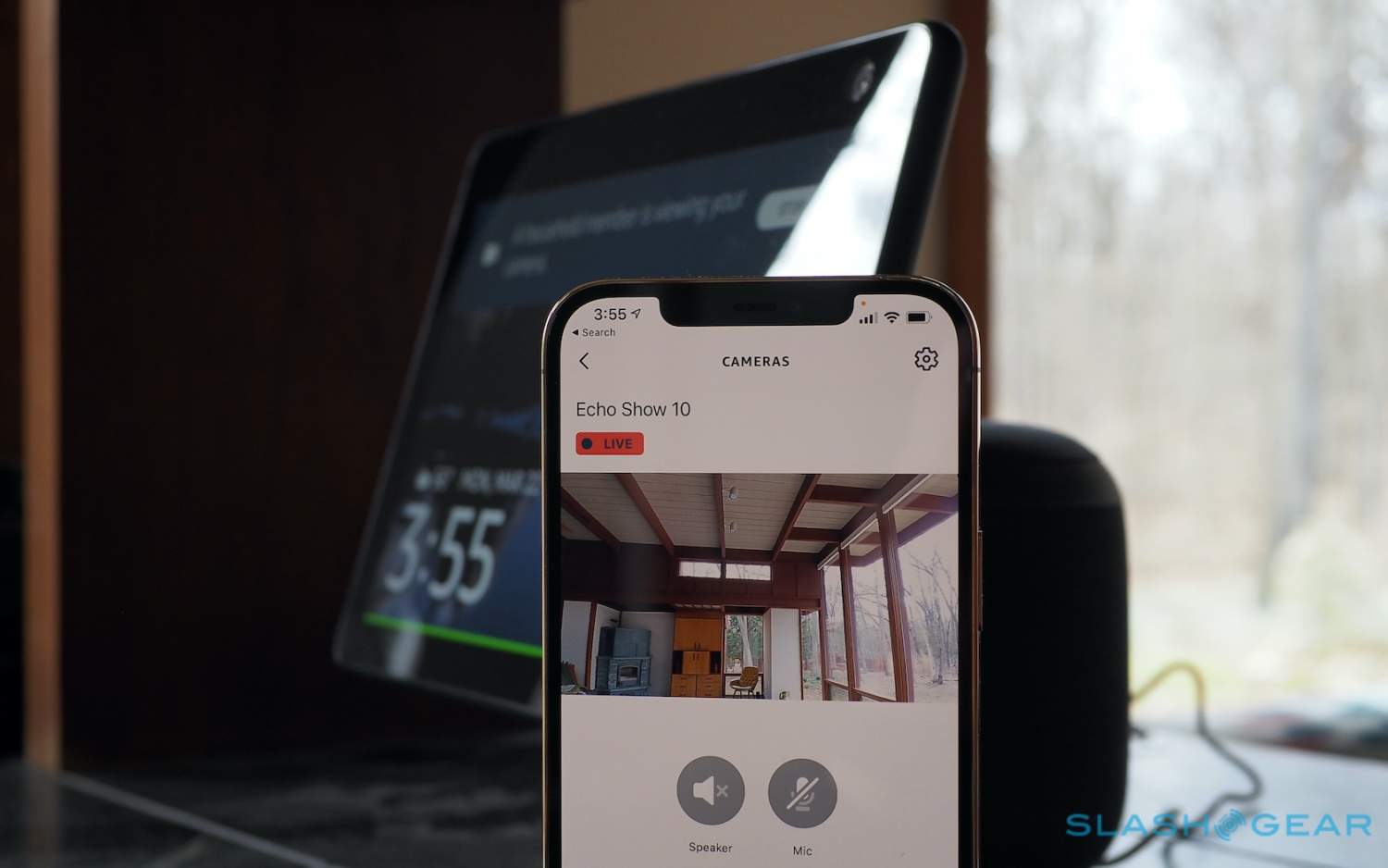 Using the free Alexa app, meanwhile, you can turn the Echo Show 10 into a security camera. That allows you to rotate it to see around the room, which I found could be a little tricky to control. A big warning shows on the screen while you’re doing it, so that whoever is in the room knows they’re potentially being watched, and closing the camera shutter disables the feature altogether. Alexa Guard promises to listen out for the sound of glass breaking, or smoke alarms sounding, and ping you with alerts for that. 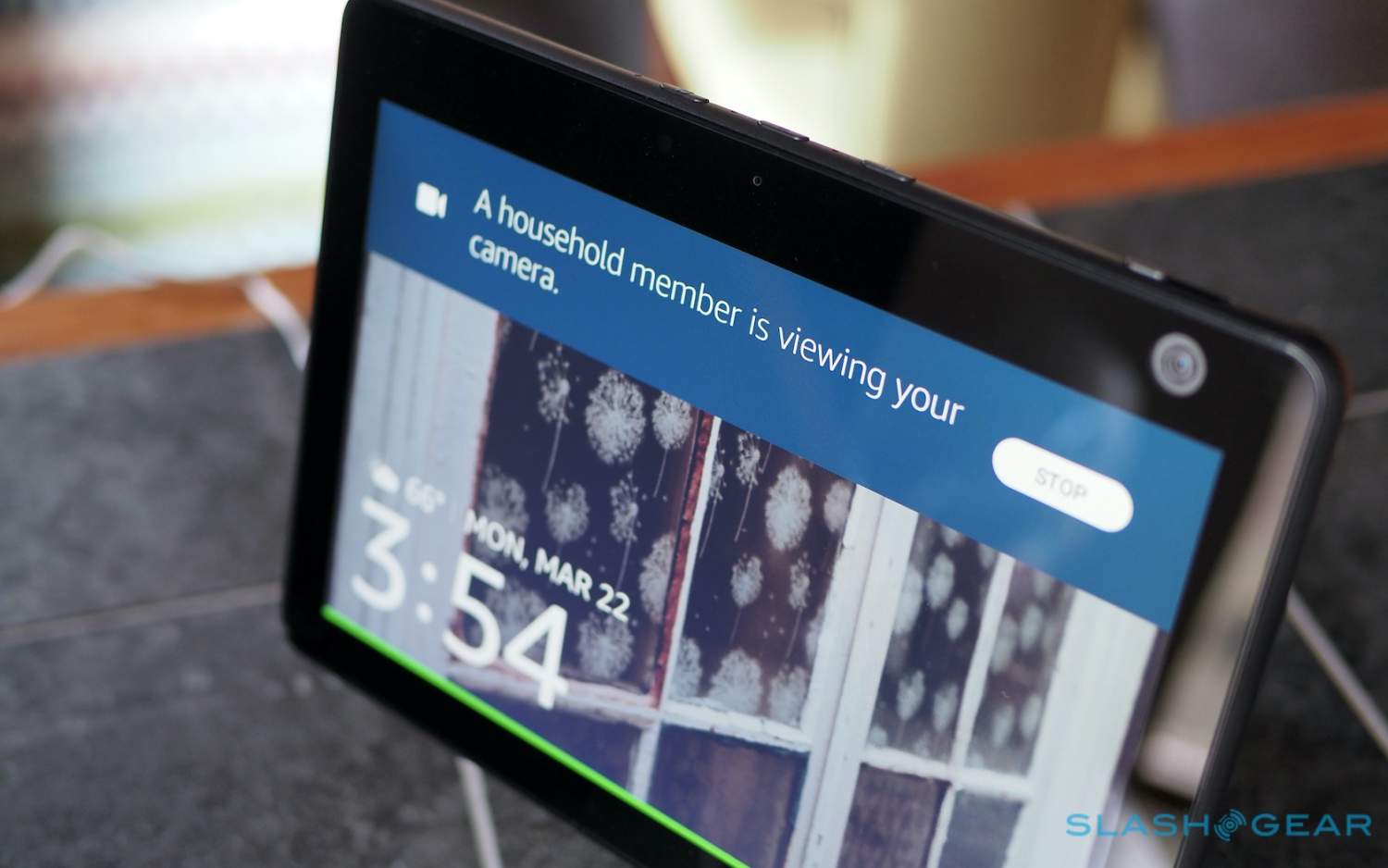 There are some compromises for the swivel action. I suspect some will miss the 3.5mm line-in/out port that other Echo models offer, and then of course there’s the price. At $249.99 it’s the most expensive smart display Amazon offers. I can’t help but feel that some people might be better off just buying two Echo Show 8 – currently available for under $100 apiece – and arguably getting even more flexibility with their positioning.

On a purely geeky basis, there’s something fun about the Echo Show 10. The average home isn’t short on screens, but screens that move are still a rarity. Seeing the smart display spin around to face you only makes it easier to anthropomorphize Alexa. 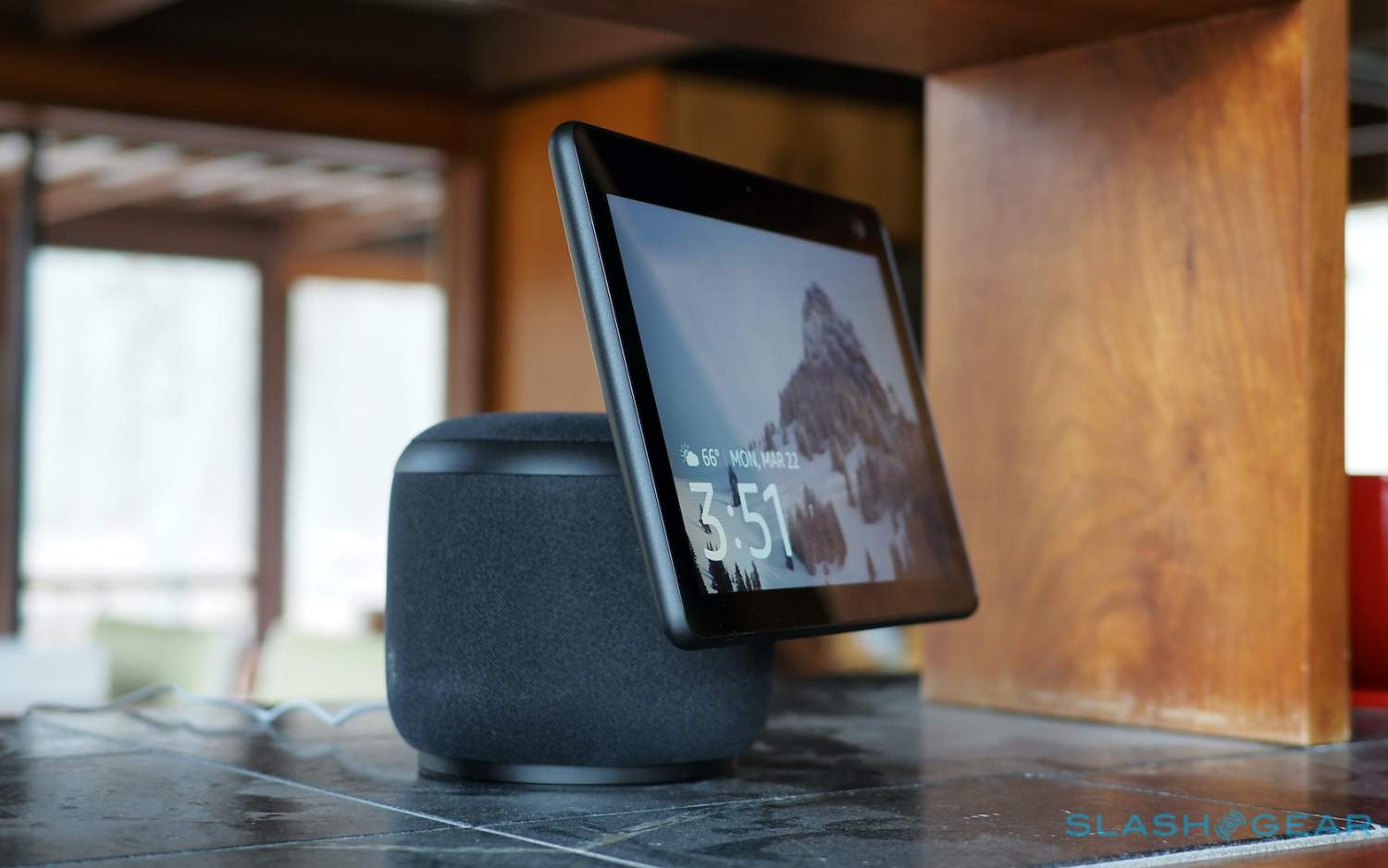 Just how much it actually improves the day to day experience, though, is a little less clean-cut. I still find Alexa’s functionality is best considered audio-first: on that front, the ability to always see the screen doesn’t really make that much of a difference. For video streaming and video calls there’s definitely potential, but I feel like the Echo Show 10 needs more apps, and to support more services, before that’s a killer use-case.

If you’re a big user of Amazon video calls, I could definitely see the pivoting screen being a bonus. Families whose kids love chatting with Alexa are probably only going to find the Echo Show 10 more engaging too, now that motion is added to the mix. For the rest of us, though, it’s a $250 reminder of where Amazon’s smart assistant strengths really lie, and though movement is clever, the reality is that you get the bulk of the functionality through its far more affordable models.