As lockdown gradually lifts, the active noise cancelling earbuds which have made working from home more bearable are about to get a taste of the outside world. Amazon’s new Echo Buds (2nd Gen) arrive just in time for that, pitching not only true wireless audio but hands-free Alexa and ANC with a head-turning $129.99 price tag.

That was an aggressive price when the first-gen Echo Buds launched in 2019, and it’s still compelling now. ANC – which uses microphones and software trickery to isolate you from a lot of real-world sounds – has proliferated in the headphone and earbud market over the past couple of years, but it’s still typically a premium feature. There, then, Amazon bucks the trend. 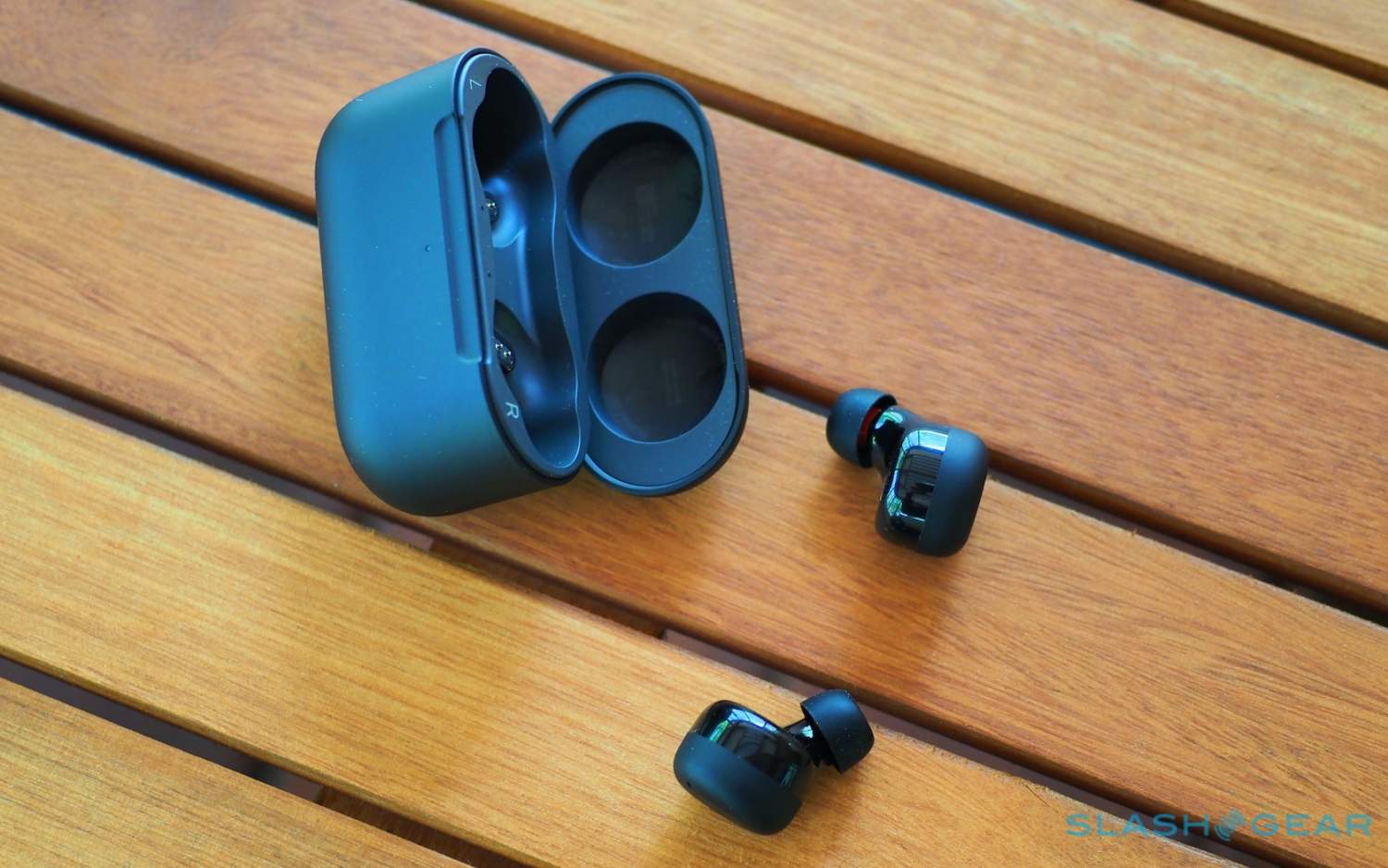 Some of the changes between the generations are mainly practical. The case is less bulky now, and the earbuds themselves are slightly smaller along with being IPX4 water resistant. Rather than the case flapping open like a powder compact, like before, it has the same floss-dispenser shape as most other wireless earbuds have adopted. It’s a little easier to flip open one-handed as a result.

Amazon includes four sizes of ear tips, and two sizes of wing tips, in the box. They’re all interchangeable, which I liked, as I often struggle with getting wireless earbuds to stick in my ear canals. It means you can pair whichever wing tips suit your outer-ears with the snuggest-fitting inner-tips. The Amazon “smile” on the outer face of each earbud makes it easier to figure out at which orientation to slot them in, too. 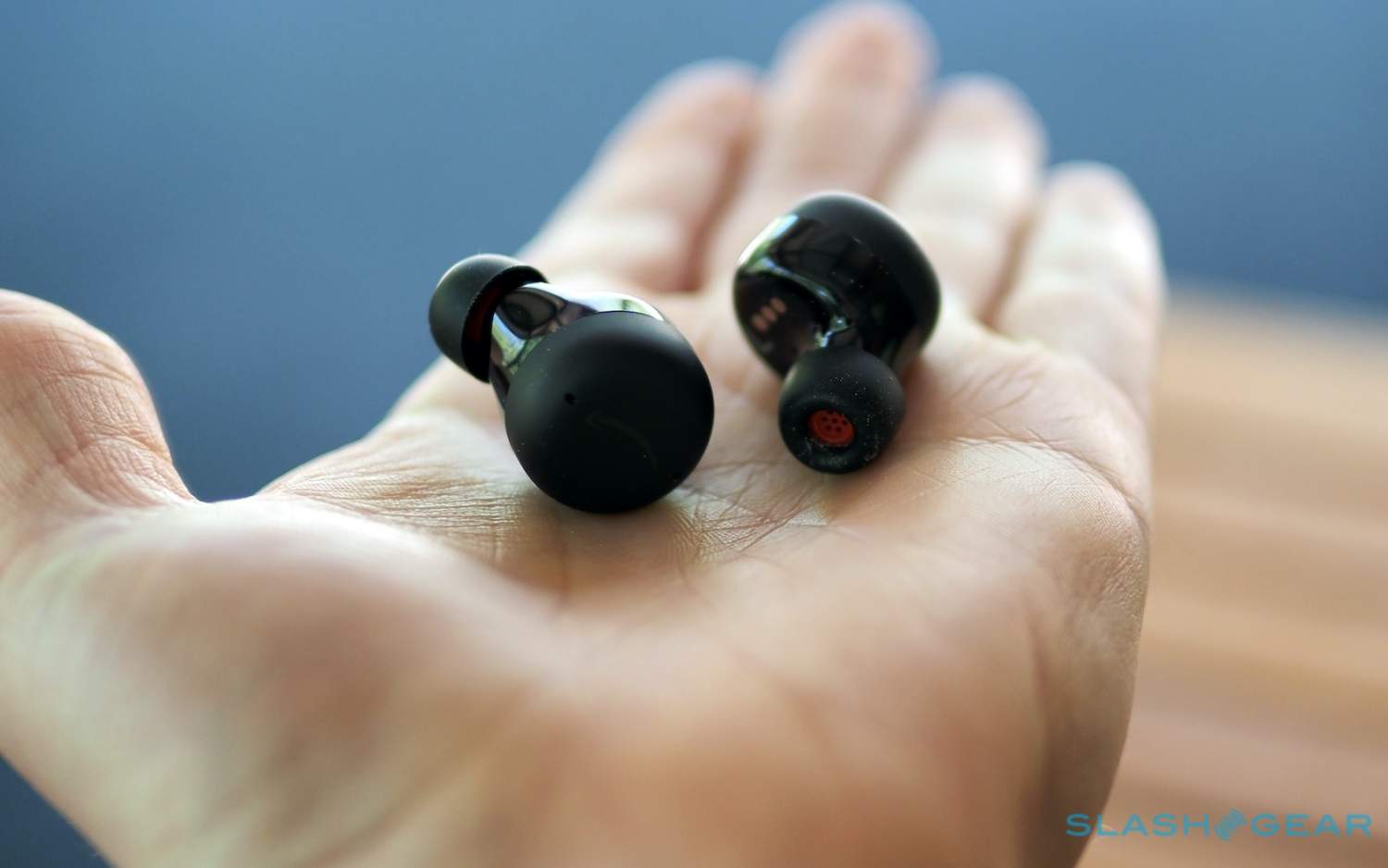 You pair the earbuds via the Alexa app, available for iOS and Android, and as part of that process there’s an ear-fit test which uses audio and microphones inside and outside of each bud to check the seal. As with any active noise cancelling earbud, it’s important to get that part right as otherwise the isolation tech won’t be as effective.

The setup process also guides you through using Alexa, too, including setting up a voice profile so Amazon’s assistant can differentiate how you sound compared to other people. By default, Alexa is always-on, and listening out for the wake word just like an Echo smart speaker would be. 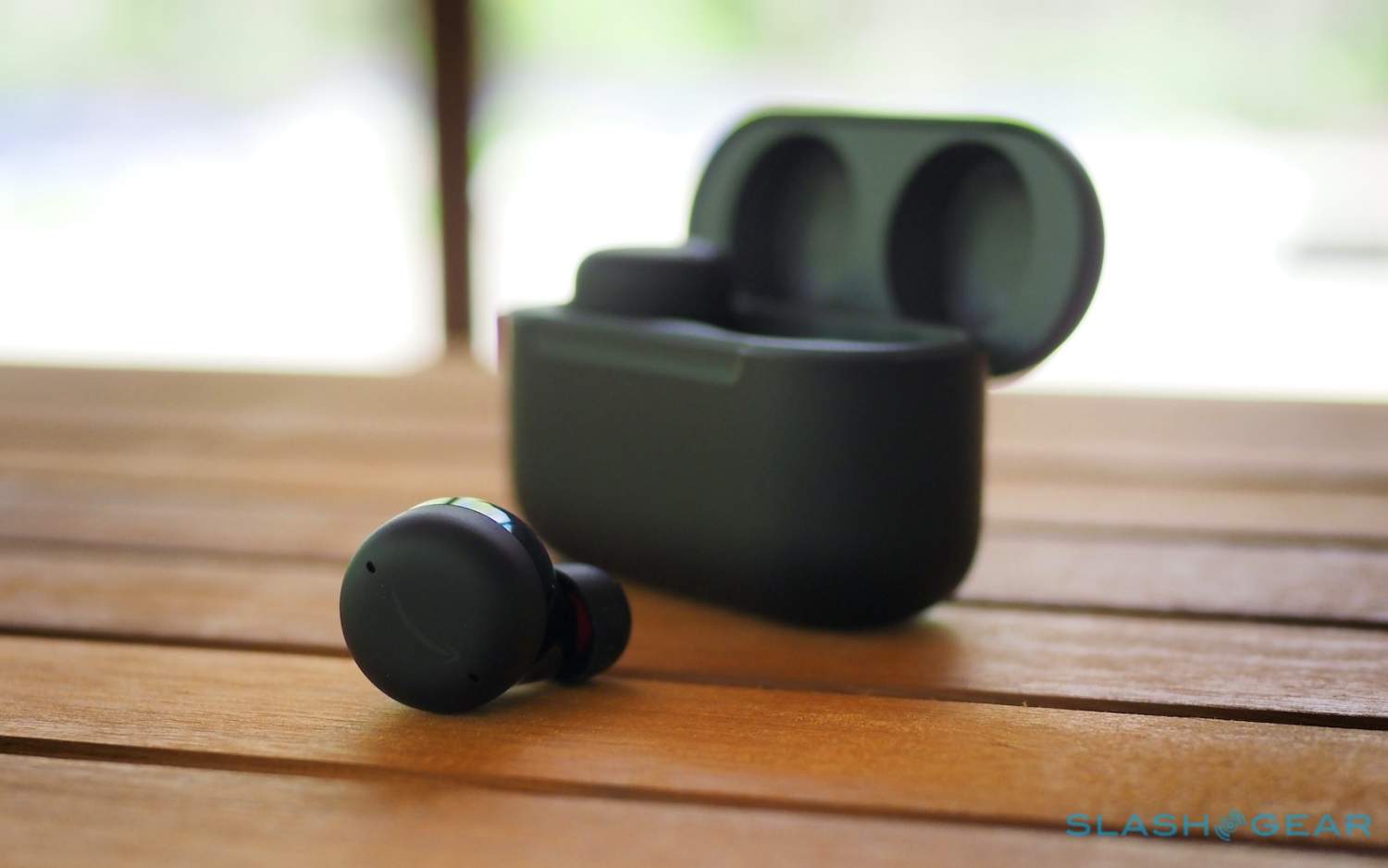 Once that’s done, in fact, the overall experience is like walking around with one of those speakers on your shoulder. You can get weather reports and news updates, play podcasts, ask for tracks from Amazon Music, and control the smart home devices that are registered in the Alexa app. There are Echo Buds-specific commands, too, like asking what the battery level is or requesting directions to places. Then, using the GPS in your phone, Alexa will whisper navigation instructions to you. If you lose one, you can sau “Alexa, find my buds” to any smart speaker to locate them via an audible chime.

How useful all that is will depend on how much you rely on Amazon’s assistant day to day. If you’re used to spending much of your work day with earbuds in at this point, then being able to quickly get conversions, facts, and issue smart home commands can be very useful. You can also use voice commands to initiate or answer calls, and later in the year there’ll be VIP Filter support so that notifications from only whitelisted apps make it through. 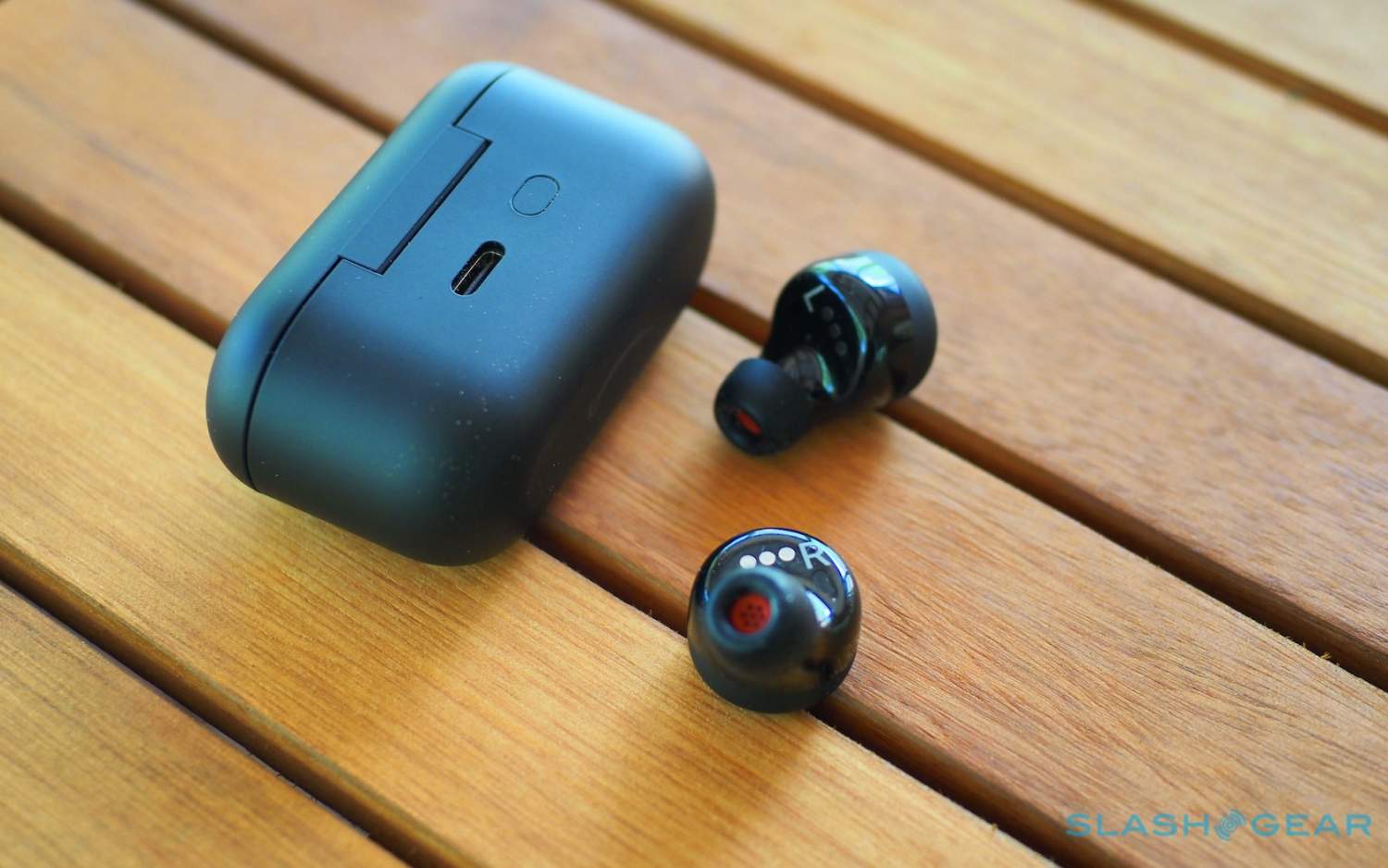 As with the first-gen Echo Buds, the big pitch here is how affordable Amazon makes active noise cancellation. That’s arguably become a must-have in wireless earbuds, but still tends to carry a premium price tag. For this second-gen set, Amazon says its ANC is now twice as effective.

It’s enabled by default, and it works solidly, even if it’s not quite the most effective system I’ve tried. I still think Apple’s AirPods Pro and Sony’s WF-1000XM3 earbuds edge ahead of Amazon’s Echo Buds in terms of overall isolation, but they’re significantly more expensive, too. 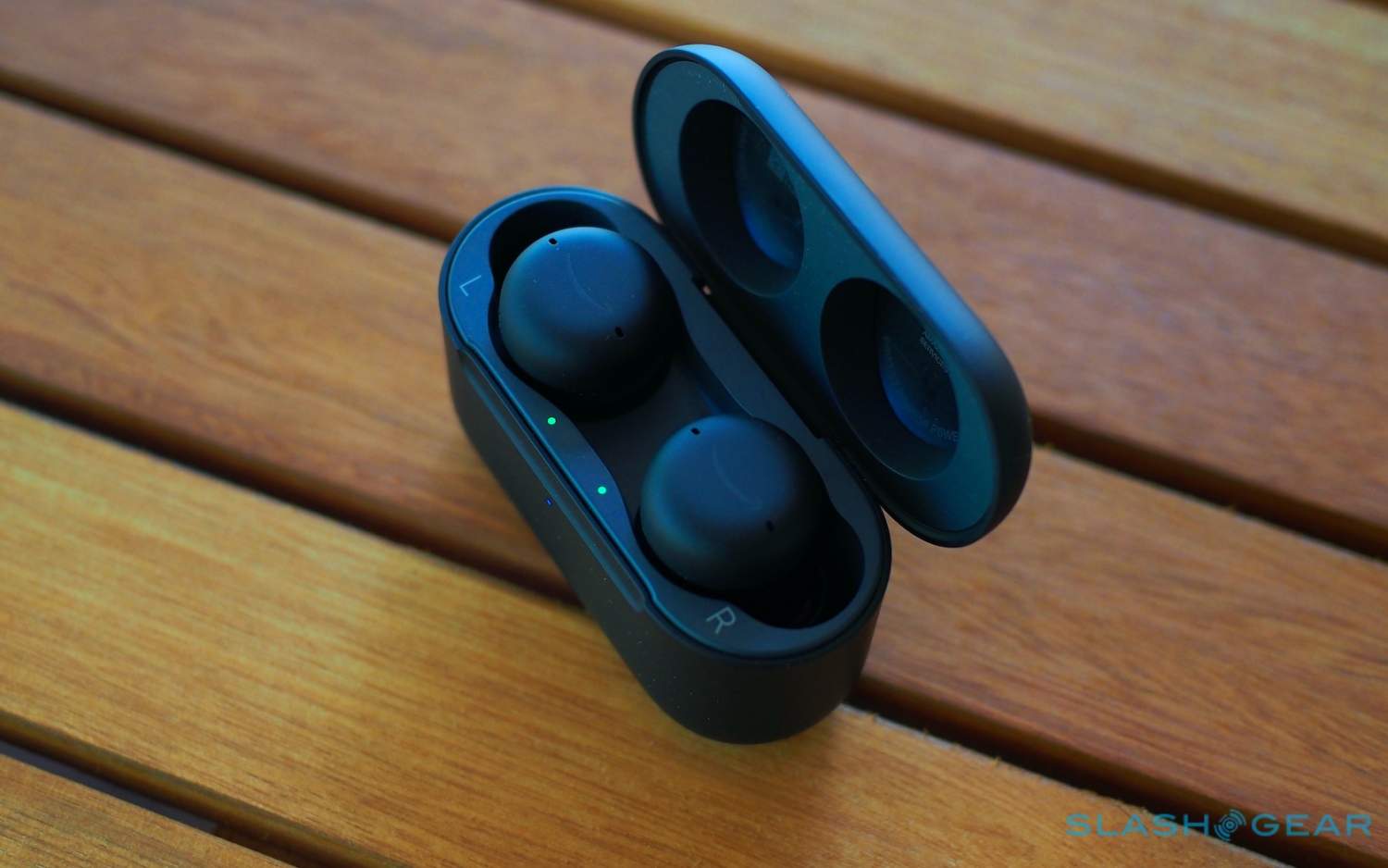 You can toggle between ANC mode and transparency mode – where some external noise is piped through so that you can hold a conversation or hear traffic – by long-pressing the touch pad on either earbud. Or, you can ask Alexa to do it, though I did find occasionally that I’d have to unlock my phone first before it would do that. Amazon’s pass-through audio sounds a little crunchier than on rival ANC systems, I thought, with more noticeable background hiss.

For music, meanwhile, Amazon’s new 5.7mm drivers are billed as adding bass and treble in this generation, which is often where more affordable earbuds fall short. Billy Eilish’s “bury a friend,” my go-to for a low-end shakeout, suggests you should keep your expectations in perspective nonetheless. The new Echo Buds are balanced – there’s no outlandish skew to either the top or bottom end – but even with the bass cranked up in the Alexa app’s EQ settings it’s more of a gurgle than a slug. 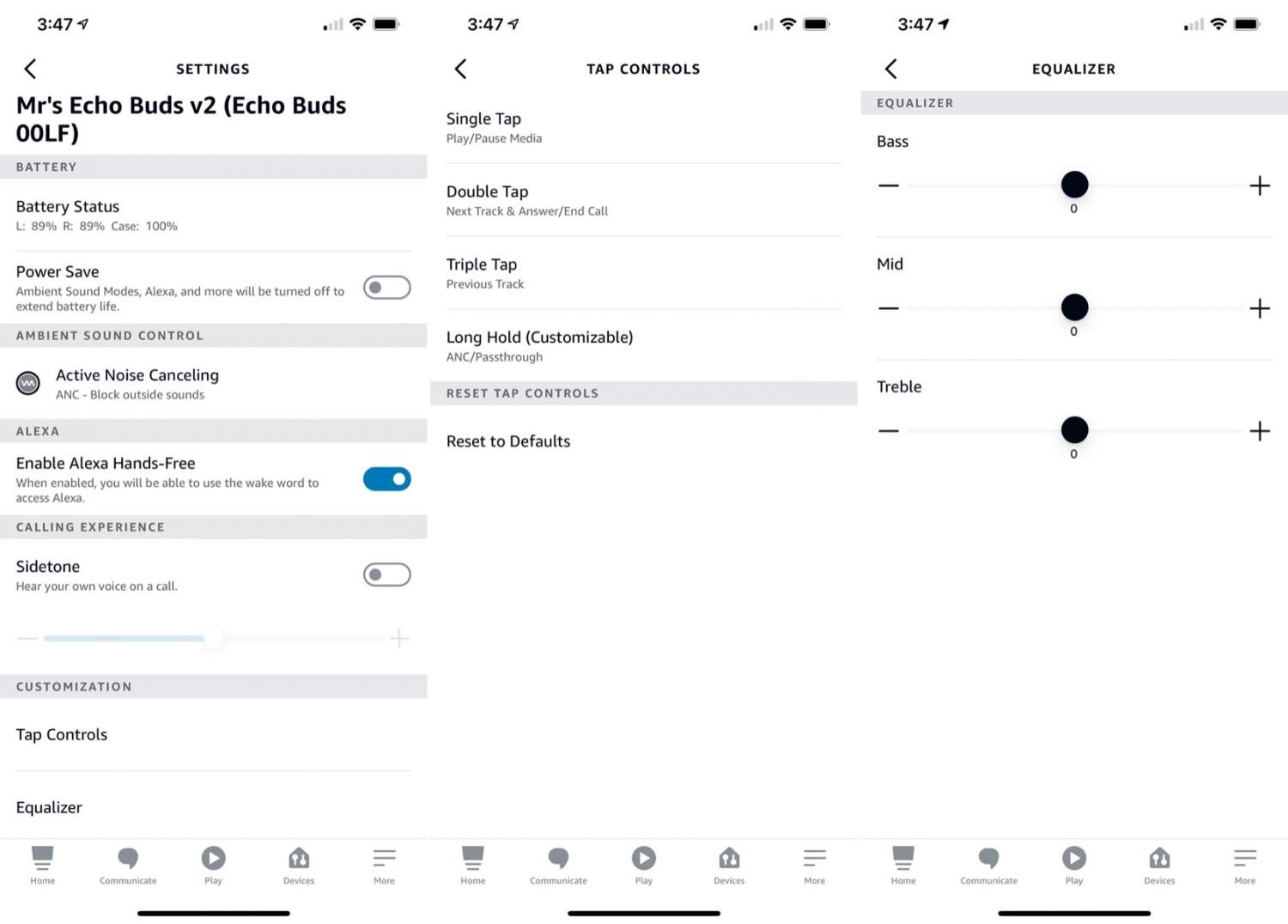 Pop an earbud out mid-listen, and the music will pause until you put it back in. They’ll also work in mono mode. A single tap on either earbud toggles play/pause manually, a double-tap skips forward, and a triple-tap skips back. You can reprogram the long-press from ANC/passthrough, to volume up or down, manually triggering Alexa, muting/unmuting the microphone, or summoning Siri or the Google Assistant on your phone. It’s also possible to set a different long-press shortcut for each earbud.

$99.99 gets you the new Echo Buds and a regular case, which recharges with a USB-C port on the back. Like Apple does, however, Amazon also has a version with a wireless charging case. Then, you spend $129.99 – just like the first-generation Echo Buds – but get the choice of USB-C or Qi wireless charging. 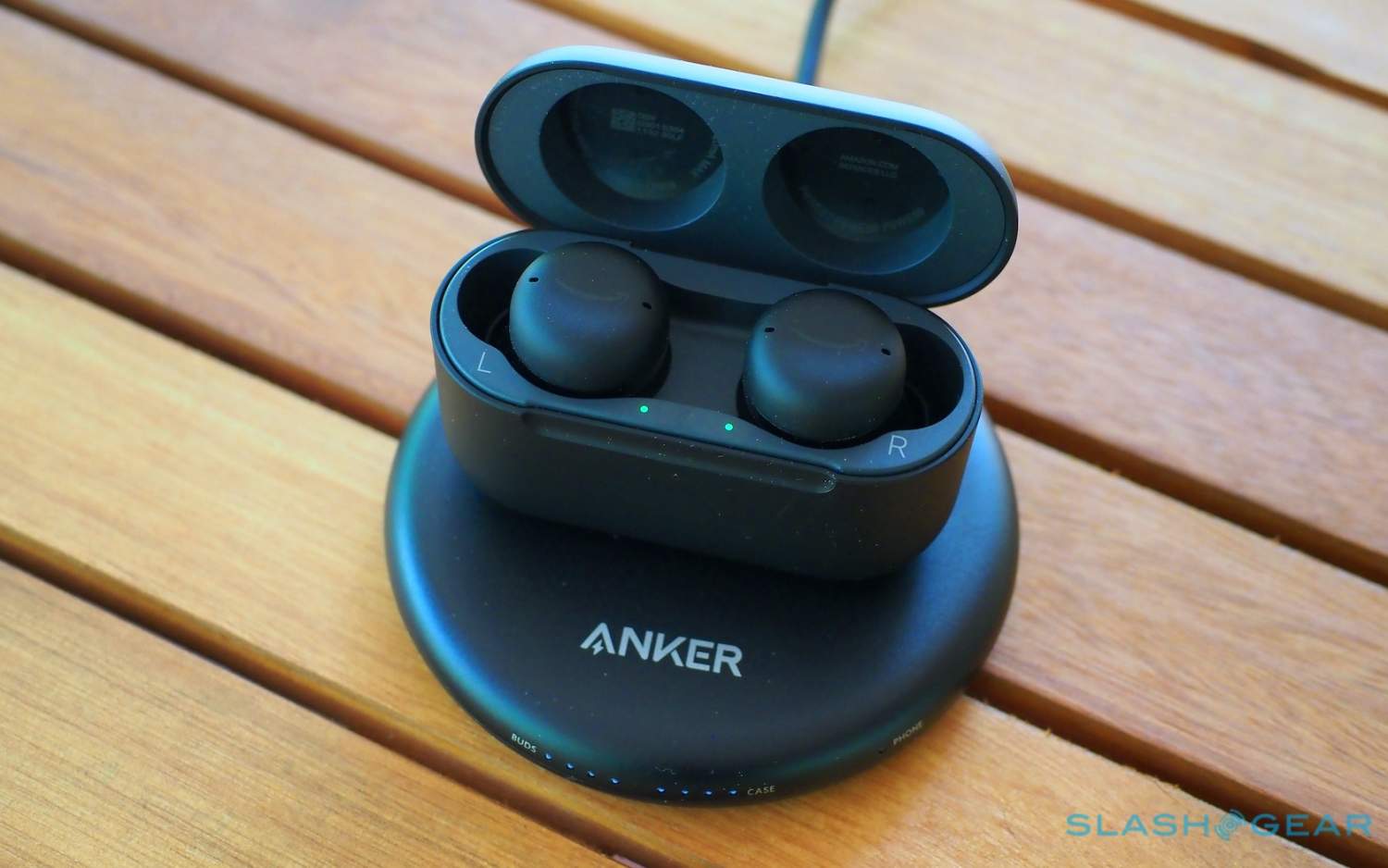 Amazon has also worked with Anker on a PowerWave Wireless Charging Pad for the new Echo Buds. It’s $17.99, and has a recess in its top so that the earbuds’ case stands upright in the perfect spot. However that doesn’t stop it from charging other devices, like phones, laid flat on top as normal.

On the plus side, the charging pad has a row of LEDs along the front to show the current battery status of both the case and the earbuds: four lights for each. Another LED lights up if it’s another device, like a phone, that’s charging. The downside is that the pad can only supply 5W at best, no great hardship for the Echo Buds but short of what most modern phones can handle. 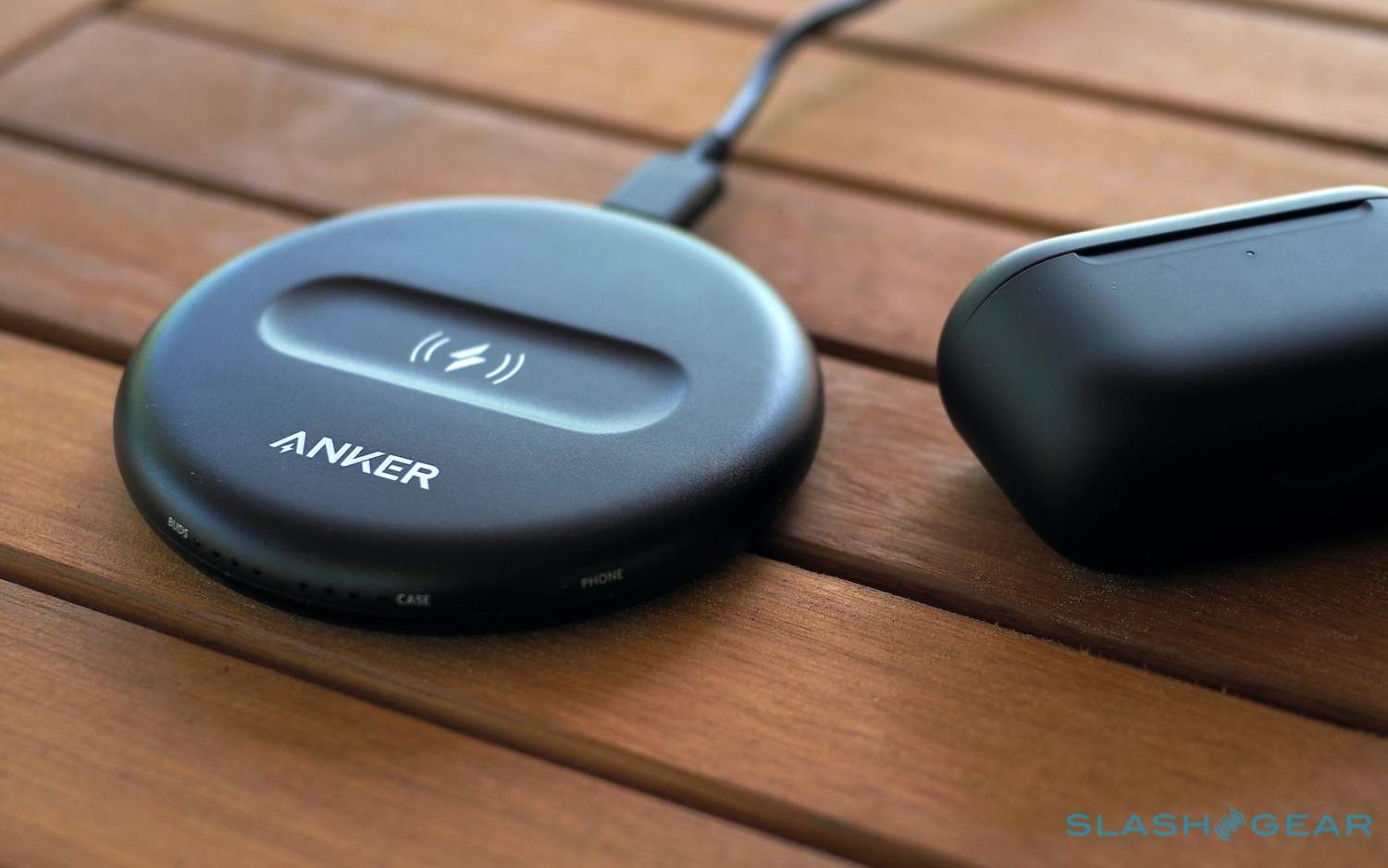 If you can sacrifice hands-free Alexa and ANC, meanwhile, you can stretch each earbud out to 6.5 hours. With the case contributing its charge, then, you’re looking at just shy of 20 hours maximum use.

Amazon’s pitch with the Echo Buds, beyond the affordability of its ANC and competitive battery life, is the idea of living in a bubble of Alexa-powered convenience. It’s something I think will resonate with those who have gone all-in with Amazon’s assistant. While Alexa can’t read your mind, you can hold quieter conversations with the Echo Buds than you do with an Echo speaker, and the responses are for your ears only. 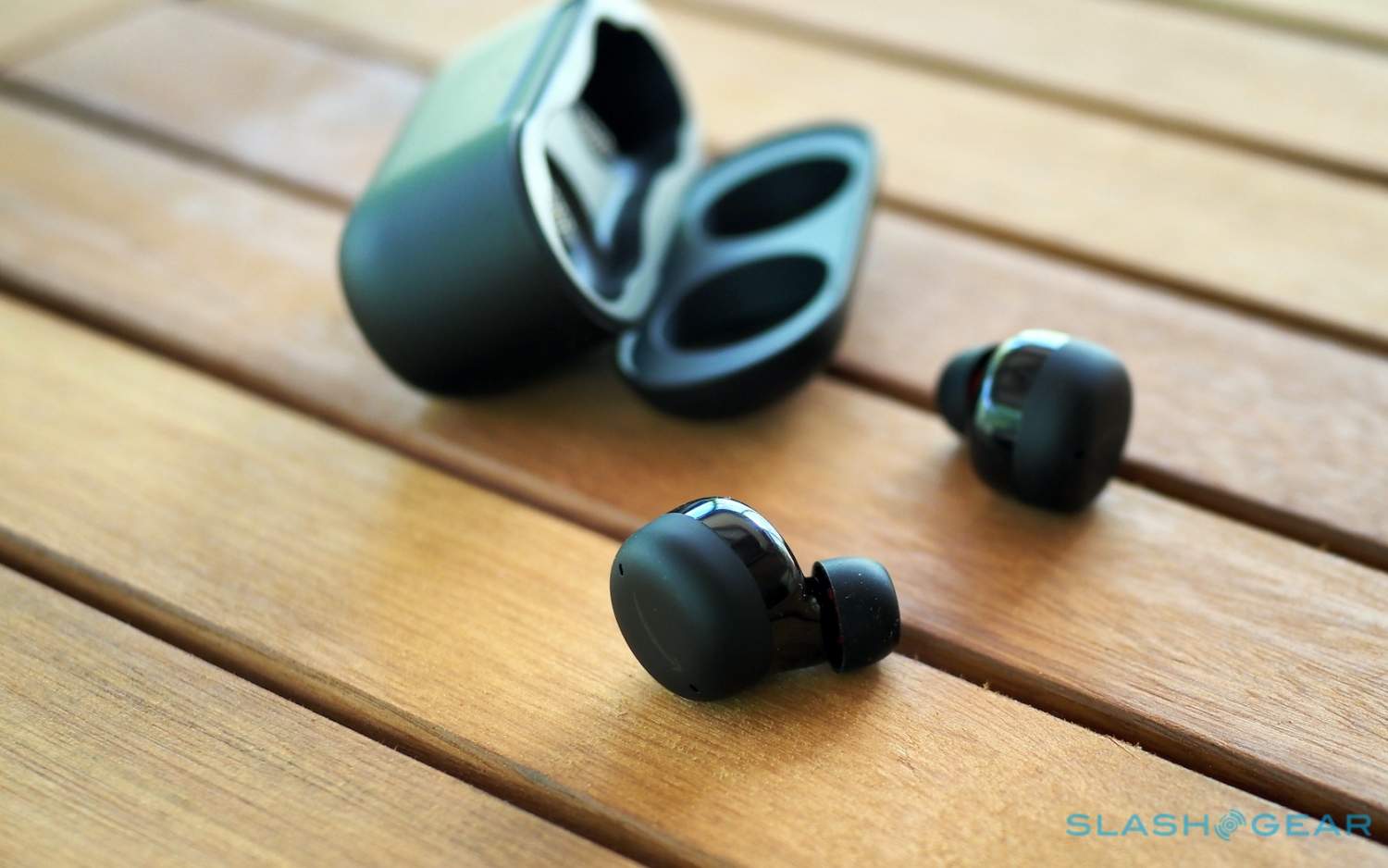 I found that actually made me use Alexa more, because it felt more conversational and less like I was interacting with an appliance. On the flip side, though, if you’re not an Alexa user then there’s better ANC out there – albeit often at a slight price premium – and the Echo Buds are solid, not outstanding, when it comes to music playback.

How important all that is will probably depend on whether you see earbuds as a music accessory or a broader wearable. Those who just want maximum audio quality may want to look elsewhere, but if you’re going to make good use of the hands-free Alexa features then Amazon’s new Echo Buds (2nd Gen) pair that with aggressive pricing and convenience.