Now that The Amazing Spider-Man is out for all to see, it’s time to talk about the gadgets and software you’ll be seeing when you decide to head to the theater this weekend. Of course if you live up here in Minnesota, you’ll be considering going to the movies this whole week just to get out of the heat – that just makes good sense. What doesn’t make a whole heck of a lot of sense to those viewers of The Amazing Spider-Man is the choices Peter Parker makes in the film in regards to both software and hardware.

This film is made by Sony Pictures (who of course associates with Sony’s many other arms) and the storyline is set in present-day New York City, so it’s not too much of a stretch to think that Peter Parker would be using the smartphone he wields throughout the film – a Sony Xperia something-or-other. With only a couple of glimpses of the device’s back panel throughout the film and a couple of backwards swipes on the screen (Andrew Garfield surely knows that it’s a swipe from right to left to mute a call from Uncle Ben – left to right would answer!)

The image above comes from a pre-release advertisement for the less-than-well-received Xperia ION which got it’s own Spider-Man themed commercial.

On the other hand, it’s strange that Peter Parker would pick up a device whose maker hasn’t done especially well in the hacker universe when he’s got several Google Nexus devices – or heck, even an iPhone – out there instead. To be fair though, cash flow is never really brought up in the film. 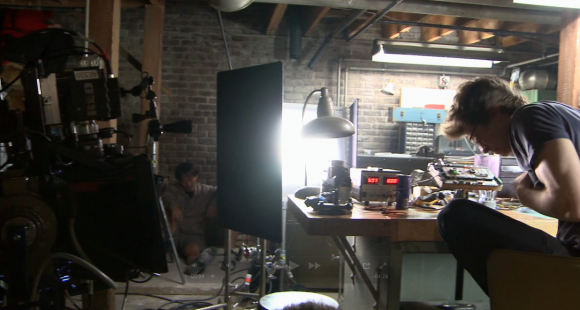 Then there’s Bing. Peter Parker uses Bing as a search engine. This isn’t the first time you’ll see this notion if you’re a prolific reader of Reddit, but I must say it again: I’m willing to suspend some level of belief since this is a super-hero action film, but come on. There’s no way a skateboarding super-smart young adult scientist like Peter Parker would use Bing unless he had to.

But of course he did have to. Google is not allowed in this Spider-Man movie save for the software that runs under the face of the Sony phone – that’s it!

Other than that, there’s a collection of really radical bits of machinery here and there that’s based in the Marvel Comics universe, of course, and Parker’s home-made web-shooters (which you can hear more about in our full Andrew Garfield interview).

Behind the scenes they’re using RED cameras and 3ality Technica rigs for 3D too – you can hear about those in our interviews with Dennis Leary and Emma Stone.

And stay tuned for more Amazing Spider-Man action coming up as well – more interviews and features coming up for this film that’s in theaters now!