A set of duck-billed dinosaur bones has been found in an environment where it’d never previously been discovered. All the way up in Northern Alaska, at Colville River, at a site called the Prince Creek Formation. “The finding of dinosaurs this far north challenges everything we thought about a dinosaur’s physiology,” said Florida State University professor of biological science Greg Erickson and his colleagues. “It creates this natural question. How did they survive up here?” Also, is this the same Hadrosaur we already know and love?

One of the several bits of data that’s odd about this study is the relatively immature state of the bones these researchers are working with. This was a challenge, as not many “fully mature” bones could be found. As part of the study, these researchers demonstrated how they can use “immature” bits and pieces to reconstruct useful data.

ABOVE: Illustration by James Havens via Havens Studio.

They use these bones in a way not all that unlike Jurassic Park’s imagined scientists used the missing parts from other, extremely similar species to construct a full set of information: “In this study, we… demonstrate that skeletally immature specimens can be reliably used in addressing taxonomic problems within Hadrosauridae based on a detailed understanding of the growth patterns of closely related taxa.”

Through their study, these researchers have found that the specimens they’re working with, from a dinosaur they’ve named Ugrunaaluk kuukpikensis, do no represent a juvenile form of either of the previously-identified species of Edmontosaurus. 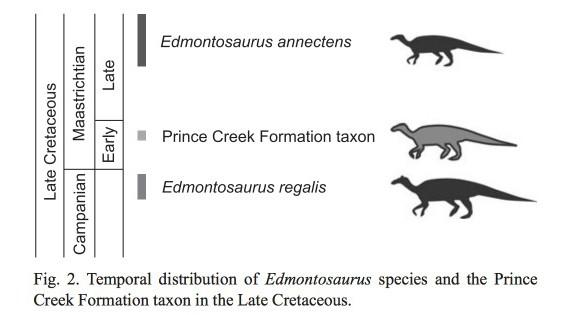 This is a brand new species, similar – but not the same – as the Edmonotosaurus species previously known.

This creature shows part of an ecological puzzle, “[contributing] to a growing body of evidence that the paleo-Arctic hosted a distinct and endemic polar, early Maastrichtian dinosaurian fauna.”

To learn more about this find, see the paper “A new Arctic hadrosaurid from the Prince Creek Formation (lower Maastrichtian) of northern Alaska” as authored by Hirotsugu Mori, Patrick S Druckenmiller, and Gregory M Erickson. This paper can be found in the scientific journal ACTA Palaeontologica Polonica under code doi:http://dx.doi.org/10.4202/app.00152.2015.