Akai has launched a new Music Production Controller that turns an iPad 2 into a full track producer, the Akai MPC Fly, the latest in a series of docking multimedia add-ons for Apple’s best-selling slate. Officially launched at the NAMM this week, the MPC Fly docks with the second-gen iPad with a double-hinge, allowing it to sit upright, lie flat or clamshell closed for travel, and has sixteen backlit MPC pads and support for the MPC App.

However, most Core MIDI apps for the iPad 2 should work as well, giving you sixteen velocity-sensitive pads with aftertouch along with several dedicated UI buttons: note repeat, transport controls, mute/solo, track select, erase and timing correct. An integrated li-ion battery powers the MPC Fly itself, with pass-through power for charging the tablet when plugged into the mains.

As for the MPC Fly iPad app – which, unlike the controller, will work on both the first- and second-gen iPads – has a four-track mixer, comes preloaded with samples and drums, but can also record external sounds and sequences using either the iPad’s internal microphone or a line-in source. Several effects are offered, including delay and compression, and you can clip sounds from your iPod library with a turntable UI for those demanding retro. Of course, there are Facebook, Twitter and SoundCloud sharing options, since there’s no point doing anything these days if you’re not telling everyone else about it.

Once you’ve finished laying down your phat track, you can export it over to your PC or Mac to pick up in a more complex package. No word on pricing at this stage. 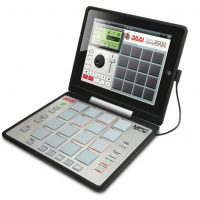 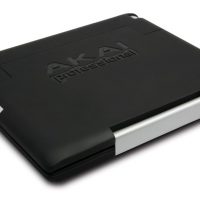 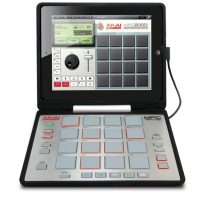 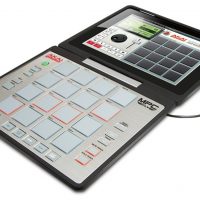