Airport security is changing: These are the new TSA COVID-19 rules

The TSA is changing the way you’ll go through airport security, with screening updates to try to stem the COVID-19 pandemic ahead of an expected uptick in travel over the summer. The US Transportation Security Administration had already adjusted its policies as coronavirus took hold in states across the country; now, it plans to make new changes nationwide by mid-June.

The updated policies vary, but one thing is clear: expect passing through an airport from checking your bags to reaching the gate – and indeed your seat on the plane – to take longer than before. While relatively desolate airports were a common sight early in the pandemic, that’s not something travelers should count on moving forward.

“Individuals who were traveling in the early months of the pandemic became accustomed to arriving at the security checkpoint shortly before their flight departure time,” the TSA notes. “TSA recommends that travelers no longer do so (or arrive well in advance of their flight) since more people are flying and new procedures such as social distancing have been implemented in airports, potentially adding time to the pre-flight experience.”

Masks are recommended in airports

The TSA’s staff are wearing masks at security checkpoints, and the recommendation is that travelers should as well. At some locations, TSA officers are also wearing eye protection and/or clear plastic face shields, at least at some locations.

Officers will continue to change gloves after each pat-down. Passengers should be ready to have to adjust their masks during the screening process. It’s also recommended that they take off belts and put them – along with anything else in their pockets, such as wallets, keys, and phones – into their carry-on bag. Although frequently-touched surfaces like X-ray bins will be regularly cleaned, minimizing contact with them is still a safer idea.

Packing smarter during the COVID-19 pandemic

The big change for packing is being allowed to bring a larger container of hand sanitizer: one, up to 12 ounces in size, per passenger in a carry-on bag. It’ll need to be removed from that bag for screening, however.

It makes sense to check the bags you’re intending to take through security screening carefully before you get there. That’s because the TSA is changing the policies around searching bags that are flagged with items that are suspicious or not permitted through. 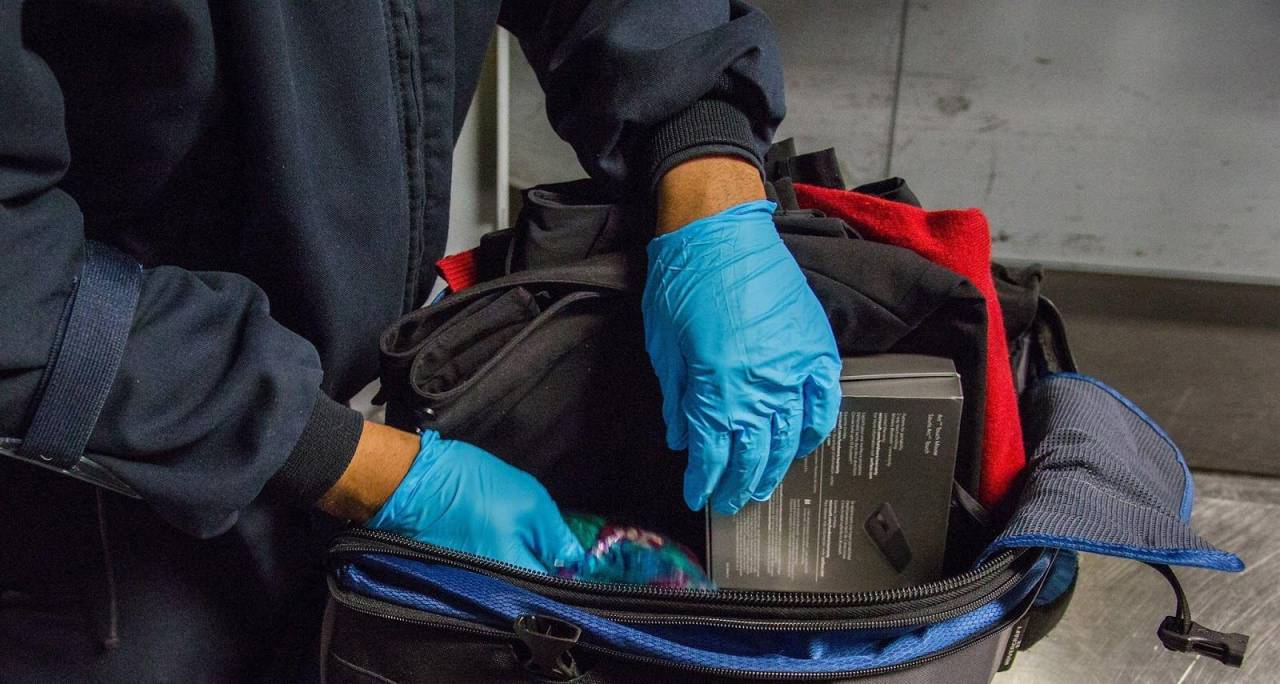 Rather than being taken to a table within the security screening area, and searched by a TSA officer, your bag is more likely to be rejected from the area altogether. The TSA will be directing travelers back outside of security to remove the items, so that they don’t have to touch as many bags or their contents. That includes laptops, liquids, gels, aerosols, and larger electronics. It could mean you end up going back to the end of the line after you retrieve the problem item.

Have your documents ready – but keep hold of them

Just as is the case now, you’ll need to have your boarding pass and documentation ready for a check as you enter screening. The TSA’s new policy, though, is to have each traveler scan their own boarding pass on the reader. Then, you hold it out so that the officer can check it visually, but not have to touch it.

It’s part of a general move to make social distancing more practical. That may include bigger gaps between people in line, having open lanes staggered to leave more space between travelers and TSA officers, and visual reminders of social distancing on the floor.

Food has to come out of your bag now, too

Until now, you’ve been okay to leave food items – as long as they’re not liquids – in your bag. That changes with these new policies. The TSA is expecting people to place carry-on for items into a clear plastic bag, and then put that bag into a bin for X-ray screening.

“Food items often trigger an alarm during the screening process,” the TSA explains, “separating the food from the carry-on bag lessens the likelihood that a TSA officer will need to open the carry-on bag and remove the food items for a closer inspection.” An exception will be TSA Precheck members, who’ll be able to leave their food in their bags as normal.

While travel numbers plunged to record lows in April, that trend has begun to reverse. While there’s still a fraction of the number passing through TSA checkpoints this year compared to 2019 – on May 20, for example, the TSA counted just over 230,000 this year versus over 2,472,000 on the same weekday last year – the changes in policies including the need to separate out travelers more will have an outsized impact on efficiency overall. In short, if you’re planning to fly, budget extra time for airport delays.