Low-cost Android tablets aren’t unusual; good low-cost Android tablets are a different matter. Advent’s Vega slate – on sale through DSG’s PC World, Currys and Dixons in the UK – bucks the Android trend by carrying a low sticker price of £249 ($395) and decent hardware specs, including NVIDIA’s dual-core Tegra 2 processor. It’s a combination that has seen DSG struggle to keep the Vega in stock for more than an hour at a time, but is this really the bargain Froyo slate we’ve been waiting for? Check out the full SlashGear review after the cut.

Compared to the brushed metal of the iPad or the sturdy compactness of the Galaxy Tab, the Vega’s plastic construction and uninspiring design feels more mundane. Still, it’s also around half the price of those rivals, so we’re more forgiving of the bland aesthetic. The rear panel sounds somewhat hollow when tapped, and squeezing it in the middle causes distortion on the LCD; the edges – where you’re more likely to be gripping – are sturdier. At 275 x 177 x 14 mm it’s reasonably thin, though it’s longer (and narrower) than the iPad.

Up front is a 10.1-inch 1024 x 600 resolution display with a capacitive touchscreen, and we’re not all that impressed by Advent’s choice of panel. Colors are reasonable, and it’s a bright screen, but the viewing angles are poor, particularly the vertical angles. Viewed dead-on in landscape orientation and it’s fine, but lay the Vega down on a table or beside you on the sofa and there’s considerable distortion of the picture, particularly along the bottom edge (where the shortcut bar lives on the homescreen. Flip into portrait orientation, and the shallow angles are even more frustrating, with websites suffering from glare and discoloration. 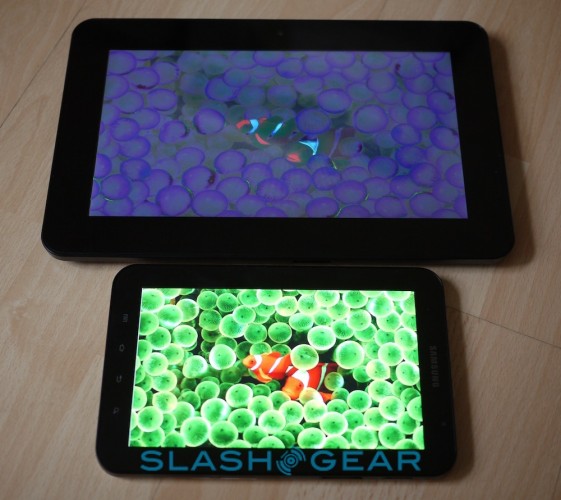 Bar the 1.3-megapixel webcam – which takes unpleasantly fuzzy stills – the Vega’s bezel is completely bare, with all of the hardware controls pushed to the edges of the slate. On the top edge there’s a microphone, power/lock button, a switch to lock screen orientation and a back button, while running down the right side there’s a volume rocker, headphones socket, MicroSD slot (with a 4GB card preloaded), USB port and HDMI port, along with the power connector. A docking connector is on the bottom edge, though so far there are no accessories that take advantage of it, and a pair of stereo speakers are on the back. There’s no dedicated home, search or menu keys, as you’d expect to find on an Android device, though a long-press on the back button calls up the context menu, and a long-press on the power button offers home as an option.

Wireless connectivity is limited to WiFi b/g and Bluetooth; Advent tells us that a 3G-enabled Vega is in the pipeline, but this first model has no cellular modem. While that doesn’t present much of an issue for home use, it does have an impact on what software Advent can use; more on that in the next section.

The Vega scores points for using Android 2.2 Froyo, rather than an earlier version of the Google platform, though if you’ve come to the tablet from an Android smartphone then you’ll likely find plenty missing. Google’s mandatory specifications for Android devices – which the Vega doesn’t achieve – means the tablet lacks Android Market access together with all of the custom Google apps, like Gmail, Google Maps and Google Voice. In fact, the application launcher is surprisingly bare: out of the box you get the browser (with multitouch pinch-zooming but no Flash), calculator, camera app (for use with the webcam), clock, WHSmiths ebooks app, email, gallery, iFileManager, music, search, Sound Recorder and a shortcut to the online Vega help portal. There’s no native PDF or Office File viewer, though, which means downloaded instructions and guides from that portal can’t actually be read on the Vega itself. 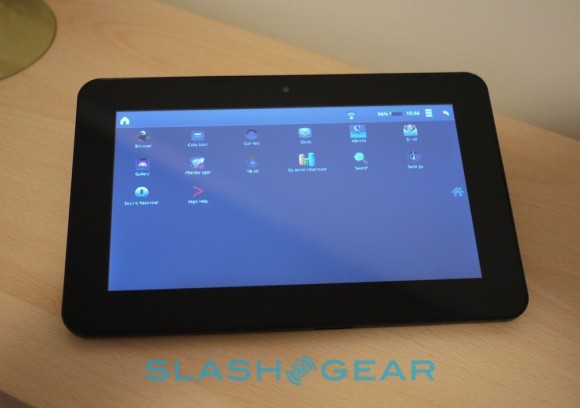 Third-party apps can be loaded via their raw .apk files – you can browse to them at a site like GetJar.com, download and install them with no issues – or you can opt for a third-party application store, such as SlideMe or AppsLib. Still, where Samsung took the core Android 2.2 experience and boosted it to suit the larger-screen Galaxy Tab, the Vega feels like a backward step in comparison.

Advent’s changes to Froyo are minor, the most obvious being to accommodate the missing hardware buttons. A toolbar along the top of the display has a home shortcut on the far left and menu/back buttons on the far right. There are also WiFi, battery and clock indicators. The battery gauge can be sluggish to respond; on several occasions we hit the power button to glance at how much juice was left, then had to wait as the gauge updated to the latest figure. Five homescreen panes mock the absence of apps to fill them with, and a persistent shortcut row along the bottom links to settings, mail, browser, My Media and then the Facebook, Twitter and YouTube sites.

The absence of apps is frustrating, because we can’t really fault Tegra 2’s performance. The browser whips along nicely, rendering even complex sites quickly, and multitouch zooming suffers no stuttering or lag. Screen rotation (in all but the homescreen, which is locked to landscape orientation) is similarly fast. Angry Birds – the .apk install file for which we downloaded in the browser and then installed manually – looked great on the 10-inch screen and played with no issues. We could only access YouTube via the m.youtube.com mobile site – the full site wouldn’t recognize the Flash Player 10.1 plugin Advent had installed – and quality was mixed.

Multimedia playback proved frustrating. We first tried loading a selection of AVI, DivX and other format video clips onto the Vega’s microSD (a microSD to SD adapter is included in the box), but the tablet proved reluctant to show them in the file browser. Instead, we had to use the VegaMedia app, with a companion PC sync manager (Windows only) that you drag files onto and it automatically pushes them over to the tablet. We can’t see any change in format along the way – it literally copies them from your computer to the tablet – but done that way the iFileManager app could see the media.

As for file types, a MKV HD clip proved too much for the Vega to handle, but an SD MKV was no trouble at all. DivX and MP4 were also handled readily – the latter in HD, even. The HDMI output worked well, showing not only the playing media but mirroring everything on the Vega’s display; still, you’re stuck at the same 1024 x 600 resolution when browsing around, so it can look underwhelming on a Full HD panel. 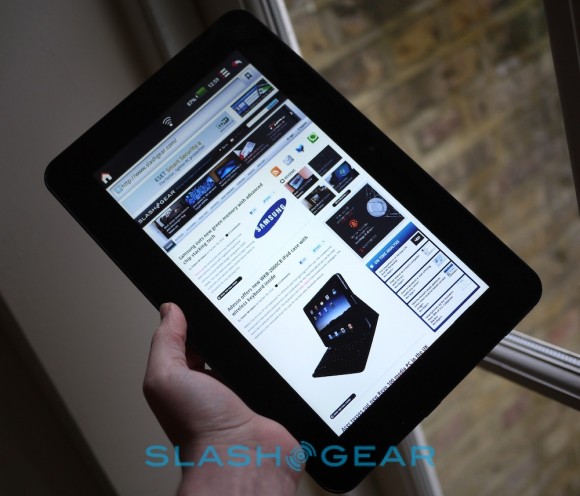 The Vega’s salvation is likely to be in the hands of the Android homebrew community, and there’s already at least one alternative ROM that adds unofficial access to the Android Market along with all the usual Google apps. The process of rooting and installing the Vega is apparently straightforward, and the end result is a far more flexible slate.

Advent suggest you’ll see around 6.5hrs of HD movie playback or up to 16hrs of audio playback (with the screen off) from a full charge of the Vega. In practice, with mixed use – predominantly browsing – we managed a full day’s use before the battery expired, though power draw while in standby was higher than on the Galaxy Tab or iPad. Overnight, the Vega dropped from 93-percent to 69-percent with no use whatsoever. 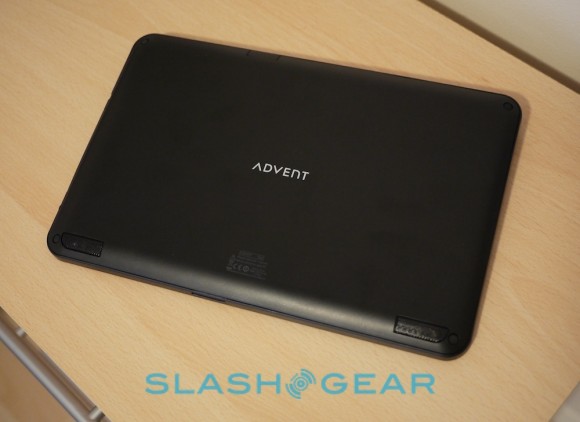 There are times – web browsing, for instance – when we had to remind ourselves how cheap the Vega is, given its performance lived up to other far more expensive tablets. At other times, the cost-cutting required to hit that price reared its head, with the lacklustre viewing angles of the display being a particular frustration. Reading text or looking at photos or video is simply a more enjoyable experience with the iPad or Galaxy Tab’s displays.

Out of the box, there’s definitely a sense that you get what you pay for. Advent could have done themselves major favors by throwing in some custom apps for social networking, IM or video calls, or by preloading things like Fring or Skype. Instead, there’s a webcam that only gets used to take vanity stills and a processor that’s massively under-utilized.

Spend some time tinkering, however – whether that be the basics of installing a third-party app store, or going the more complex route of flashing an alternative ROM – and the Vega proposition is far more appealing. That appeal seems to have caught the Android dev community, for whom Advent’s limitations are of no real consequence. Mainstream users, however, will likely find the Vega underwhelming in its pure form.